GosT Blends Metal With Moroder and Horror Movies on ‘Maleficarum’

Not to be confused with skeleton mask-wearing Swedish metal band Ghost, skeleton mask-wearing American solo project GosT specializes in bridging extreme metal with the more synthetic tones of darkwave, dance, and classic horror soundtracks. Like labelmate Perturbator, its black-metal-meets-Moroder sound is sleek, energetic, and very catchy, propulsive enough to compel the stodgiest of underground metal fans to dance rather than mosh.

GosT’s new album Non Paradisi will be released September 30 on Blood Music, and a haunting video for the hyper-intense track “Maleficarum” has just been completed. Directed by Daniel Schwartz of critically acclaimed band Astronoid, it takes its visual cues from some very well known films, which GosT was all too pleased to explain to SPIN.

Watch the video and read our conversation with GosT (real name: Ba’albe-rith) below, and be sure to pre-order Non Paradisi here.

What’s the inspiration behind this video?
For me personally, the most obvious inspiration for the video is the film The Witch by Robert Eggers. Beyond the obvious, movies from the 1970’s era of satansploitation films were a big inspiration. Films such as Satan’s School for Girls, Satan’s Blood, The Satanic Rites of Dracula, The Omen, etc.

How did you get in touch with Daniel Schwartz, and how do you feel the video turned out?
He plays in the band Astronoid who is, like me, signed with Blood Music. Blood Music showed him the new GosT record Non Paradisi, and he was immediately struck by the track “Maleficarum”. To my knowledge, his previous video works were purely lyric videos with star-like illustrations in the background. After hearing “Maleficarum”, it was Daniel’s idea to shoot a live action video. We were surprised and excited to see what he would come up with and very pleased with the end result.

What drove you to combine extreme metal and Moroder-inspired darkwave like you’ve been doing with GosT?
I have always played in metal bands so metal will always be a part of my musical process and attitude. Metal fans are intensely loyal to the genre, and I am no different. Both musically and visually, metal found its way into GosT. I have always had a soft spot for synthesizer-driven music as well. I grew up in the 1980s and always obsessed over that era of horror films. The bulk of 1980’s horror utilized synthesizers for their soundtracks, and that is something that I will forever hold dear. Films like Halloween, The Gate, A Nightmare on Elm Street, Fright Night, Phantasm, plus so many others had stellar synth soundtracks that to this day influence me greatly.

With Perturbator, S U R V I V E, Zombi, and John Carpenter’s recent musical renaissance, this style of music is resonating with a lot of people. Why is it happening? Why now?
Synthesizer music and scores done well are timeless in my opinion. These sounds are from the past but also sound like they could be from the future. I think one reason there is a resurgence in this style is because a lot of people who grew up during the ‘80s are now adults creating their own art.

Plus today’s films seem to lack a bit of the soul that ‘80s films had. Films during the ‘80s felt real. The actors, the sets, the music were all so gritty and emotional. The Goonies seemed so possible when I was a kid. I thought, “Yeah, I could totally find a pirate ship with my friends.” Maybe with how over-produced and over-the-top movies of today tend to be people are hungry for something “real.” Hungry for art that actually moves them emotionally rather than just distracting them. 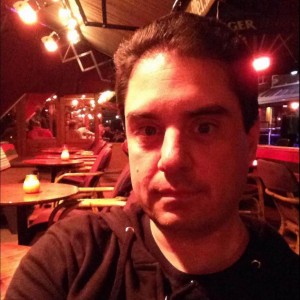