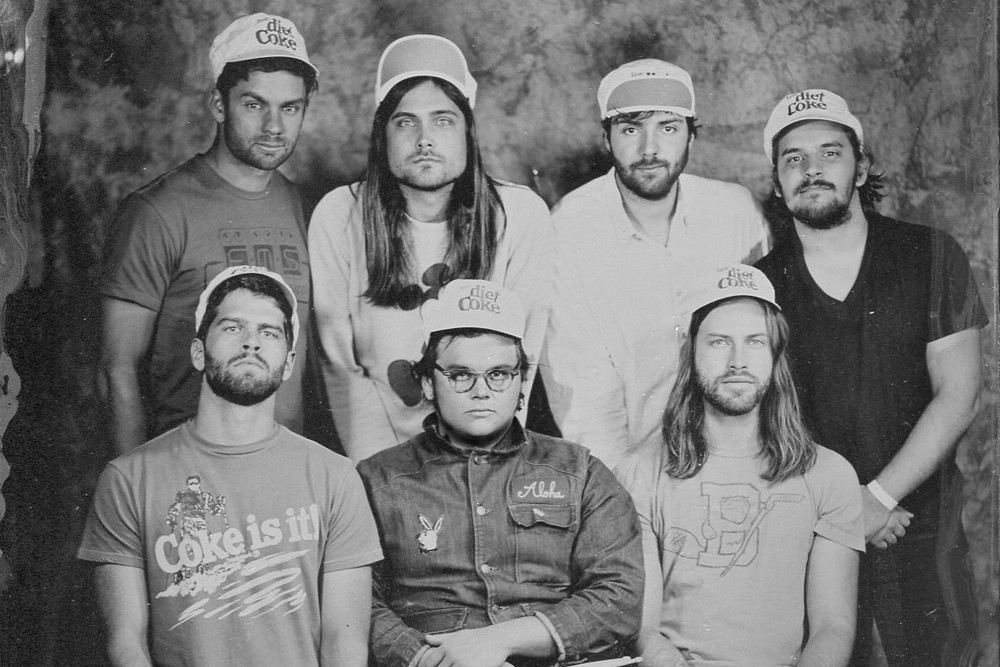 What kind of a lifespan can a band named Diarrhea Planet expect to have? The Nashville sextet’s second album, 2013’s I’m Rich Beyond Your Wildest Dreams, sought to buck surface expectations and skeptical eyebrows with a series of glitzy, ’70s-style solos, Joey Ramone-in-KISS-paint vocals, and Super Soaker pop-punk riffs. Its relatively polished follow-up, Turn to Gold, instead wants to ascend out of the take-nothing-seriously slophouse and demonstrate the sort of advancement expected of a band that’s been together for seven years.

In order to do that, the quadruple-guitar-toting six-piece experiment with cleaner production (courtesy of the Grammy-winning studio guru Vance Powell), sincere singing rather than bratty chanting, and lengthier tracks (behold the epic eight-minute closer, “Headband”). There’s still plenty more of the same — just grander in scale. All-instrumental opener “Hard Style 2″ is a drum-led march that gives way to a series of towering guitar leads, which could at any moment segue into Freddie Mercury going “Nothing really matters….”

The authoritative “Announcement” finds lead hooligan Jordan Smith declaring a sort of personal independence: “Man, I get so sick of everyone shouting / To try and tell me how I should live my life / I just want to cruise and if I lose control / I’ll find a better way to make it right.” That appears to mean singing like Evan Dando doing Van Halen’s Roth-era material. A large swath of the material on Turn to Gold follows this pattern, putting various decades and rock-star karaoke impersonations in a blender.

That subconscious Lemonheads fetish is real, by the way, as Gold’s mid-tempo “Let it Out” plays like a near-cover of the quintessential ’90s slackers’ resigned semi-classic, “It’s a Shame About Ray.” It’s followed by the surprisingly diaristic “Bob Dylan’s Grandma” (“It had been my dream / To race F1 or fly F-16s / I’ve got the next best thing / To cut my teeth on these six strings”), a chunky pop-punk brawler à la late-’90s Green Day. There’s an admittedly lovely and un-punk acoustic flourish toward the end, an unexpected moment where this shredding army embraces a rare less-is-more philosophy.

Dig through the arena-rock potpourri, though, and you’ll unearth a few substantive — and anxious — observations on heavier topics like gentrification (“Hot Topic”), romantic commitment (“Ruby Red”), and the angst of feeling “weighed by the things I can’t control” (“Lie Down”). But it’s hard to absorb anything singer-guitarists Smith and Brent Toler say when they’re being drowned out by superfluous fretwork. While that’s indeed their schtick, they’re standing in their own way and therefore preventing any real attempts at progression.

Turn to Gold will undoubtedly translate better blasting out of stage speakers, the medium most ideal for unfettered solos and melting six-strings — their riotous late-night debut could barely be contained behind a screen. On record thus far, though, Diarrhea Planet’s instrumental split-personality excess could use a dose of Imodium.