According to a press release, the band will feature neither opening acts nor any additional musicians beyond themselves. There’ll be two sets per show, separated by an intermission, and there’ll be a mixture of new, untested music as well as reinterpreted classics and oft-overlooked oldies. Per the release:

Though the scale of the venues and band will be reduced, the live production will be characteristically stunning, designed again by the team behind their previous knights of illumination award-winning tour. 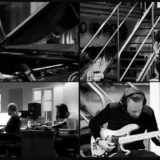