SPIN staffers select their must-hear Prince songs in tribute to the late, great Purple One 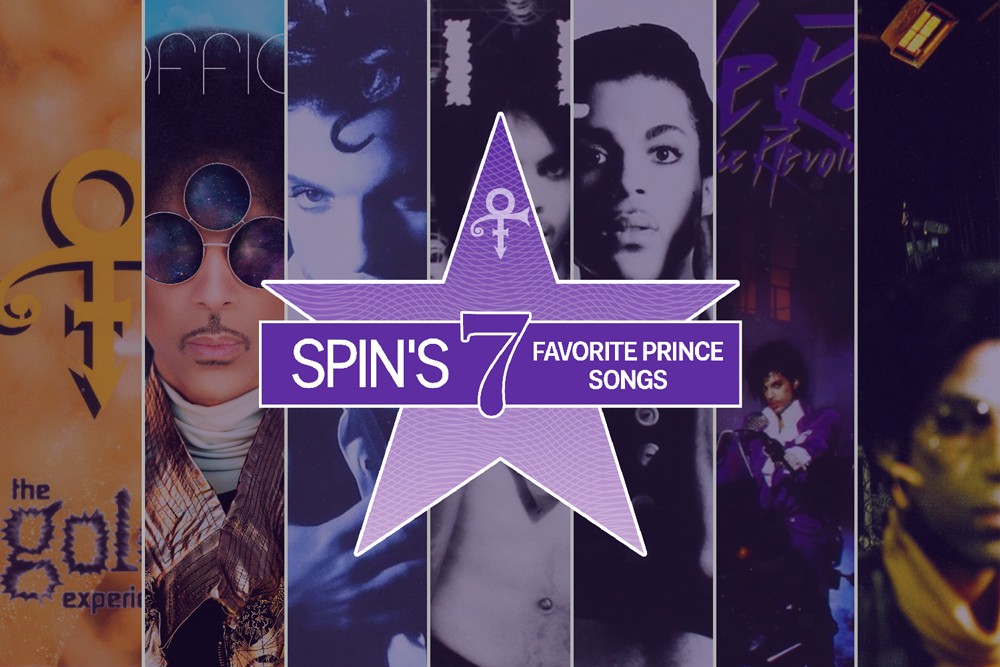 In light of Prince’s passing, SPIN is dedicating its weekly 7 Favorite Songs column to the departed pop icon. To be clear: This is not a list of Prince’s top songs (we did that back in ’09); rather, these are personal favorites from a staff of seven people who are mourning a legend. C’mon, baby, let’s get nuts.

“Kiss,” (Parade, 1986)
However you first puckered up to this classic — via ’80s musical Under the Cherry Moon; its accompanying soundtrack/album, Parade; or (if you were like me) watching Julia Roberts soak in Richard Gere’s tub — the surprisingly minimal, funk-filled “Kiss” remains as culturally omnipresent and ageless as its sex-symbol performer. A heartfelt and equal-opportunity invitation to spend your “extra time” with the Purple One, “Kiss,” with its onomatopoeic smooch-smooch-smooch-smooch-smooches, didn’t require the object of its affection to woo the singer with superficialities like “beautiful” or “rich” or “cool.” All you had to do was leave it all up to Prince’s sensual self. If satisfied, he’d return the favor. — RACHEL BRODSKY

“I Could Never Take the Place of Your Man,” (Sign o’ the Times, 1987)
Prince was infinitely more talented at making music than I’ll ever be at making sentences, so it’s probably futile for me to try and do his genius justice. What I can describe for sure, though, are the feelings I get whenever I listen to Sign o’ the Times’ “I Could Never Take the Place of Your Man.” How those handclaps instantly make my ears perk up; how the speedy buildup at the end of the first verse (“I asked if she wanted to dance / And she said that all she wanted was a good man”) always brings me to the verge of some embarrassing dance move; how hearing Prince recognize heartache in another soul and sidestep his sex-panther persona fills me with a twinge; how that final guitar solo never fails to steal my attention and leave me dumbfounded. Actually, another thing I feel qualified to say: No one will ever take the place of our man. — KYLE MCGOVERN

“U Know,” (Art Official Age, 2014)
SPIN’s Dan Weiss was right when he said that Prince never fell off. The Purple One’s most recent albums — ART OFFICIAL AGE (2014), the HITnRUN series (2015), and even PLECTRUMELECTRUM (2014) — are all worthy continuations of his earliest artistic statements, proving that the gender-bending icon never changed for the times; the times changed for him. “U KNOW,” which premiered on SPIN two years ago, is warped and seductive, flowery and bristled. Its falsetto moans, throaty ad-libs, and minimal production recall moves that modern-day R&B artists like the Weeknd and Bryson Tiller have only just begun to adopt. It’s only a matter of time before Prince’s storied vaults open up, but until then, remember that the 57-year-old legend’s catalog never ran out of steam. — BRENNAN CARLEY

“Thunder” (Diamonds and Pearls, 1991)
Some believe Prince’s ’80s decadence is a foot-in-the-door technique for Christianity. “Darling Nikki” was foul enough to make Apollonia cry, but it was all good because he wrapped Purple Rain up by submerging everyone in baptismal waters. That closer is justifiably regarded as peak Pastor Prince. But there’s the water and there’s the burning bush. “Thunder” doesn’t build to a grand climax as much as it makes room for a variety of them: garish gothic thumps clash with sitars, a guitar screeches and slithers as it pleases, and Prince has that opening apocalyptic passage (“Thunder! All through the night / Promise to see Jesus in the morning light”). And it works because none of the elements swallow the star in the middle. If there is a pinnacle, it’s when the clouds temporarily scatter as a howling Prince leads a clapping choir, a reprieve in this brilliant, debauched hosanna. — BRIAN JOSEPHS

Listen to “Thunder” via TIDAL

“Sister” (Dirty Mind, 1980)
Prince tossed off his all-time dirtiest lyric on a 91-second jangle-punk rave-up that was more Plimsouls than classic soul. “Less is more” is hardly a maxim you’d associate with one of the most prolific and ambitious recording artists in rock history, but “Sister” — which, yes, concerns an adolescent Prince receiving his sexual education from his parents’ 32-year-old daughter — is all about that brevity. He drops a couplet like “She don’t wear no underwear / She says it only gets in her hair,” and while your brain is still expanding to wrap itself around the lyric’s unfathomably filthy implications, he’s already reached his conclusion: “Incest is everything it’s said to be.” Bawdiest of all may be that once finished, the song comes off neither as cautionary tale nor titillating endorsement; just one page of many in pop music’s greatest diary of Purple prose. — ANDREW UNTERBERGER

Listen to “Sister” via TIDAL

“Endorphinmachine” (The Gold Experience, 1995)
I could’ve written about “When You Were Mine” or “Lady Cab Driver” or “U Got the Look.” But 1995’s “Endorphinmachine,” from the criminally long out-of-print The Gold Experience, is the Prince song I want you to hear right now. It’s the hardest he ever rocked on record, pretty damn close to Aerosmith, actually. But of course it’s not that simple: For the finale, he raps the breakdown over a brief interlude of squelching funk and screams at the top of his register à la Axl Rose not once but twice. Oh, and there are wind chimes. The upfront-produced crunch is all post-grunge and hard-rock era; he never could’ve made this song in the ’80s. It probably destroyed arenas. Doubt it’ll leave you in one piece either. — DAN WEISS

“Let’s Go Crazy” (Purple Rain, 1984)
Since we learned that Prince was gone yesterday, no words were shared as frequently as the opening lines of “Let’s Go Crazy”: “Dearly beloved, we are gathered here today…” Who could get away with writing an elegy for life itself at age 26? Someone who Gets It, that’s who. “Let’s Go Crazy” has the unbridled joy of hedonism and the reassurance of a prayer, rolled into one of the all-time best album openers. Look how happy the cast of Hamilton is about this song. Forever is a mighty long time. Prince paved the path to enlightenment straight through the dance floor. — ANNA GACA