Porches: A Synth-Obsessed Songwriter Learns to Be Alone (But Not Lonely)

Home » New Music » All Eyes On » Porches: A Synth-Obsessed Songwriter Learns to Be Alone (But Not Lonely)

On “Be Apart,” a morose synth-bit confessional from Porches‘ crepuscular new LP, Pool, it sounds like Aaron Maine is having a hard time making up his mind. “I wanna be apart,” he sings, with the flat-yet-undulating intonation of a reluctant karaoke singer trying to nail a pop smash — first by himself, and then joined by the faint backing vocals of his romantic partner, singer-songwriter Frankie Cosmos. “I wanna be apart,” he begins again, only to lazily let slip the “gotcha!” twist: “…of it all.” Later, when telling SPIN about his relationship (“We’ve spent every waking and sleeping hour together since we started dating four years ago”), Maine admits he hadn’t connected that song with his relatively newfound desire for musical separation — even after adding, “It’s like learning to be apart.”

Such a verbatim coincidence is a little hard to believe, but the accidental slip reveals how intertwined Maine’s career has been with that of Cosmos, a.k.a. Greta Kline. The two similar-minded notebook scribblers and knob-twiddlers stinted in each other’s bands until late last year, when they decided together to separate (somewhat) in the lead-up to their respective album releases. Of course, there are caveats: Kline appears, as fleeting and illuminated as the specter of a past relationship, in the glowing, lonely video for Pool centerpiece “Hour,” which Maine wrote when they first started dating. “I started to get angry when publications would try to lump us together, like ‘We want to follow you guys around,’ ‘What it’s like living together,'” the 27-year-old Westchester native says at a coffeeshop in Manhattan’s Flatiron district. “Like, it’s not really your business. I want to focus on the projects, which are two different things.”

Pool, which arrives today via indie stronghold Domino Records, is even distinct from Porches’ past releases — and not just because this one is more of a “legit thing,” in his words. (“I’m making some money finally,” Maine says, recounting how his mother didn’t believe that he had a publishing deal. “There’s an LLC.”) The project’s evolution, right down to its fine-tuned punctuation shifts, is right there on his Bandcamp: PORCHES. experimented with organs and atonalities on 2011’s Summer of Ten and Je T’Aime (and, later that year, adopted a swaggering, drug-addled alter-ego on 2012’s Scrap and Love Songs Revisited); Porches. went acoustic on 2013’s Slow Dance in the Cosmos, and took on the alias of disco don Ronald Paris on a 2014 release bearing the same name. “There’s the same characters that pop up,” he says of his various noms de plume. “I see the connections.”

Though the songs on Pool were, well, pooled from demos and sketches and alternate versions Porches amassed in the past couple of years, they form a hazily cohesive arc, like a recurring dream of surprisingly realistic scenarios. Album opener “Underwater” draws you in, he explains, with tremulous keyboards and momentarily unnerving harmonies that obscure where his voice ends and another (Kline’s?) begins; his vocals are completely submerged in Auto-Tune by the time time stinging bursts of 505s kick in on closer “Security.” Many of them are rewrites; he says “Hour” was a B-side from Slow Dance. It’s not online, so there’s no way to hear or verify that, but beneath its polished shell lie the lyrical bones of being lonely and in love, similar in content and structure — if not production value — to those on that largely acoustic-driven 2013 LP. 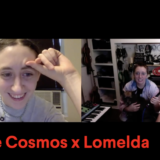 “A lot of the process of making Pool was trying to recreate that magic and that excitement of discovering new sounds,” says Maine, who has been amassing analog synthesizers and drum machines since stumbling upon a Casio keyboard in 2009 or 2010, while on tour with a band called Space Ghost Cowboys.

It was on that several weeks-long run of dates through the frigid mid-winter Midwest that Maine realized he would rather make music than paint, which he was studying in college at SUNY Purchase. Following the trajectory of his father, folk musician and house painter Peter Maine — who’s thanked in the Je T’aime credits — he worked construction in his former home county of Westchester and wrote songs on the side. Then, a year after he moved to New York City and started recording as Porches while commuting to his job, Maine threw in the paint-splattered carpenter pants. “It took like an hour and a half to get home after work, and then I just couldn’t even begin to do anything else,” he recalls. So he stopped fiddling around and started getting “psycho productive,” finishing six releases in six years.

Now, his work is his life, and much of his life is Greta Kline, and he’s still trying to find that balance — he’s just a little more successful this time around. “For both of us, we’re less stressed out. There’s less running around,” he says. “If one of us has a s**tty show or a s**tty band practice, one of us is like, ‘It’s OK,’ as opposed to us being both like, ‘F**k that.'”