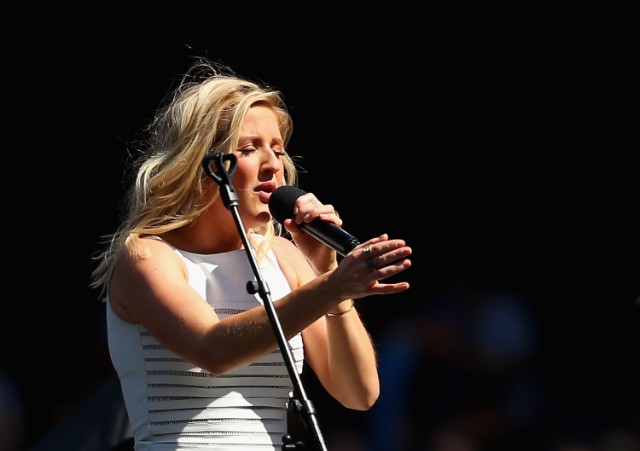 “I love that people are curious about what kind of artist I am. Who knows where my next album will go?” Ellie Goulding said to me in 2010, in a tiny Scotland venue most renowned for being the place where Oasis were discovered. The fidgety upstart did some yoga, spoke about her love of drums, gushed about Björk, Four Tet, and Bon Iver, and was reluctant to identify herself as a pop star. Despite experiencing enormous hype and winning a Brit Award before even releasing a full-length, Goulding wasn’t ready to fulfill that part of her mission.

In the past five years, Goulding’s X-factor has been her refusal to be pigeonholed. Her boundless energy is reflected in high-impact electro-pop that’s morphed from wispy (2010 debut Lights) to aggressive (2012’s Halcyon), with number-one U.K. chart success for both. Collaborations with Major Lazer and Calvin Harris found Goulding flexing her versatility for arena and club audiences; she’s been as unwilling to be boxed in as Rafael Nadal is to stick to one tennis surface. Until now: With the release of third LP, Delirium, a self-confessed “big pop album,” Ellie’s coming into the proverbial net, low on ballads and armed with 16 bangers to pelt at fans and peers alike.

Glancing at the tracklist shows that many of the song lengths are a uniform three minutes and 46 seconds, and the production credits boast assists from big guns Max Martin and Ryan Tedder, as well as Greg Kurstin (Sia, Adele). Goulding here follows the strategic full-throttle assault by #squad colleague Taylor Swift, abandoning prior nuances and building a ferocious live presentation to boot. The driving, ’80s-reminiscent chorus of “Something in the Way You Move,” the jaunty Ed Sheeran-baiting smash “On My Mind,” and the Lykke Li-styled piano’n’claps of “Holding on for Life” all make for a euphoric and diverse spectacle. Finally, she’s embracing the responsibility to provide stone-cold tunes without pretense.

Her husky vibrato does appear more restrained, but her low register on Fifty Shades of Grey smash “Love Me Like You Do” and the tropical, whistle-abetted “Keep on Dancin'” make for some of her most compelling top lines yet. The latter highlights how Goulding has found a way to incorporate her favorite music into her own creations, leaning on a certain Diplo hit. Perhaps she’s finally come to terms with playing in the major leagues because she’s sussed out the sweet spot between pop homogeneity and experimentation. Announcing herself as a star is no risk. The risk would have been to disown what was obvious from the start.