Five Artists to Watch in September 2015

Summer has not technically come to a close just yet, but brisk mornings and sweater weather are on the way. Ring in the end of the season with a batch of five new artists — including a smoky-voiced 15-year-old singer with the confidence of a pro, a young Matador signee with two full albums on the way, and a jazz-educated psychedelic throwback out of Chicago — who are all worth every second of fleeting warmth.

Who: Virginia native-turned-Seattle resident Will Toledo — the lo-fi prodigy known as Car Seat Headrest — is only 22 years old, but he’s got the fully-realized songwriting prowess of someone at least, oh, say, 30: “I co-write the songs with myself / He feels the feelings, I write the words,” he kids on the sung-through-a-tin-can anthem “Beast Monster Thing (Love Isn’t Love).” The just-announced Matador signee will unveil two back-to-back records soon: Teens of Style this October and Teens of Denial in early 2016. But the prolific Toledo currently has self-released 11 (seriously) albums on Bandcamp.
Sounds Like: If the Strokes left the garage and entered the bedroom, if Built to Spill collaborated with Grandaddy, or if Radiohead reverted back to their Pablo Honey era — all in the form of one person.
Where to Start: In order to keep from feeling overwhelmed, go with How to Leave Town first, which features 14-minute long-form experiments like opener “The Ending of Dramamine” and traditional indie-rock heart-squeezers like the mid-tempo “I Want You To Know That I’m Awake/I Hope That You’re Asleep.” — RACHEL BRODSKY 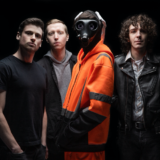 Who: A burgeoning teenage pop sensation from Portland, Oregon, who has already found herself a number of high-profile champions: Beats 1’s Zane Lowe has been pushing her cotton-candy-bombed single “Jitter” relentlessly, and pop blog Popjustice basically launched a state investigation into how it was possible to hear the song online. It was worth the hunt: “Jitter” isn’t just one of the pop songs of the year, it’s three or four of them, fastballing between combusting trap-pop, French-dropping dance-soul, turbo synth-rock, and back without ever losing its flammability.
Sounds Like: Lana Del Rey teaming up with Jack Ü, the Weekend, and/or Foster the People, depending on the song.
Where to Start: Nothing else on Mitchell’s Raceday EP is quite as explosive as “Jitter,” but it’s still immaculate big-budget pop, bursting with hooks and ideas. — ANDREW UNTERBERGER

Who: With a debut EP out in October, Loren’s a 15-year-old pop sensation from Walloon Lake, Michigan waiting in the wings. According to the young lady herself, she wrote and arranged her first song seven years ago — as an 8-year-old — and her smartly rounded lyrics do the necessary fence-riding between accessible and engagingly unique storytelling. Her voice brushes down on its lowest register with a quiet husk, lending her songs the proper depth for maximum impact.
Sounds Like: If Sia held back her register for a quieter, achier impact while Lorde egged her on.
Where to Start: The Dare is out in only a month, but get cracking on your pre-EP homework with the faded pixie dust of “Echo.” — BRENNAN CARLEY

Who: Alexander Brettin studied jazz in Chicago once upon a time, before ditching that urban tundra and eloping to laid-back Los Angeles with new label Stones Throw Records. The result of this cooler-than-cool union is Mild High Club’s debut LP, Timeline (out September 18) — a psychedelic 60’s throwback that sounds way more West Coast than Midwest. Brettin’s complex musical arrangements — incorporating harpsichord, tambourines, electric guitar, woodwinds, and vocal harmonies — are head-swayingly hypnotic. Mild High’s melodies are refreshing in their simplicity, harkening back to the days when the studio was an instrument and songs topped out at three minutes. MHC’s chill, cerebral, and spaced out: the stoner-philosopher of 2015.
Sounds Like: If John Lennon and David Bowie crashed the Pet Sounds recording sessions.
Where to Start: “Windowpane,” a twinkling slow-motion jaunt through Strawberry Fields. — ANDREW STONE

Who: The production moniker of London DJ/producer Louis Carnell, who’s been churning out third eye-opening revisions of grime since he was just a teenager. Last year he opened a slate of dates for FKA twigs, who’s a peer in approach if not in sound. His cold-blooded take on dance sonics (iced out synth lines and gunshot percussion) is similar to how twigs treats pop music: Rip out the skeleton, dress it up in new clothes, leave the old flesh to rot.
Sounds Like: A frigid night standing just outside a club.
Where to Start: “Victim,” the lead single from his forthcoming LP, Safe. — COLIN JOYCE