The bangin', cake-throwing, champagne-spewing DJ and producer has a vision 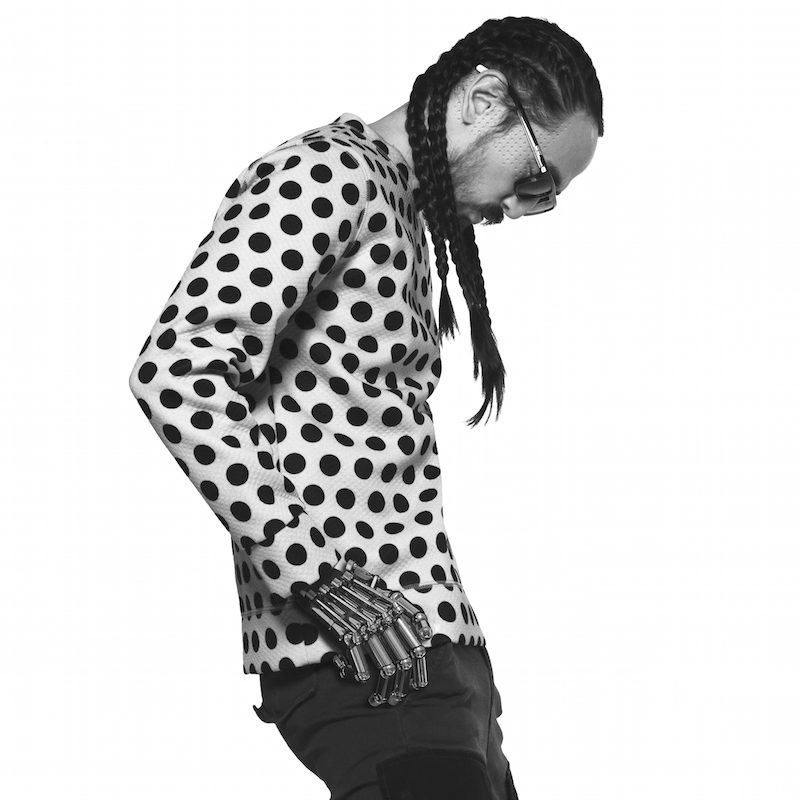 To finish Neon Future II, his third studio LP and the conceptual follow-up to last year’s Neon Future I, Steve Aoki cut down his extraordinary touring load. “I went from 300 shows in 2013 to 220 in 2014,” he tells SPIN in the lobby of the Grand Hotel in Manhattan. The notoriously hardworking DJ and producer seems a bit crestfallen at the realization of missed, beloved hours clocked in the studio or on the road (or perhaps he’s just waiting for an imminent cappuccino to wake him up) so his manager next to him adds, “Which is still more than anyone else.”

Aoki, who will be taken away from the road and the studio for two weeks again when he has vocal cord surgery for a node, takes small comfort in this.”Two weeks of vocal rest is going to be really hard,” he says of his voice. “I’ve never done a full day of vocal rest.” He first broke the news to fans via Facebook, and the prognosis is indeed dire: “For the past 20 years, all the screaming at my shows have severely messed up my vocal chords. As a result, I have to get surgery or else I cannot even speak anymore.”

Though Aoki will no longer throw his signature cake at fans during non-headlining shows when he is back at it after forced vocal rest, he continues to go hard behind II, which sees him back off from big-stage bangers toward more song-oriented fare. Recorded in five different studios in Los Angeles, Aoki’s adopted home of Las Vegas, and New York City, his new record features a slew of special guests like Fall Out Boy’s Patrick Stump on hard-in-the-paint banger “Back to Earth,” Weezer’s Rivers Cuomo on rainbow road jam “Light Years,” and even Snoop Lion on the reggaeton-minded “Youth Dem (Turn Up).” “I like to work in different environments to make sure sound transfers between each place,” Aoki explains of his geographic meanderings. “Of course, you have to listen to it in your car because that’s how people listen to music.”

When he’s not recording his next album — which, yes, he’s already started on — Aoki’s being a good Samaritan, throwing free downtown L.A. festival LAoki in part to enlist volunteers for citywide rehabilitation and drought awareness canvassing. “I’ve always wanted to be a part of bringing about positive change in communities I’m a part of,” he says. Even in Las Vegas, he’s become involved in a campaign to bring the NHL to the city; never mind being too busy for organized sports himself.

Shortly following the release of Neon Future II, Aoki sat down with SPIN to discuss the record, his vision of a “neon future” involving telekinesis and humans being able to do whatever they want, and of course, sometime collaborator Ray Kurzweil.

How did LAoki go?
It’s an experiment still for the city to do something like this. They’ve had Made in America and this. Anything can happen in the middle of downtown L.A., and it was a free show. They’re tearing the concrete out of the 86th Street Bridge (where they do the Grease race) and rebuilding it with walkways, jogging paths, bike trails, and a lot of graffiti artists for the largest mural in the world. This party, at least, is helping on that front: Seven thousand people signed up [at LAoki] through the volunteer program to go door to door about the drought, talking about conserving water. The mayor has got to be the coolest politician. When we talk we talk about music, he talks about the jazz he was into and old Japanese electro-pop bands. I love hanging out with him.

When I played “Home We’ll Go (Take My Hand),” I said to the crowd, “This song is dedicated to the city because this is where I’m from.” No matter where I move, L.A. is my home. It’s where I built my career, have had major accomplishments. Most of my biggest songs were produced in Los Angeles in my studio. It was kind of one of those heartfelt moments, especially when you see people singing along to that song.

A lot of DJs have been incorporating live instrumentation into their sets. Will you do that for the Neon Future II tour?
It’s not like an Ableton set where I can cue in a synth, or some drum triggers, or anything like that. I’m just playing it off of a USB stick. The other component that’s actually being triggered live on the Neon Future Experience tour is the live production element. There’s a pretty elaborate stage layout with these cubes that are triggered from a lighting guy and visuals guy, four different LED panels — just that alone took months to put together, plus it just cost a lot of money to have ten people set the stage up and tear the stage down every single show, two semi trucks carrying production, robots on stage… It’s all part of this Neon Future world. As far as live playing, I only do that every so often. At LAoki Travis Barker came out and played drums on my final song.

Do you see the future of music as being more visual?
That’s how I see it. For the most part, you can do a Neon Future concept without any music, like androids, Ex Machina or whatever. The reason for these science fiction movies is because we’re already kind of leaning in that direction. To me that’s what’s exciting — not just that it’s great imagination, but that these concepts are becoming real science. They’re changing people’s lives. People that can’t walk can walk again, people that can’t see can see again, can’t hear can hear, people that can’t use their body at all are being able to telekinetically have machines bring things to them or have them move.

The idea of telekinesis is bizarre and crazy. People have ways — I’m not sure exactly how — but they can think things and the machines are doing it for them. That’s 2015, and I think this technology is as early as ten years ago.

What about the possibility of machines taking over and turning against their creators?
That’s the movie plots. What movie could you watch where it’s a happy ending, or there’s no conflict? That’s why it exists. I feel like whenever we introduce a new technology, something that affects the whole word, there’s this huge scare, some religious issue with something happening, so people try to stop it, and then we survive. We’ve been there with Y2K, all these other things; we’re like, “Okay the internet has reached everyone. Now the world is going to combust!” As we progress with technology, I don’t want to be totally clueless, but I feel like we always create safeguards that will protect us for the most part. Even Elon Musk, as much of a futurist as he is, he still has these issues with robots taking over.

Does Ray Kurzweil, who’s featured on Neon Future I, listen to your music?

I don’t know. When I visited him in his apartment, there was another artist I didn’t hear of that had mentioned him or something in a song, and he had that artist’s album on his wall. I wrote a song called “Singularity” in 2012, and I asked him to cameo in the music video, and he did it and was really proud of it. Then, when I had him on Neon Future I got to interview him and then we became friends. Now I can ask him questions about cool future stuff directly. I don’t call him. I’m not like, “Hey, what’s up Ray?” It’s more the email side of things.

One of the cool moments for me came full circle when we were both playing on his Kurzweil keyboard. Outside of technology, he invented the first synthesizer to emulate sounds from analog instrumentation, the truest sound of analog instruments — violins, orchestra sounds — so it’s cool that outside of being who he is with the singuarity and future science, he’s actually connected to the music world.

Was it important for the artists who appeared on Neon Future II to share your vision?
I kind of gave everyone the blueprint for what Neon Future was about, but I wasn’t like, “This is my thesis…” I think everyone generally can agree that the future is bright, so with that in mind, there was no real, like, “No, I’m not going to be a part of that.” With some artists I really wanted them to actually narrate and be a part of the concept outside of the music. With Luke from Empire of the Sun, it was really important we workshop the song together. I worked closely with him to develop the idea and the topline in the studio with him. Being in the studio with him, finding out how he works, it made me realize he was one of the most prolific artists I’ve ever worked with. The Linkin Park song [“Darker Than Blood”], it was a chameleon evolving into a human, really. Maybe a monkey to a human is better. We didn’t come from chameleons.

Producers, especially in an electronic space, produce to the current sounds and cultural space of what music relates to, and get it out as soon as possible. The idea for “Darker Than Blood” spawned from over three years ago. We started writing the song in January of 2013 with “A Light Never Comes,” a collection of ideas we started coming together, so we said, “Okay, let’s actually spend the time developing these into songs.” Every five months we’d come back to it and say, “Let’s keep this section because this is an idea that lasted five months; it didn’t deteriorate away because a trend moved or whatever.” In 2015 when we finally released a song it didn’t feel like ideas from 2012. It sounded like a classic.

I know Neon Future II just came out, but what’s next for you?
I already have enough songs to do another album. I’m excited for the new collaborations that would be on the next project. Echosmith are going to be on it. They’re great. We have a song together that’s almost done, I just have to re-record her singing it and I want them to replay some of the instruments. I’ve been working on a ton of songs with a lot of different producers to do fun club records. I’ve debuted one with this producer who was originally a hardstyle producer, Headhunters, who’s more in my world.

The Future Experience tour is actually the perfect time to write music on my bus. The next stuff that’s going to come out is going to be more club-oriented, DJ tools and stuff for DJs. Neon Future I and II are songs. I don’t know how many people can actually play them out. Steve Aoki is a performer as much as an artist.