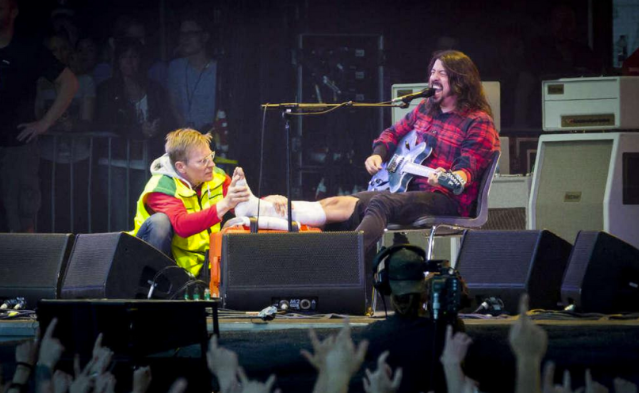 Dave Grohl broke his leg by falling off the stage today during a Foo Fighters performance in Gothenburg, Sweden. But, trooper that he is, Grohl kept right on performing. It sounds like the injury may have occurred while the band was in the middle of covering David Bowie and Queen’s classic “Under Pressure”? It looks like he is, in fact, under pressure because he came back out in an attempt to keep performing for the crowd. Watch it all unfold below; thanks to Stereogum reader Magnus aka commenter Underglad for the tip.

There seems to be a trend in musicians injuring their legs this summer — Rae Sremmurd’s Slim Jimmy was badly hurt during their Governors Ball set last Friday. Stay safe out there guys.

UPDATE: Swedish site Afton Blade reports that the band was playing “Monkey Wrench” when Grohl’s injury occurred, and launched into a string of covers, including “Under Pressure,” while he received medical attention. The band and Grohl then performed “The Pretender” while a doctor treated his leg, before he once again had to exit the stage to get more medical attention. Also worth noting is that he publicly promised the crowd the Foo Fighters would return to make up for the show.

Thank you Gothenburg. That was amazing.