With a résumé that begins with the epochal recording of Terry Riley’s minimalist zenith In C in 1968 and stretches into the 21st century, trumpeter and composer Jon Hassell’s has blazed a trail across five decades of contemporary music. He studied under Karlheinz Stockhausen (alongside future members of Can) before collaborating with Terry Riley and La Monte Young in the late 1960s and early ’70s. Heavily influenced by Miles Davis’s riotous electric album On the Corner, Hassell’s own music fused minimalism to Indian ragas, African tribal field recordings, and African-American funk’s heavy low end. “Hassell’s was a music I felt I’d been waiting for,” Brian Eno once said of his longtime colleague, a clear influence on his own work. Hassell’s musical vision forded what he deemed “fourth stream”: a globalized music that was a hybrid of modern and ancient rhythms, imposing no hierarchy upon the sounds. Rather than being rooted in the academic, Hassell’s base was in the carnal and physical.

Hassell’s collaborators run from Eno and Tears for Fears to Peter Gabriel and David Sylvian. And as hip-hop and electronic dance music emerged on the musical landscape, Hassell also took them in, working with artists as disparate as Organized Konfusion, 808 State, Techno Animal, and more recently, Carl Craig and Mortiz von Oswald. Rubbing off on contemporary producers like Ricardo Villalobos and Maxmillion Dunbar (who even put together an all-Hassell mix), Hassell and his borderless music continue to find devotees. With an expanded three-disc edition of his 1990 album City: Works of Fiction released this month, Hassell’s formidable and prophetic sound can be heard again.

Now living near Venice Beach in California, Jon Hassell and his two dogs welcomed me into his home to discuss his history. Tacked up throughout his modest home were Post-It notes offering reminders like “FOCUS,” “BREATHE! (EXHALE),” and an Elizabeth Warren quote. On a brutally hot day in Los Angeles, he served up sweet mint tea and watermelon spears and asked if I noticed his “plastic parts,” pulling up his white linen shirt just enough to reveal tubes that ran below his waistline, the result of a recent health scare. As we sat to chat, he noted, “I’m surprised at how much physical energy it takes to play the trumpet.”

You were born and raised in Memphis, which musically has renown for being both segregated yet a mixing pot for black and white musicians, as in the case of Stax Records. Can you talk about the influences of the city on you?
I grew up in segregation era, and my parents had this guy, Henry Barnes, who used to come around and take my sibling and me to school. Of course, I knew there was something wrong about his being a second-class citizen. One night, I went out to this incredible juke joint that was made of nailed-together R.C. Cola and Moonpie signs, and it was one of the most memorable experiences for me. It was such a powerful experience. I’ve never quite gotten that out of my mind. In the end, I feel really lucky having been born in the South, because it’s kind of a powerful cultural crossroads. There’s this really remarkable atmosphere to Memphis that I feel has never left me in terms of what I like.

You went to college in New York state?
Yeah, Eastman College of Music, University of Rochester. I was in with a bunch of radicals who were into serialism, Webern, and all that sort of thing. [Future Miles Davis bassist and A Tribe Called Quest collaborator] Ron Carter was in my class, but we were still on different sides of the spectrum there.

While you were at Rochester, you studied with Terry Riley and were part of the ensemble that recorded In C. Did it feel like an important piece at the time?
Yeah, yeah. It was kind of a magic trick, you know? You pulled out this one-page score with 32 or 50 little musical elements on it or something. You could do a malleable performance, and you could change your instrumentation and all that, and it could go on for an hour. So we were zoning out. Of course drugs were part of the deal. There was no question about that — no one should ever leave that out of the history of minimalism, especially because of the fact that’s the roots of electronica now, right? That’s why I’m on Warp. And on Sunday, I’m going to Detroit to work with Carl Craig and Moritz von Oswald. 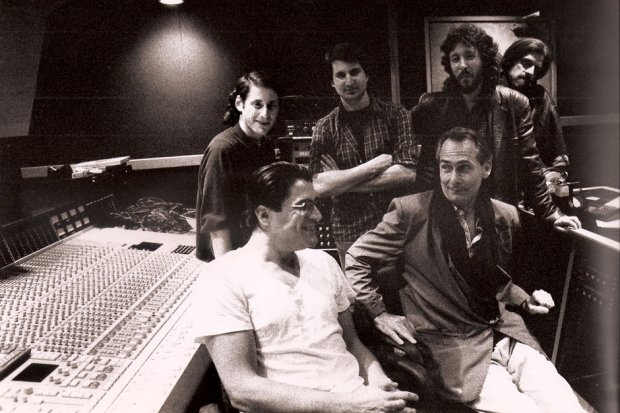 You released your first record, Vernal Equinox, in 1978, about five years after Miles Davis released On the Corner. Was he the catalyst for your own sound?
I was still the white boy on the other side of the tracks in Memphis. And I was around all that African-American energy, and I could only sigh at wanting to be involved in it, because I was on the outside. But actually, it was all about sex. I met a beautiful girl, who’s still in my life, who is a wonderful mixture — black, white, and Carolina Indian. I was married then to the pianist and this girl was taking care of our dogs and… so I just fell into that. And I realized: “Jeez, this is what it’s all about. This is where I’ve been; this is where I want to be.” And I did not want to grow up and be walking around in a tweed jacket on a university campus someplace.

It was a physical relationship?
Very, very, very physical. Absolutely. That was the message. The message for me was that this is religion, too. It’s not all about closing your eyes and tuning out to a drone someplace. Sex was a powerful experience. This was “The South” of you speaking, below the belt, so to speak. And to not have that element in the music would be Philip Glass-ish. [Laughs] Like the kind of idiot I was at that time in my life, I tried to make it work for the three of us, actually. But it didn’t last long.

So Vernal Equinox is about the physical and sexual, your Anglo upbringing meeting this more exotic cultural mentality?
That’s where my notion of “Fourth World” came to be, the blending of elements of the North and the South, geographically and physically.

Since this was the late 70s in New York City, were you into disco at the time?
Well, yeah we would go out at night, dance, do drugs and stuff like that with my new girlfriend. I liked Chic and Nile Rodgers’ stuff. Around that time, Brian Eno met me at the Kitchen. He was working with David Byrne on Remain in Light at that point, so we hung out a lot, and I introduced them to a lot of things, African field recordings and pygmy music, basically. I did overdubs for that record and then this proposal came to me, like, “Let’s make a record together,” one day.

You were supposed to record with them on My Life in the Bush of Ghosts?
I got this cassette from Byrne and Eno and I wrote back, “This is not what I was thinking of.” That was the end of that. Basically it was a big power play, and I didn’t go crazy about it because, first of all, it was toxic — the situation was so toxic, and the very idea they were doing things that they had learned from me, I didn’t even want to hear it. I have not listened to the whole record ever. It’s just become unbearable to think that I’d let that go by, and be where I am now. It’s a major sort of thing to wrap my mind around that I let it happen, and that they let it happen, right? But I mean, I always got along with Brian extremely well. I’m the godfather to his daughter, you know? It’s been a family situation in a way for a long, long time.

You were also an early adapter of hip-hop in the ’80s. What struck you about that?
I liked the rawness of it. What was appealing to me in that it was kind of a spontaneous combustion, the same way that Pygmies would wake up and imitate bird calls and do rhythm on rocks and stones, whatever was around them, or drums from neighboring tribes or that kind of thing. Only here it was the turntable and appropriating — I used the word badly — but collaging their sound environment into this dynamic.

Your records reference Malaysia, Burma, India all these other countries. Did you travel much?
Only in my head.

That’s very Rousseau-like, traveling only in your imagination.
I did have Asian girlfriends and I did have a Malaysian girlfriend, but I just loved the culture. I just loved anything that glorified that “South” thing and reveled in that and came up with something, which was unique and based upon their place. Whatever that particular environment created in their musical inspiration, it’s like an element that cannot be broken apart.

How important were these women for your music?
Very. I definitely know what’s going on below the belt. And I give — it’s my duty, given this idea, to give full expression to that on an equal level with the brainy stuff that’s sending us to Mars, or actually superior, because one has to do with the present. Abstraction, the scale of North and South, where North is abstract and South is sensual or something like that, then it’s always the valuable thing is the thing that exalts the southern part, because that’s what surrounds us. I came from the opposite, from a repressive Anglo-Saxon upbringing. I used to say things like, “I challenge Philip Glass to a dance-off.” Where does the body come into that sort of music?

On the new reissue of City: Works of Fiction, there’s a disc of remixes from new producers like patten and Hieroglyphic Being. Do you like your work getting remixed?
Matthew Jones at Warp has been a terrific guide, shepherd, through all this, because I’ve been pushing him, “OK give me the younger side of this. Where did this come from? Am I supposed to be listening to this while I’m on acid, or am I supposed to be listening to it from what point of view?” I’m asking him to be a seeing-eye dog for me for the young British electronic set.

Collaborating with Carl Craig, now I see where Carl is coming from. I can see what he was doing ’cause I can hear me in what he was doing back then. It’s very physical and sensual. And it’s heady. It’s trippy, right? I feel that I’ve got this little wind in my sails now because of the fact that people have been educated by psychotropics and sonically educated, in a way. They’re listening to textures and things differently — they’re not listening for choruses and verses and shout-outs any more.