How Explosions in the Sky and Eluvium Became Inventions 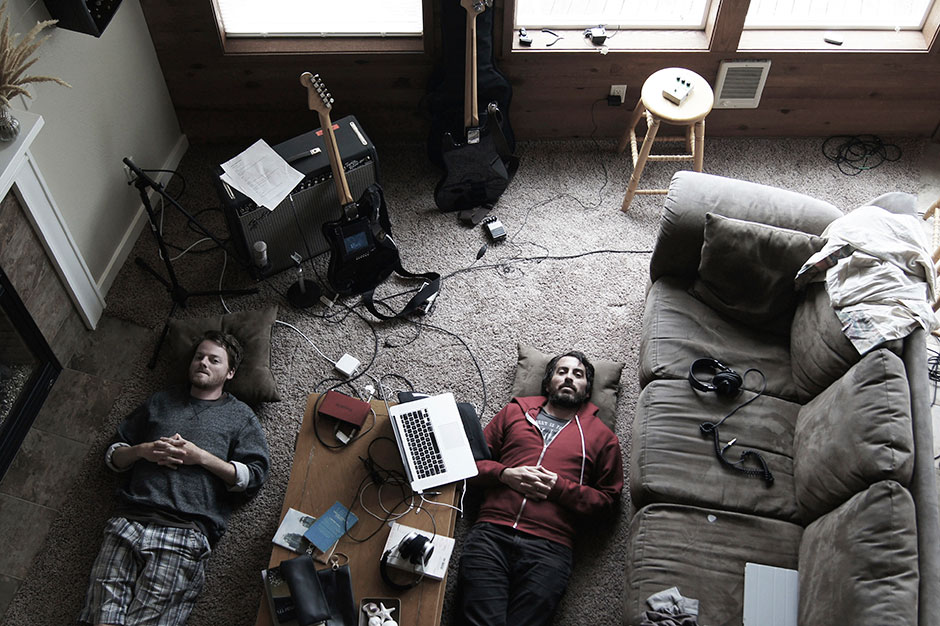 Since 1999, guitarist Mark Smith has been beholden to his post-rock outfit, Explosions in the Sky, applying post-Spiderland dynamics to cinematic grandeur worthy of a three-hour Kurosawa samurai film. Soon after their 2001 breakout album, Those Who Tell the Truth Shall Die, Those Who Tell the Truth Shall Live Forever, the band’s six-string sturm und drang could be found soundtracking everything from the BBC to CSI, from The Diving Bell and the Butterfly to Friday Night Lights. Meanwhile, fellow Temporary Residence resident Matthew Cooper has used his Eluvium moniker, active since 2003, to meld modern electronic-music biorhythms with post-Eno ambient drifts.

In over a decade, Smith has never once ventured beyond the confines of his band, while Cooper has never collaborated with others in the studio. Come April 1, that will all change, as Smith and Cooper release their first duo album, Inventions, staking a middle ground between their two respective projects. SPIN spoke to the two about what it was like to finally connect after so many years.

When musicians discuss their relationships with their band, the metaphor that most often comes up is girlfriends or a marriage. After over a decade with Explosions in the Sky, how would you designate Inventions? A fling? Affair? Or —since Matthew is on the same label — a sister-wife?
Mark Smith: The best I can think of is to say Explosions is like my church and all that it entails: brotherhood and community and trying to find peace in the soul and trying to make sense of the world, etc. — I say this as a person who is not religious. And Inventions is the cult I find myself secretly drawn to.

Matthew, what was it like for you to suddenly open up the creative process to outside collaboration?
Matthew Cooper: I have always been a major control freak when it comes to music, so I don’t think I could do something like this with just anyone. I’m quite used to creating a sketch, or putting down some form of an idea for a song, and mentally being able to hear where I expect it to go or what I expect the final outcome to be. With Inventions, I had to learn to let go of that quite quickly. I remember early in our demo process, I sent him a ten-minute piece of music, and it came back to me as a one-minute piece of music that still utilized everything I had done. I think that was when I first grew a big smile on my face and thought, “Okay, so this is what being in Inventions is going to be like.”

Were you mutual fans of one another’s work?
Matthew: I was working at a record shop when my co-worker — now my wife — received EITS’ debut, Those Who Tell the Truth, as a promo. The stereo was at the back of the store, and when it first kicked in, we had to run to the back to turn the volume down. It became my favorite record that night and stayed that way for a long time.

Mark: My only regret in being in a band with Matthew and becoming great friends with him is that I now sometimes feel strange when someone comes to my house and I’m listening to Eluvium. Which is a shame, because he is one of my favorite musicians in the world, and I listen to Eluvium kind of a lot: “Under the Water It Glowed,” “Unknown Variation,” and “Don’t Get Any Closer.”

What made you two come together as Inventions?
Mark: Matthew came out on tour with Explosions for a number of tours and rode with us in our van. I would always end up doing the night drives, and he would stay up and keep me company, and we’d drive and smoke and listen to Pavement and Silver Jews and talk while everyone else was asleep. We are pretty similarly minded people, and we became friends, and we’ve been friends ever since. I’m still pretty stunned by how quickly the album came together. It just led to a sense of discovery and surprise — every time I’d get an email from Matthew with an attachment, I couldn’t wait to hear what new, weird creation awaited me.

What did you learn from the other? And perhaps along similar lines, what new music did you learn to appreciate via the other person?
Mark: I’m a big fan of how Matthew’s brain works. Conceptually, technically, emotionally. And I was fortunate to see it work every day. Just in raw musical terms, I think we both felt an opening up of what we can do musically, new ways of expression. There was a lot of trust and encouragement and experimentation and evolution. As far as other music goes, I know this sounds weird and wrong, but I have never been a fan of piano music in general. It just always felt limited to me in some way. Getting to see what Matthew does has led me to disown that sentiment completely and find a lot to love, from Nils Frahm and Glenn Gould and Dustin O’Halloran and others.

Matthew: I think my interest in Aphex Twin was brought on by Mark… He might be responsible for my interest in Burial as well. I think that both of us are similar on so many levels, as he stated earlier, but we also have entirely different ways of creating things or coming to something, and he will do things sometimes and send me the work files for it, and I am just befuddled and confused and intrigued by what is going on with them, which has really gotten me to expand and get out of my comfort zone with songwriting and production ideas. There is nothing like the feeling when you decide to “try something,” and you have no idea whether or not it will produce interesting results, and you turn to the other person, and they say, “That is fucking dope.”

Andy Beta
Tags: Eluvium, Explosions in the Sky, In The Studio, Inventions