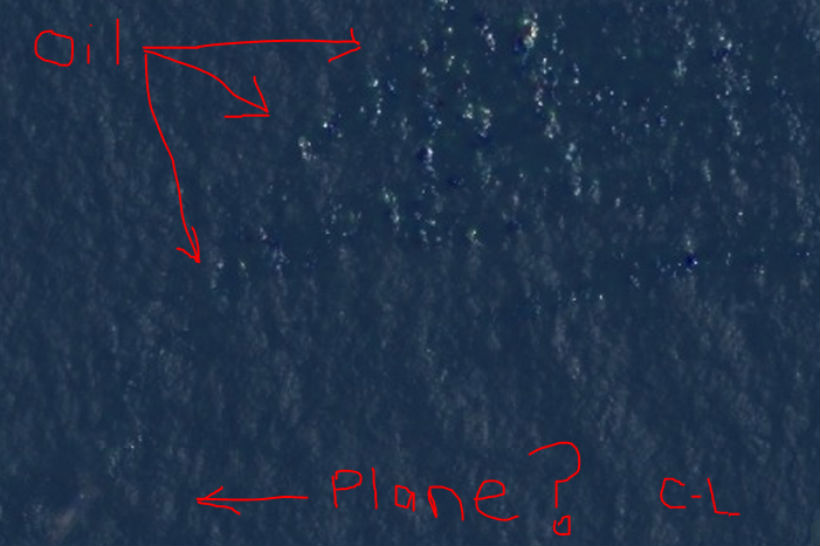 The mystery of the missing Malaysia Airlines Flight 370 has led to an array of conspiracy theories and amateur sleuths trying to figure out just what happened to the vanished plane. The website Tomnod has invited people to peruse satellite images in the search for the aircraft, and Courtney Love is now the most notable among the at-home detectives.

Yesterday, she posted the above image on Facebook with the following message: “I’m no expert but up close this does look like a plane and an oil slick … prayers go out to the families #MH370 and its like a mile away Pulau Perak, where they ‘last’ tracked it 5°39’08.5″N 98°50’38.0″E but what do I know?”

According to the Wall Street Journal’s Market Watch, Tomnod already debunked Love’s theory, noting, “sometimes our eyes see what we want them to see.”

“Yeah, I went to the satellite site and just uploaded tons and tons of pictures,” Love said in an interview with New York magazine’s Daily Intelligencer. “I really doubt aliens took it. It’s got to be somewhere. I’m a little obsessive.”

“I saw an article asked people to help search on Tomnod.com so I decided to give it a shot,” she added. “I figured a plane would still be leaking some fuel so I searched for signs of an oil slick. I found one and there appeared to be an object nearby. I don’t know if it is the plane or not, but I figured I’d do my part and bring some awareness to the site, for the sake of all the families involved. I hope they find the plane, I pray they’re still alive, it’s sad and my heart goes out to all those involved. It’s the least I can do.”

At the very least, let’s hope this puts Love in the running for a role on the next season of True Detective.