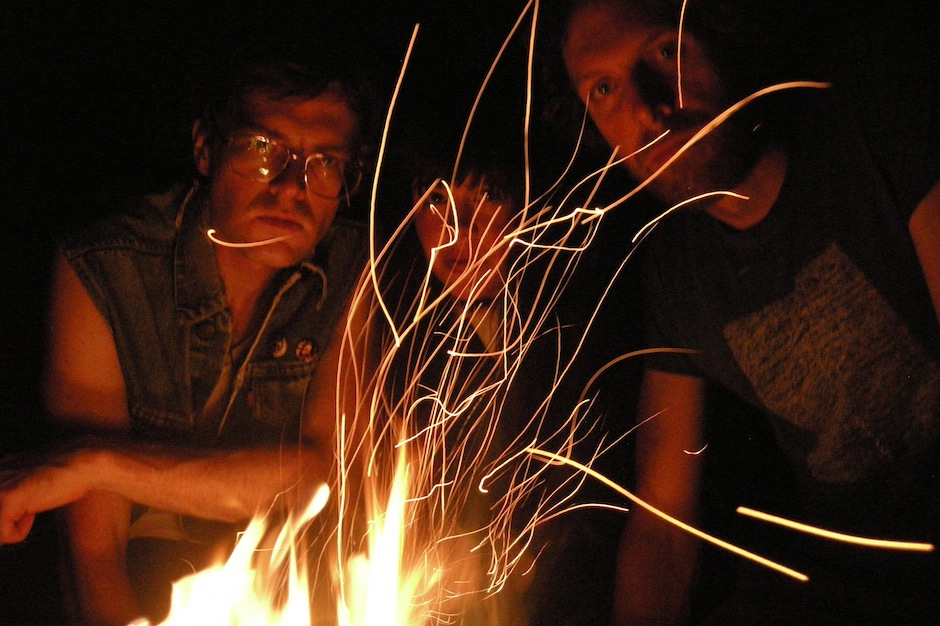 “Nobody would make art if they were sensible, logical, or responsible,” Magik Markers’ Elisa Ambrogio says about the creation of the noisy experimental-rock group’s latest LP. “That’s why we called the album Surrender to the Fantasy. I think when we were making the album, I even wrote down that we have to surrender to the fantasy.”

“Fast-forward four years and we actually get it done,” her bandmate Pete Nolan agrees drolly.

“There was way too much surrendering to the reality,” replies Ambrogio.

It’s not the only excuse the Magik Markers have for the amount of time it took the trio — multi-instrumentalists Ambrogio, Nolan, and John Shaw — to create the follow-up to their last LP, 2009’s Balf Quarry. Prior to this lengthy recording break, the group had put out about 40 releases — LPs, CD-Rs, 7-inches — in a seven-year period beginning in 2002. “We have been spread out,” says Nolan. “I’ve been in New York. I started a family and John started a family. So we could get together and record stuff less frequently than we’d been doing it when we were feisty 20-year-olds.”

Despite the holdups, the group managed to make nine collages of psychedelic whispers, echoes, and clanging guitars. Nolan says the theory behind the album was to return to the sound of jamming in a basement and using instruments like tape machines and synthesizers in unusual ways. They tried different versions of songs and even jammed out extended versions, some of which are available on the USB-only release of the album. And while they recorded only some of the songs at Ambrogio’s father’s basement (and a few at J Mascis’ pad), they channeled a sense of freedom that makes the record appealing. Unfortunately, according to Ambrogio, that freedom got the better of them.

“I remember saying, ‘We need to get this done,'” she says. “‘Let’s be business-like about jamming and get our head in the game in a serious and efficient manner.’ Then we realized we needed the opposite of that. With Magik Markers, I feel like we’re at our best when everybody’s consciousness is sort of tapped into something that’s impossible.”

Read about how Magik Markers tapped into the impossible and stream the entire album below.

:audio=0:119043:song:Crebs:
Elisa Ambrogio: When I wrote the lyrics for this song, I had just read a really great story about the mating cycle of the Maryland blue crab. It’s about how one of the ways that the woman crab becomes pregnant is there’s all these glass bead bubbles of the man’s semen floating in the ocean and she’s sort of swimming in the ocean in these glass beads. They showed a picture of it, and it was really beautiful. When spring is coming, they help each other bury each other in the banks of the river. It seemed like a nice story and it inspired the song.

Pete Nolan: We recorded the song after I had moved up into this house and I figured we would have a practice space in the attic. I didn’t realize it was directly above my daughter’s bedroom and she was 3 years old at the time. That was the one and only time we played up there and it was really hot and miserable.

Ambrogio: I really hated it. It was one of the last confirmed songs to be on the record. I think after we cut some of my vocals out, I liked it a lot better.

:audio=0:119045:song:Acts of Desperation:
Ambrogio: I guess it’s about a bunch of stuff. I started reading a W.C. Fields biography. When he was about to die, he loved to sit in his bedroom and his life partner would take the garden hose and spray it on the roof of his bedroom so it was rain like in England, where he was from. He lived in Beverly Hills so it was really beautiful and sunny all the time. There was something he said towards the end of his life that it wasn’t an act of desperation, but he said he’d been made a fool of. I liked the vulnerability.

:audio=0:119046:song:Bonfire:
Ambrogio: Almost all of my songs have a Revenge of the Nerds component. This one does more than most. When I was in high school, I was straight-edge, and I thought people who went to bonfire parties were cheesy and lame, like, “I was so drunk in the woods and Chad was there!” So maybe I had a weird nostalgia for something I never experienced when I wrote this song. I was really sick for a while before this got recorded, so I was writing all these teen-fantasy type of songs and poetry. It was just this sort of unhinged, fuck-it-all feeling that was the opposite of feeling sick or scared.

Nolan: I’ve actually got a whole awesome bank of memories of being at awesome bonfire parties out in the woods in Michigan. Someone has their car doors open, and it’s always playing Black Sabbath. It was pretty fun and always crazy. We were just wild teenagers, I guess.

Ambrogio: I think the first time we played it, John just looked really happy, like his eyebrows went up and stuff.

John Shaw: Yeah, I think I was putting myself into this party, and we were in your dad’s basement, so I felt like a teenager again.

:audio=0:119047:song:Mirrorless:
Nolan: The original instrumentation and the basic track was Elisa singing, John was playing beer bottles, and I was playing guitar as this folky kind of thing I overdubbed in my apartment in Greenpoint.

Ambrogio: The word “mirrorless” came from when I was in Istanbul four years ago. Our friend lived there. We were in a bar and police came into the bar and cleared it out. We were standing out on the streets. We didn’t have our passports with us, and they were going to detain us. Someone we were with had hash in his cigarette pouch and he was freaking out. Everyone was really worried. So everyone from Istanbul was so frustrated and upset, like, “These are our guests.” So after the cops left, they kept saying this word in Turkish over and over again. I was like, “What does that mean?” They said, “There wasn’t an English word. It was like the cops couldn’t see themselves — they are mirrorless. They can’t see what they look like to other people.”

:audio=0:119048:song:American Sphinx Face:
Ambrogio: The music is all improvised on this song. When I moved out here, we were getting ready to record and J Mascis said, “Oh yeah, you can record in my attic.” And he really has a beautiful studio setup there. So we had access to the best possible guitar tones in the world. You couldn’t make a better guitar tone than in that attic.

Nolan: When I first met Elisa, and I’m not saying this to embarrass you, but she was only 21 and I think we met in Budapest, traveling around. And I think you may have lied about everything you told me about yourself. But the one true thing you said then, and I still believe now, is that you’re going to write the Great American Novel. I think this is a step in the right direction.

Ambrogio: Not everyone can take someone saying, “Everything I told you was a lie,” as a compliment, but I can. I didn’t know I was going to know you for the next 20 years, Pete.

:audio=0:119049:song:Young:
Nolan: That song features a Mellotron, which is something J Mascis had in his attic. When I found that out, I was like, “We are going to use the shit out of that.” You do not see those every day. I guess they manufacture those in Connecticut, which is how he found one. I think he said he got it at a tag sale for not very much money, but man, it sounds good.

Ambrogio: We have an electric version of the song, too. The first time we played it was in the basement and it was electric with full-on drums, and this was just going to be a version to see how it went when we did it this way.

Shaw: We had risen from the basement to the attic.

Nolan: Yeah, the other version will probably come out later. It’s a little more “shitgaze” or whatever they are calling it these days.

:audio=0:119055:song:Empire Building:
Nolan: This is a “tape beat song.” We would loop a tape beat of a bass drum, then we’d have this loop playing and we would improvise over it. That song goes back to the idea about it being a basement jam. The extended version of the song is killer. We’re putting it out on the USB.

Ambrogio: The reason we’re doing the USB is because I figured in two or three years these USB sticks will be obsolete. So we should do it now.

:audio=0:119050:song:Screams of Birds and Girls:
Ambrogio: I guess the lyrics are about when I was a little kid. The first line is, “Kids dream of next” and the idea of when a kid is asleep, they sleep with their mouth wide open — it’s like a circle. It’s kind of an expression of awe, and the moon at night is a circle. So it’s this idea of running through the woods when you’re a little kid and kind of seeing that from above, screaming where it’s kind of fun and kind of scary. It’s the time before adolescence, growing up in the New England woods with crows. It’s like the celestial end to childhood or something. I genuinely mean it as joyful.

Nolan: I think this song fits in with our whole M.O. of the record we did in Elisa’s dad’s basement. When we made it, we had a few beers and I think we were singing through the same microphone.

Ambrogio: And he didn’t know any of the words.