There were a few moments Sunday night at the Bowery Ballroom that the seven-piece wailing pastiche-funk 2013 incarnation of the Plastic Ono Band threatened to overpower Yoko Ono. But not many. Whenever the double guitars and twin keyboards and programmed and live drums and throbbing upper-register bass-lines and trumpet seemed about ready to swallow the center, suddenly, there was Yoko. Ululating, shrieking, honking, squeaking, whoaing, yelping, laughing, sloganeering, singing, and cutting through it all.

Marking the release of the new guest-studded Take Me To The Land of Hell, Ono — playing her only show of 2013 — was at once both commanding and sweet, beautifully cosmic and unflinchingly void-staring. During her hour-long (and thankfully not guest-studded) set, she lobbed far-out hippie love-bombs one tune (“It’s just money! You don’t have to work anymore!”) and unfurled harrowing half-monologues the next. “You stoned me, you burned me, you drowned me,” she sang on “Rising,” her voice making its tender limitations known. And when she wasn’t vocalizing, speaking, giggling, or dancing slyly, there was a tiny bit of time leftover to note that, in fact, there was an 80-year old woman up on stage doing all of it.

And not just any 80-year old woman, but one who lived through World War II in Japan, was a catalyst in both the American and Japanese avant-garde undergrounds, helped kickstart the Fluxists, founded one of the first DIY performance spaces in Manhattan, painted YES on a ceiling in very tiny print, etc., etc., all before meeting John Lennon. Paul McCartney may’ve chilled a few times with Stockhausen, but Yoko was the coolest Beatle.

Leading the Plastic people’s charge was 37-year old Sean Ono Lennon, very much (it has to be said) resembling his pa, circa the strollin’-across-an-LP-cover-in-a-white-suit period. Mother and son sang together on “There’s No Goodbye Between Us,” an excellent abyss number from Take Me To The Land of Hell with an unabashedly sweet melody perhaps made for a younger voice but written (and delivered beautifully) by Ono. 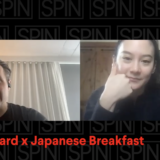 Lennon the Younger jumped, shredded, cued changes, and played bass as needed. The big band — buttressed by super-guitarist Nels Cline and Cibo Matto synthesist Yuka Honda — specialized in supple utopian grooves, locking in with a rubbery neon crunch that didn’t get nearly enough room to fly. One of the set’s few disappointments was a version of the 1971 in-the-pocket yowl-opus “Mindtrain” that seemed tailor-made for Cline’s elegiac and cloud-like filigrees but, trimmed to about a third of its original 17-minute length, seemed to lose something in the restitching.

Even so, the band remained thrilling for the duration, if only for the promise that — at any moment at all — one of their lead singer’s phrases might spin out and open up into something unimaginable. It was a promise kept again and again, Ono’s vocals bending from language to pure emotional horn tones. And also sometimes bleating. But that’s part of the promise, too. Though clearly not up for extended vocal acrobatics, Ono only received a dash of reverb, and maybe didn’t even need that, sometimes flowing with the band, sometimes pushing against them, like an impish surrealist version of the James Brown cape routine.

For the latter two encores, the band brought out Earl Slick, the circa-’70s-and-’80s guitarist for Lennon and David Bowie. They did “It’s Been Very Hard” (file under: the Yoko Variations, blues), and then Ono introduced 1971’s “Don’t Worry Kyoko (Mummy’s Only Looking For Her Hand In the Snow),” written about her then-kidnapped daughter. “The original guitars were by Eric Clapton and my dad,” Sean pointed out, “which is pretty dope.” Maybe so, but the original vocals were by Yoko Ono. By some measures, that’s far, far cooler.

Setlist: “Moonbeams”
“Cheshire Cat”
“Rising”
“Waiting For the D Train”
“Between My Head & the Sky”
“Will I”
“Moving Mountains”
“There’s No Goodbye Between Us”
“Walking On Thin Ice”
“Mindtrain”

earl slick, sean lennon, We Were There, Yoko Ono