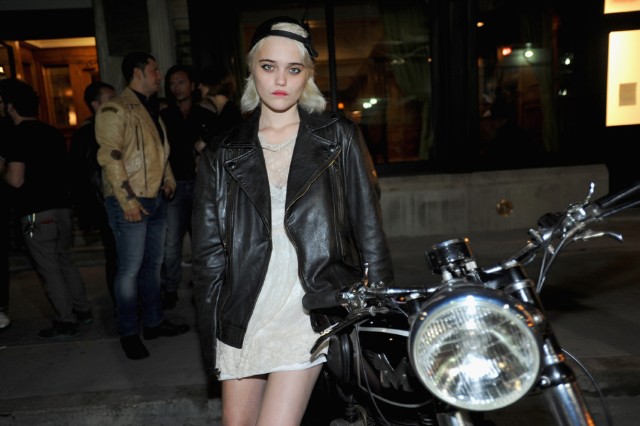 Just over a week ago pop starlet Sky Ferreira and her boyfriend, DIIV’s Zachary Cole Smith, were arrested while driving to the Basilica SoundScape festival in upstate New York. The charges were certainly unflattering. His: holding 42 decks (up to 15 grams per) of heroin, and driving with a stolen license plate. Hers: possession of ecstasy, and resisting arrest. Until now, the couple’s only attempt to address the incident publicly came via the DIIV Twitter account:

what you’re reading is a police blotter, not the outcome of a court case. these cops wanted to fuck us, and they did. sky did nothing wrong.

Now, Ferreira has spoken out in an interview with Billboard, again emphasizing that the Saugerties police, who pulled Smith over for what they called “several vehicle and traffic infractions” — were out to get them. She apologizes for potentially, unintentionally, promoting drug use but maintains that she is not an addict. Furthermore, she calls out friends, fans, and hangers-on who’ve used the opportunity to make negative statements of their own, instead of encouraging help or healing.

Some highlights from Ferreira’s Billboard interview below:

“I legally can’t say much about what happened, but it’s not what it all seems. I kind of got fucked with. And it’s annoying because I wasn’t charged with his heroin. It says it. The public records are out there… If I was even anywhere near that, they would’ve charged me because they had no problem charging me with other shit. They were out to kind of like fuck with us. I’m scared to say more than that because I don’t want them to arrest us anymore… No one actually knows what happened besides Cole and I and the Saugerties police.”

“It’s hard that every day now I have people calling me a heroin addict or making fun of me and saying that I’m gonna die of AIDS from needles and shit like that. The one thing I think that bothers me the most is people being self-righteous about it and not knowing what they’re talking about. Read what it says. People are being really hypocritical about it and just using it as a way to mock us. I don’t like the way people are treating me and Cole. If I thought someone had a problem, I would help them, I would want to get them help.”

“I know for a fact I’m not a drug addict. That’s all I really have to say about it. I know I’m not a drug addict. I’m sorry if it hurt anyone and I’m not trying to promote drugs and it’s not like an image thing whatsoever Do you think I want people thinking I’m a heroin addict? No… I’ve learned a lot from the experience and I feel stronger from it. I’m sorry if it seems like I’m trying to promote drug use or something because I’m not. But I’m a human being and people get involved in bad situations some times. That’s really all I can say.”