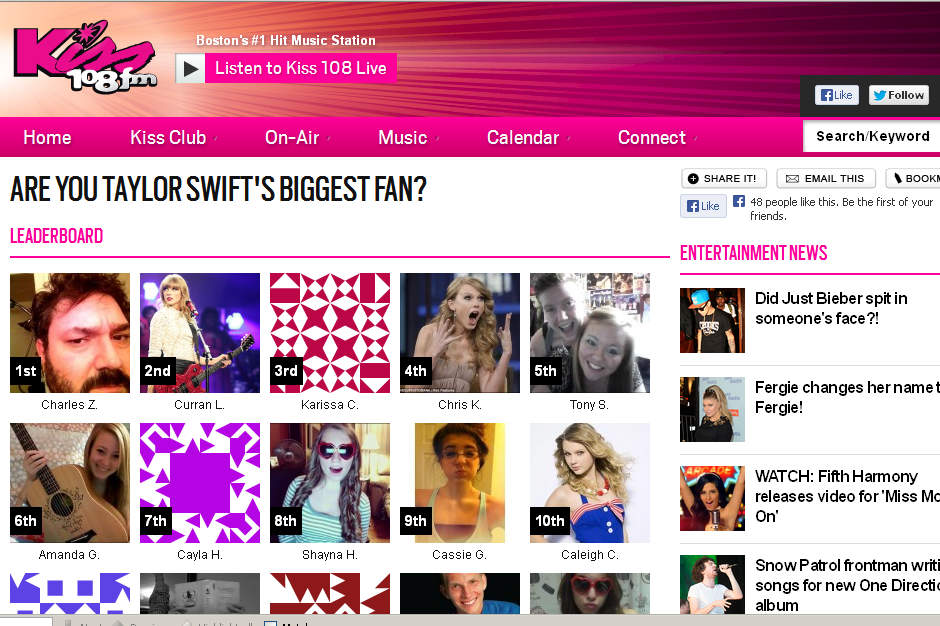 Taylor Swift and 4chan never, ever go well together. Once again, the notorious website is taking aim at the country star, this time rigging a radio contest so a 39-year-old “fat old guy creep” can meet her — and sniff her hair.

Boston radio station Kiss 108 put on the “Are You Taylor Swift’s Biggest Fan?” social-network contest, with the winner getting to meet Swift and take a photo with her at Massachusetts’ Gilette Stadium. Currently, the projected winner is a husky fellow named Charles thanks to voting spam bots, the support of 4chan readers, and people on Twitter sharing the seemingly innocuous hashtag #VoteCharles.

The original 4chan post came from someone claiming to be a friend of Charles, who pleaded for readers to give Charles “a chance to make a complete ass of himself by blatantly just sniffing her hair with cameras rolling.” Whoever created Charles’ profile entered the contest with this message: “I’m a 39 year old man and I love Taylor so much and don’t care that both adults and children mock me for it. But I feel 22 if that helps.”

The contest ends on Sunday night at 11:59 p.m. EST, but Charles could be disqualified before then, as the rules state the station can disqualify anyone who receives “votes generated by a robotic, programmed, script, macro, other automated means or other source.” Tough luck, Charles.

Last year, 4chan hacked another contest involving Swift, that time voting to send the princess of pitchy to perform at the Horace Mann School for the Deaf and Hard of Hearing. The entry was disqualified for using similar vote-boosting cheats, though Swift and other sponsors donated tens of thousands of dollars to the school. Maybe she can just donate a lock of hair to the creepy fat guy?