Somewhereinamerica, an Android is still virus-infected 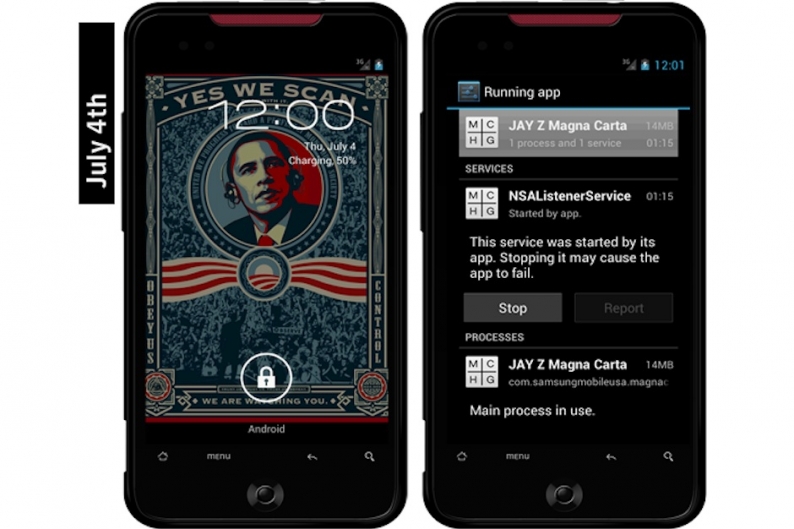 Watch the Phone. No, really, watch your phones. Computer security firm McAfee has found a hacked, cloned version of Jay-Z’s Magna Carta Holy Grail app, and this “malware” version sends information about users’ devices to a server somewhere every time the phone restarts. (We spotted this via the BBC, but unfortunately we don’t mean the “stupid, fun, and stupid fun” MCHG track of that name.)

The cloned version of the app was available on pirated sites, according to McAfee; Samsung Galaxy users who grabbed the official app via Google Play should be unaffected. Aside from being a reminder that your paranoid older friends who won’t download content illegitimately because of computer viruses may have a point, the cloned app also constitutes one hell of a political protest: On July 4, infected devices would have their wallpaper replaced with an image based on Shepard Fairey’s famous Barack Obama “Hope” poster. The accompanying text, “YES WE CAN,” seems to refer to recent disclosures about the U.S. government’s data-tracking programs.

Otherwise, this counterfeit MCHG app is said to work just the same as the original. Still, that whole thing about it sending data to a server each time the phone is restarted is a bit worrying. McAfee Mobile Security analyst Irfan Asrar writes, “The image and the service name NSAListener suggest a hacktivist agenda, but we haven’t ruled out the possibility that additional malware may target financial transactions or other data.” The new Jean Michel? The new Picasso? Maybe the new National Security Agency — or at least, the new unelected hacker with a vaguely radical political agenda. M.I.A. feels us.