'Yeezus' cut is the strangest yet, but the much-talked-about song also feels strangely unassured 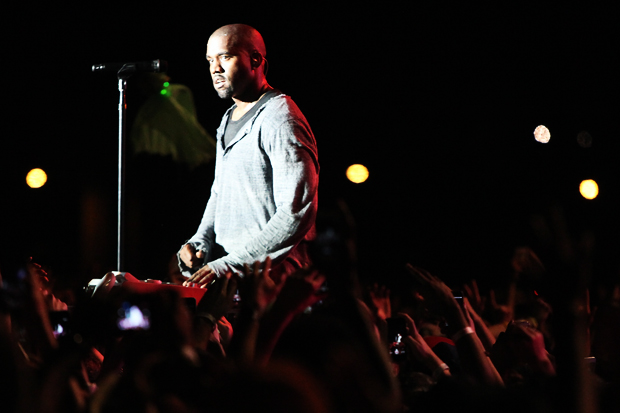 As the release date of Kanye West’s next album Yeezus nears, rap radio has taken to resurrecting recent Kanye West singles. My Beautiful Dark Twisted Fantasy’s “Monster” seems to be back in quasi-rotation and Cruel Summer cut “Clique,” which never quite went away, has also returned with a vengeance. No doubt this is a way of feeding the demand for Kanye music until there are proper versions of any of the Yeezus tracks that have popped up in the past month or so. Though it’s also hard to imagine that any of the songs he’s teased so far — the prison-industrial-complex cry “New Slaves,” the noisy rap-rocker “Black Skinhead,” and the few tracks he played at the Governor’s Ball NYC Festival Sunday evening — getting anywhere near the radio anyway. Even as hip-hop dives further and further into Mike Will Made It’s syrup-sloshed, strip-club-in-hell soundtrack (with Juicy J as Virgil and 2 Chainz as Dante), these Yeezus cuts just sound too strange.

This is both what makes them so fascinating and more than little frustrating. Rap works best when it smuggles in the weird sonics and the subversive messages. All of this seems a little too much like Kanye patting himself on the back for making difficult music, because, frankly, these songs are more “difficult” than just plain difficult. The most interesting one so far is “I Am a God.” Thanks to some Vine and iPhone users at Governor’s Ball with steady hands (and the foresight to cover up the phone’s mic just enough to avoid bass blowouts, we’re able to hear something close to a proper version of the song. Pushed along by acid-house techno flickers and full of jagged jump-cuts of noise like a Matthew Herbert composition (the sound of someone breathing heavily, ominous operatic growls) and interrupted by “Frankie Teardrop”-like screams, “I Am a God” is a self-consciously arty soundscape. It also doesn’t quite live up to its swaggering, controversial name. Kanye does compare his clique to the Rat Pack, which is its own kind of blasphemy to plenty of people. And what’s next after taking down Ol’ Blue Eyes a peg? Kanye calling himself the new Pink Floyd?

Mostly, though, “I Am a God” is just the Kanye West single that’s all about how much he is feeling himself. It’s just a loaded way of saying “I am the best.” He tells the crumbs at some French restraurant to shut up and bring him his croissants. He imagines a convo with Jesus about how much dough he’s got (there’s always one of those). The title also feels a bit like Lil B’s I’m Gay (I’m Happy) cop-out. “I Am a God” holds all of the swagger and obnoxiousness necessary to get people talking, but adding that “a” results in the track having none of the ballsiness that would make it a daring pop star pissing people off move. Coupled with a great deal of hype before the song even arrived (“I Am a God” was rumored to be the name of the album; he apparently rapped it for Kim Kardashian at some Metropolitan Museum of Art gala last month), the song just can’t match the speculative blog coverage that preceded it. There’s a distancing effect that hinders excitement when we’re hearing these song by way of Vines and videos projected onto the sides of museums. It doesn’t so much build up anticipation anymore as crowd the song with context (releasing a properly recorded single of one of these tracks might be wise at this point). With “I Am a God,” this year’s trend of stunt-style release tricks and mysterious, publicity-grabbing moves has, perhaps, hit its tipping point.