Santigold to Play Make-Believe on ‘The Office’ 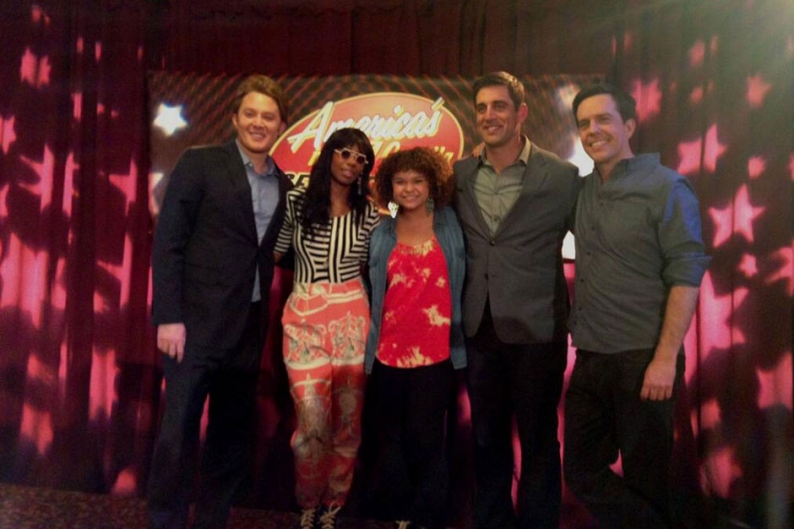 Santigold repped for the ladies on “Girls,” her contribution to the HBO show of the same name, and now the Master of My Make-Believe singer is about to lend her talent to network television. Santi White confirmed on her Twitter Tuesday (May 7) that she will make a cameo appearance on this week’s episode of NBC’s The Office, alongside American Idol runner-up Clay Aiken and NFL quarterback Aaron Rodgers, who will also guest.

The SPIN 50 Best Albums of 2012-honoree also shared the above photo of herself standing with Aiken, Rodgers, and The Office’s Ed Helms. According to the NME, Santigold will play herself and feature in a storyline in which Helms’ character, Andy Bernard, auditions for a fictional talent show called America’s Next Great A Cappella Sensation. We’re big fans of Santi and all, but she’s got her work cut out for her: Helms’ Andy is a well-proven a cappella sensation.

The penultimate hour-long episode, titled “A.A.R.M.,” also includes an audition for the Assistant to the Assistant to the Regional Manager position. “A.A.R.M.” airs tomorrow (May 9) at 9 p.m. EST on NBC. The series ends its nine-season run on May 16. Several guest stars are reported to appear on the finale, including Joan Cusack, Mindy Kaling, B. J. Novak, Ed Begley Jr., and Steve Carell.