Dark Side of the Mat: Surviving Pink Floyd Laser Yoga 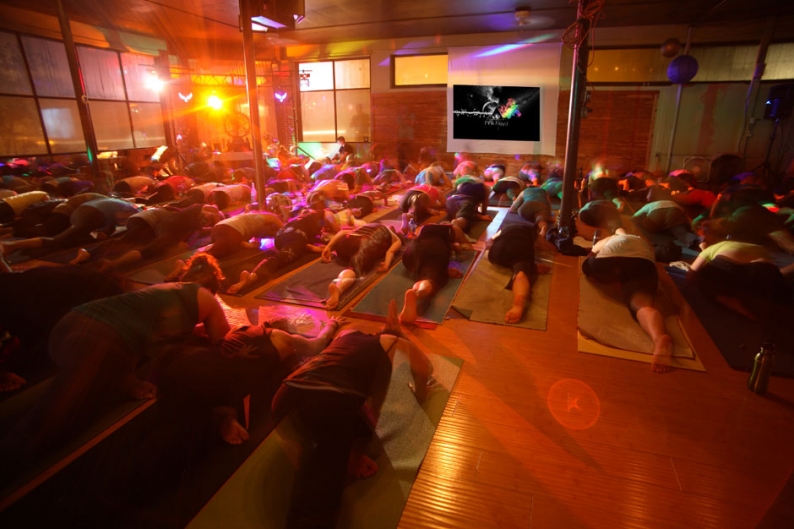 Pink Floyd Laser Yoga is precisely that: yoga set to Pink Floyd with projections and lasers. Portland, Oregon-based instructor Chris Calarco has been teaching it since last year, aiming to “combine alignment-conscious Vinyasa and iconic musicians to deepen your relationship with the universal pulsation of spanda.” Got that? He’s done Madonna, Michael Jackson, and Bob Marley yoga classes as well, but Floyd’s music hits that sweet spot between party vibes and higher consciousness — even his first class, with fellow yoga teacher Todd Vogt, sold out, and the recap on his blog boasted “righteous live mixing” and “going deep.” Also: lasers. So when he and Vogt brought Pink Floyd yoga to Manhattan’s Vida Yoga studio last week, Well and Good NYC recommended “rock[ing] that tie-dye workout tank you’ve been meaning to debut.” (It’s probably notable that Calarco reserved his Phish yoga class for Philadelphia only.)

I don’t love yoga (I prefer my workouts with higher BPMs) but I love raves, lasers, and any kind of immersive “experience,” particularly when said experience is uniquely tethered to understanding music in a new way (see: raves). So I signed up blindly, despite not having done yoga for a good two years, and with a healthy skepticism towards how it would play out. My friends Chiraag and Himanshu recently staged a small art exhibition at the Whitney Museum that included a protest of the $6 billion yoga industry, which they feel is an appropriation and corporate commodification of Hindu spirituality. Himanshu also created an installation that included 65 yoga mats stacked into a corner with the cardboard box they came in, apparently to show the disconnected, mass-produced symbol of what yoga has become in the Western world. I regret not “borrowing” one of those mats after the art show was over, because it turns out I had to pay $2 to rent one for Laser Floyd.

When I arrive, the yoga room is entirely packed — 70 people, Calarco says later — thwarting my plans to post up in the farthest back-corner possible. I find the last possible open spot in the very front directly next to the cubbyholes where everyone stores their bags and jackets. The room is dark and a small disco-sized party-ball is projecting Jello-colored lights on the walls while a projector shows images of Pink Floyd concerts and various, apparently unrelated nature images, like a flock of sheep. A twentysomething white man with a tie-dyed T-shirt and a Portland fashion mullet (via electroclash 2001) stands behind two turntables, queuing up the Floyd, and as everyone’s getting their mats settled, in walk Calarco and Vogt, looking appropriately yoga-hardbody. The latter is wearing a T-shirt that reads “Spiritual Gangster” in Old English lettering. The former is wearing a Phish shirt and a cream-colored crocheted beanie. The dudes start reading us their theses to prep us for what’s to come, which it turns out, is almost identical to the mission statement on Calarco’s website:

Pink Floyd are masters of polarity. They created terrifying and beautiful music that narrates the universal human experience. Similarly, the internal and external practices of yoga requires us to confront our deepest fears while also inspiring us toward our highest creative potential. Exploring one’s entire self means diving into the dark side and celebrating the light of gratitude and love.

They talk about dichotomies like light and dark, “sanity and insanity,” and “The Oneness.” I am lying down on my back and start to giggle uncontrollably, which I know is an asshole move, particularly in a yoga class, but it’s hard for me to take anything seriously because it all feels so stonery. When the teachers ask everyone to sit up and drop an “Ohm,” a depiction of the Hindu god Hanuman flashes on the projector, the laser lights roiling over his face. I think about Himanshu’s yoga-mat installation, and another article he sent me about white men who travel to India seeking spiritual awareness and, instead of finding Eat Pray Love, they end up with Into the Wild. I vow never to travel into the Himalayas alone, and concentrate on my breathing. Chris keeps saying, “Let the music absorb into your pores,” and I’m convinced we’re about to get dosed from the overhead sprinklers, or the Ergot spores of our collective sweat. Would I be mad if Chris dosed us right now? Probably not. I swing my foot into a lunge and rest my elbows on the floor like he tells us, leaning into the organ parts on “Shine on You Crazy Diamond,” stretching hard for the memory of Syd Barrett.

This is where the class becomes a blur, because yoga is generally about constant movement, so I stop laughing and allow myself to get into the zone. I don’t know all the official names for each pose, but the woman next to me is a yoga queen on some Madonna shit, so I take my cues from whatever she’s doing. This makes me feel extremely wack, as a person who is vehemently against biting of any sort, but I remind myself this class is all about open-mindedness and just take the L. I’m cool with Sun Salutations and all the sweeping, balancing poses, but the Vinyasa is basically a slow-mo push-up repeated 500 times and I start to succumb to the early stages of fatigue. At some point, DJ Fashion Mullet drops “Echoes” while we’re in the highly compromising pose that is Downward Scorpion — like Downward Dog, with your hands and feet firmly planted and your ass up in a V, but with one leg lifted up. One of the instructors says, “Now as you lift yourself into Downward Scorpion, pretend your foot is a wave of love. And if that wave of love knocks us over, so be it.”

What is it about Pink Floyd that makes everyone want to vibe into their third eye? Vogt explained how the cover of Dark Side of the Moon is symbolic of this one (or the One) energy filtering in the prism of our consciousness and exploding in our minds in rays of “diversity.” Pink Floyd with lasers has been popular for a good 40 years, when in 1972 a laserist by the name of Ivan Dryer first began showing his custom creations set to rock music. Laser Floyd has been such a rite of passage for teen herbalists that it’s become almost a cliché of American pop culture, represented on television shows like Freaks & Geeks, Seinfeld, and The Simpsons. But as Brian Raftery wrote in SPIN’s September 2005 issue, Laser Floyd (and all laser light shows) have been on the wane since the 1990s, replaced by new types of music and technology. Pink Floyd Laser Yoga is a vaguely nostalgic experience, linking an old form of entertainment to an ancient one for a totally new steez for the trippy rock hippies of yore aging into body wellness and drug-free spirituality.

But then, most of the people in this class are under 35, and if the advanced moves are any indication, this is just a post-groovy path to rock-hard abs on a Friday night. Madonna chick next to me is folding herself into a position that I recognize, loosely, as a basic b-girl freeze. I fold myself into Child’s Pose, which is essentially the fetal position of yoga, and start laughing again, but am also totally pissed-off at the instructors for inflicting this upon me. I text my editor on the low: Caryn, this is torture. She texts back, Hahahha, and I know she’s totally drinking beer and watching the Knicks, the absolute thing I want to be doing. I begin to curse her existence, but then become distracted, because the class is doing the back-down, legs-up yoga pose from Ciara’s “Body Party” video. I totally land it, encouraged by repeating to myself the time-honored mantra Nayvadius Wilburn… Nayvadius Wilburn… Nayvadius Wilburn…

Pink Floyd Laser Yoga is scheduled from 8-10 p.m., and I thought there was no fucking way in hell we’d be doing yoga the entire time. I think about this around 9:45 p.m. when the DJ plays “Time” and the projection switches to Judy Garland and her pals getting opium-dusted in the poppy flowers, the scene in Wizard of Oz that syncs up to this jam off Dark Side of the Moon. These dudes know their shit! Vogt says, “Sometimes the journey… gets weird,” and I totally know what he’s saying, you know?

Now I’m in Corpse Pose listening to “Breathe” with my eyes closed, and a combination of the sweat and vague euphoria of muscle growth is giving me extremely intense high-school weed flashbacks. I no longer resent Calarco and Vogt. You’re supposed to clear your brain, but I’m having a pervasive feeling of being 17, smoking weed in my car in the summer next to a lake and thinking whatever guitar sound was on the stereo was the most beautiful music ever made. (Note: it was definitely not Pink Floyd. Probably the Cure.) I can feel every guitar slide in my toes. I have an acute sense memory of Nag Champa’s cloying-sweet smoke burning my eyes. Can you get a contact high from your memories, or is this simply “The Oneness”?

Chris and Todd tell us to sit up and connect our Jedi fingers to our third eye and resonate. David Gilmour reminds us, “Long you live and high you fly, but only if you ride the tide.” The room sits and makes the “Ohm” sound in all variety of pitches and we’re all feeling very yeeeahhhhh, mannnnn. When the lights come back on, Calarco tells us where we can cop “Spiritual Gangster” merch. Shine on.