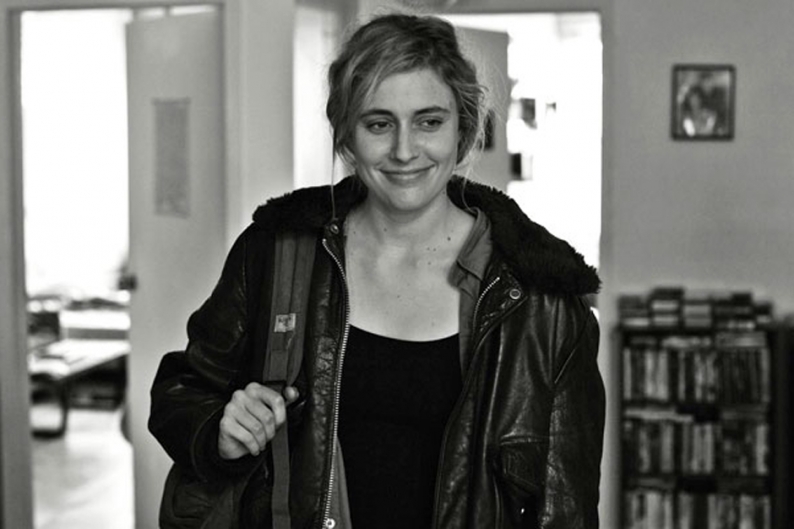 According to Greta Gerwig, Frances Ha — the newly released film she stars in and cowrote with its director (and her boyfriend) Noah Baumbach — has a soundtrack that’s “grand and romantic sounding.” Which in this case apparently means pop-rock titans like Paul McCartney, David Bowie, and T. Rex. The music of her own life is more varied, though just as effervescent. A few days before her film’s May 17 opening, Gerwig, 29, spoke to us about her dad’s Alanis dis and her own admittedly poor taste in karaoke songs.

When you were growing up did your parents object to anything you were listening to?
They were pretty much cool with everything I was listening to. I remember being crazy about Alanis Morissette and playing the Jagged Little Pill cassette tape in the car on the way to junior high a lot. I told my dad I’d read in a magazine that she’d written one of the songs in only ten minutes. He was like, “Sure sounds like it.” He’s full of good dad quotes like that.

Did you listen to anything your parents were into?
I really liked my parents’ record collection because it was full of Beatles, Stones, and the Who. I especially loved the theatricality of the Who. When I was little I always wanted to be in that band. Then I found David Bowie and couldn’t believe no one had told me about this guy dressing up like a spaceman!

What was the last song you listened to today?
Kendrick Lamar’s “Poetic Justice.” I know I’m late to the game on him, but I absolutely love Kendrick Lamar. I was working with Dirty Projectors on a film project and I was asking them about what music they were into at the time, which is always kind of lame to talk to a band about music they like, but I knew they had good taste! So [Dirty Projectors’ singer-guitarist] Amber Coffman told me how great Kendrick was and I ran home and downloaded everything I could find.

Who on the set of Frances Ha had musical taste most similar to your own?
Sam Lisenco, who was the Art Director on Frances Ha, has always been the best at finding music before it becomes a thing. He has such an incredible record collection and he’ll even listen to things he’s never even heard of just to see if there’s a hidden gem. I don’t have patience to go through records like that, so I turn to Sam. I’ve had him DJ many parties for me. I want to hear something different than typical dance party songs but I want songs that still make you want to dance. This is why it’s a must to have a friend well-versed in obscure ’80s dance music.

If you were curating a music festival whom would you put on the bill, living or dead?
My first thing would be figuring out the venue. I don’t like mud and dust and I don’t like standing around too much so that’s basically all music festivals and I’m basically an old man. I say let’s do it in Vermont when it hasn’t rained in a couple of weeks and just have tons of lawn chairs. That would be lovely.

But who would play it?
What everyone else would pick: the Beatles, Rolling Stones, the Smiths, Lou Reed, Bowie.

What’s the name of a mix you listen to a lot?
I have a mix that was made for me in high school and it’s called “Start Sad and Get Happy.” It starts out with R.E.M.’s “Losing My Religion” and ends with Van Morrison’s “Everyone.” It goes from isolation to community. It was made for me on a CD in high school by my friend Matt who I’ve known since I was in first grade. He was my first real boyfriend, too. He made me this amazing mix that I’ve had my whole life that I pull out when I’m feeling sad.

Do you ever make mixes or playlists?
I never make a mix or give one away because I feel like that’s a very vulnerable thing to do. I’m just not great at it either. I’ve been lucky enough to know people who make great mixes. Most of these people in my life have been gentleman.

Do you have a go to karaoke song?
Mine is so embarrassing — it’s “We Built This City” by Starship. I even memorized the radio broadcast sequences that pop up during the song. It’s so incredibly dorky. My friend Kate McKinnon— she’s on SNL and I’ve known her since college — she has a great one. Her karaoke song is Eminem’s “Cleaning Out My Closet” and she knows every word. I’ve seen her do it a couple of times at bars and people can’t believe this sweet little girl can do it without having to look at the screen. The performance gets a reaction that’s a mixture of horror and amazement.

What is your favorite song of all time?
This is going to sound like I’m picking something random, but “Lay My Love” by Brian Eno and John Cale is my favorite song. It’s a song that I want to dance to at a wedding set out in the countryside. If you listen to it you’ll immediately feel like moving, or going for a run.