The club was double its capacity when 242 people died 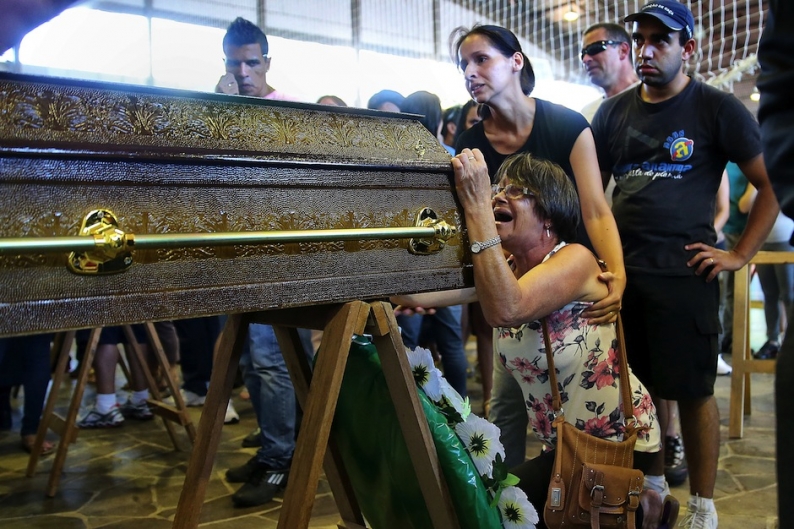 Anger. Disappointment. Those were the emotions on display yesterday from friends and family members of the 242 people who died in a Brazilian nightclub fire earlier this year, CNN reports. At a hearing on Wednesday, judges said the four defendants charged in the case would be granted bail.

The blaze ripped through the Kiss nightclub in the university city of Santa Maria in January, when a band’s pyrotechnics went wrong. Authorities have filed charges of multiple murders and attempted murders against club owners Elissandro Spohr and Mauro Hoffman, singer Marcelo de Jesus dos Santos, and concert producer Luciano Bonilha. Prosecutors say dos Santos’ band cut costs by using outdoor-only pyrotechnics and club owners let the venue become dangerous. (The crowd of 2,000 people at the time of the fire was double the club’s allowed capacity, according to CNN.)

Horror Show: A Close Look at the Decade’s Live-Music Tragedies

The judges agreed yesterday with the defendants’ request to withdraw the arrests on the grounds they were made to keep the community from getting out of hand. The court pointed out, too, that the defendants hadn’t meant to cause deaths. “The court did not see in the defendants elements of cruelty, or absolute disregard for human life that are often found in other murder cases and several crimes,” the judges reportedly said in a statement.

According to CNN, it seems to loved ones of the fire’s victims that the defendants are now getting away with it. “Our hope has gone down the drain,” Adherbal Alves Ferreira, who lost a relative in the tragedy and now heads a group advocating for victims’ loved ones, is quoted as saying. “It’s as if our children were worth nothing.” He predicts Santa Maria will once again be fraught with emotion. It began in the courtroom, where as CNN reports, when the judges revealed their decision, a woman cried out.