15 Albums You Can Hear Now: Deerhunter, Iggy and the Stooges, LL Cool J, the Melvins 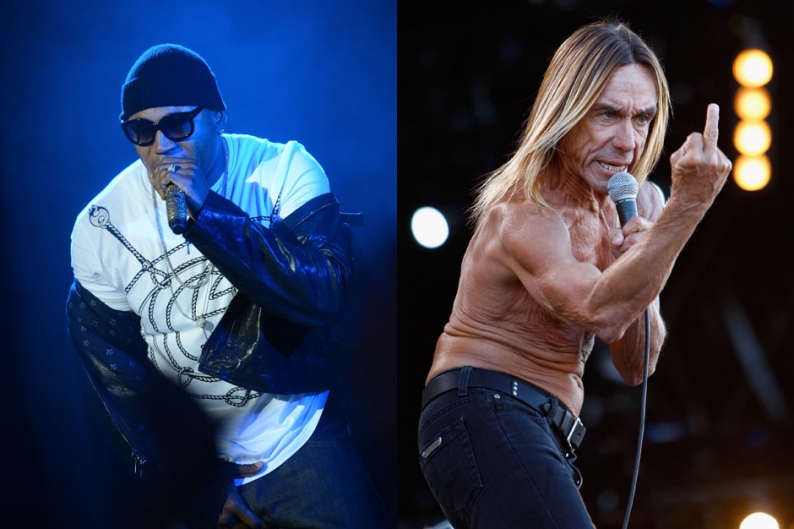 For this week’s roundup of ready-to-stream albums, we’ve collected new full-lengths from Deerhunter, Iggy and the Stooges, !!!, Os Mutantes, the So So Glos, and many more. Fetch a pair of headphones and feast:

1) Deerhunter, Monomania. “The noise-lacerated opening pair may put off fans who jumped on board with Halcyon Digest’s shimmering dream-pop anthems, but the honky tonk-torching ‘Pensacola,’ Queen-invoking ‘Dream Captain,’ and bigwheel confessional ‘Nitebike’ are uniquely appealing in the Deerhunter crew’s extensive catalog.” — SPIN (via NPR)

2) Iggy and the Stooges, Ready to Die. “With humor intact and the guitar loud,Ready to Die — from its rockers to its surprisingly reflective ballads — ought to have [Iggy] Pop, [James] Williamson, original drummer Scott Asheton and Mike Watt (filling in for the late Ron Asheton on bass) feeling awfully proud.” (via NPR)

3) Os Mutantes, Fool Metal Jack. “Plenty of fighting anthems turn up, too, and they’re as feisty as they are tongue-in-cheek. ‘Look Out’ teeters on the edge of cheesiness, but rapidly evolves into a Muppets-on-motorcycles rock-out tune that’s both cuddly and subversive. Os Mutantes’ members have been nostalgic since their youth — precociously so, like kindergarteners having an existential crisis — but the impatience that used to lie beneath their gloomiest songs has been replaced by a sense of calm.” (via NPR)

5) !!!, THR!!!ER. On “One Girl/One Boy,” the album’s third track: “[P]roducer Jim Eno of Spoon recommended backing vocalist Sonia Moore for the song’s house diva role, and she confirmed to the band that she’s the ‘hey hey’ singer from MC Hammer’s ‘2 Legit 2 Quit.’ Her brassy pipes are striking for more than nostalgic reasons, and the sultry party-funk of ‘One Girl/One Boy’ once again underlines !!!’s ability to evolve — and stay reckless — without regurgitating ‘Me and Guiliani Down by the Schoolyard (A True Story)’ or ‘Heart of Hearts’ for the rest of their lives.” — SPIN (via Pitchfork)

6) Coliseum, Sister Faith. “For years, the Louisville trio Coliseum have walked the line between fuzz-blasted riff-metal and clangorous post-hardcore, and their new album… may be their strongest yet. Sister Faith has hooks and speed and punishing math-rock songcraft working for it, and it’s a complete blast.” — Stereogum (via Pitchfork)

7) So So Glos, Blowout. Says drummer Zach Staggers: “The vibe is so apparent in the title, Blowout. We had that name as a loose name for a while. Even as we were starting in the studio we knew that’s what we were going for. It’s like everything is blown out, bricked out, we just wanted it to be aggressive. We just put our faces in people’s faces to get our ideas out. And it’s a party.” (via SPIN)

8) The Melvins, Everybody Loves Sausages. “Over 30 years [the Melvins have] released 21-or-so albums and are constantly exploring the winding alleyways that go far beyond their trademark Beefheartian sludge — free-form noise, dark-ambient drone, hardcore punk, cartoon country, and moody jazz-rock for starters. So it’s only fitting that their… covers album… pairs acts like Throbbing Gristle and Venom with unlikely bedfellows like Queen and Roxy Music. Featuring a similarly incongruous collection of guest appearances (Dead Kennedys’ Jello Biafra, industrial pioneer J.G. Thirwell, Blondie drummer Clem Burke), Everybody Loves Sausages is a bit like a block party for frontman Buzz Osbourne and drummer Dale Crover to slam out the songs they grew up on [with] their best buddies.” (via SPIN)

10) Lucero, Texas & Tennessee EP. “Frontman Ben Nichols’ husky vocals recount vivid stories of long-distance love, starring couples either separated by distance (see ‘Union Pacific Line’) or disinterest (‘I can see the leaving in your eyes,’ Nichols sings on the title track), as patient guitar lines tumble, pianos twinkle, and horns swell and sway along with each narrative.” (via SPIN)

13) YAST, YAST. “[T]he record is a winsome jaunt — a very summery sort of Real Estate meets Woods sound that’s packed with slow strums, big wah solos and mildly high singing. Check out standouts like the boozy ‘Always on My Mind,’ throwback ‘Heart of Steel’ and… the pleadingly romantic ‘Strangelife.’ This’ll be a great record for an early summer picnic.” (via Fader)

14) Neon Neon, Praxis Makes Perfect. “The bad news is that Neon Neon’s second album is the sound of a band treading water. The good news, however, is that when it comes to Gruff Rhys and Boom Bip’s synth project, treading water means a stylish yet bonkers conceptual pop album about an overlooked historical figure… Where their debut album, Stainless Style, was an ode to the life of DeLorean Motor Company founder John DeLorean, Praxis Makes Perfect is inspired by maverick Italian publisher and leftwing activist Giangiacomo Feltrinelli.” (via the Guardian)

Kyle McGovern
Tags: deerhunter, iggy and the stooges, New Music, Os Mutantes, the melvins, The So So Glos