My wife and I got both of our cats relatively recently. Our previous set of cats lived to impossibly old ages. I guess we’ve had Symphony Sid for about four years and Suzzy for about two. They’re both from a shelter, so I have no idea how old they are. We named Suzzy after Suzzy Roche, a folk-rock musician from the ’70s. The name just seemed to suit her funkiness. She’s kind of dirty. Symphony Sid is named after a jazz DJ in New York City in the ’50s. He was a major popularizer of beatnik lingo. He used the term “daddy-o” and “groovy.” He’s a funny character, and the name just seemed to fit our cat because he is so elegant, but at the same time, he’s a killer.

Symphony Sid is a paradox. He’s just an impossibly handsome cat, and he’s very benign. If you try to hold him, he’s okay with it, but the truth is he is a killing machine. We’re in the country half the time, and it is truly startling how many birds, snakes, frogs, rabbits, mice, just anything, he’ll kill. Sid is just on the prowl all day long. The picture of him with the mouse is his everyday. That’s the continuous trauma of the parade of death. He is a miniature lion. There’s something about lions where they’re very confident, just because they know they’re at the top of the food chain, and he’s kind of got that swagger. 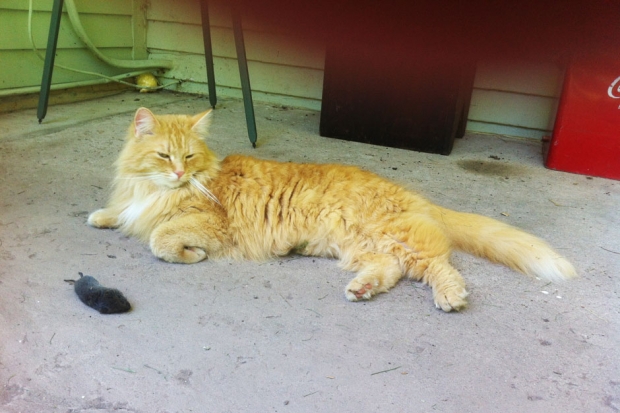 Our other cat, Suzzy, is just literally at my side all day long, which is really nice. When I’m working, she’ll sit in front of the speaker. She’s about half the size of Sid, and she’ll never grow. She’s a perma-kitten. When we got her, she was really sick and it took a long time to nurse her back to health. She just had a really bad cold. She is runty, and I think in a shelter situation, cats like that really get pushed around. So it really was an actual rescue. She was really bedraggled. But the weird thing is, after she got better, she never really cleaned up. She looks like she rolled around in a stick of butter. She’s not very good in the grooming department, so she’s very funky. She’s just very discombobulated and goofy. She’s just really slow. I’m very used to opening the door and having the cat rush to the door to get out into the wild, and she just toddles like Fred Sanford.

I think she might be kind of deaf. I always have to move her out of the way of the speaker. I think she can feel the movement of the air from the speaker, but I’m not sure she can hear it. With Sid, I think it’s safe to say he doesn’t like music. One time when I was driving, I was listening to an interview with Carole King on Fresh Air. They played some of her songs, just incidentally, and Sid just started freaking out. It was like he was being tortured by the sound of Carole King’s voice. It was so strange. Sid likes his tracks deep. Not pop. 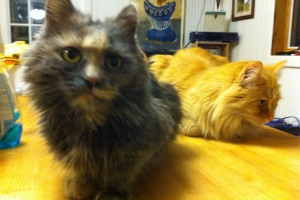 I’ve taken to painting one of our previous cats, the Governor, on ukuleles. My wife got him when he was a tiny, tiny kitten. He was a super-warm creature. He lived to about 16 or so. He was very white, very ghostly. When we got him, my landlady was like, “He’s so clean!” I don’t think he’s any cleaner than any other cat, really, except maybe this Suzzy cat. I think I’ve made a dozen ukulele paintings over the years. It’s just a nice, sort of meditative thing. The Governor had such a clear silhouette, unlike our current cats, who are basically just fuzzballs.

I know we have songs about birds and dogs, but we don’t have too many songs about cats. We just recorded a cover of a really great song from the ’60s called “Walking My Cat Named Dog.” But as they say, we are running out of nouns.

The 16th They Might be Giants album, Nanobots is out this week.