My President Is Rap: The Complete History of Barack Obama’s Hip-Hop Moments 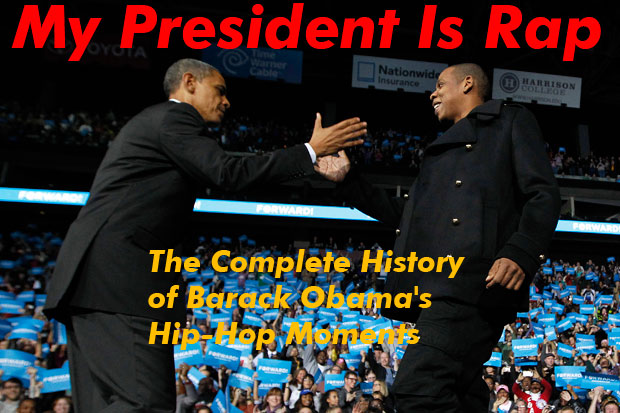 Even though hip-hop has been America’s most vital art form for more than 30 years, our country’s presidents have been less than forthcoming in giving up props. George W. Bush’s most prominent dealing with the culture was Kanye West telling the country he didn’t care about black people. His father’s administration was best known for denouncing Ice-T’s “Cop Killer” wholesale. Even Bill Clinton lambasted Sister Souljah’s statements about the L.A. riots without ever trying to understand that she was not encouraging race riots, but expressing anxiety about entrenched racism in America.

So when Obama first revealed that he not only had some rap literacy, but was an avowed fan? Suddenly, the lights went on. Never before have we had a president who actually engaged with hip-hop as a crucial cultural force, rather than a thing to be held at arm’s length and occasionally scolded. The hip-hop generation had an awakening: Obama brought out more young people to the polls than any president had since we’d been keeping track, no doubt in part because we felt like he might have a chance at understanding us. Here is the history of Barack Obama’s public relationship with rap music. It’s got ups and downs, but what great love doesn’t? JULIANNE ESCOBEDO SHEPHERD