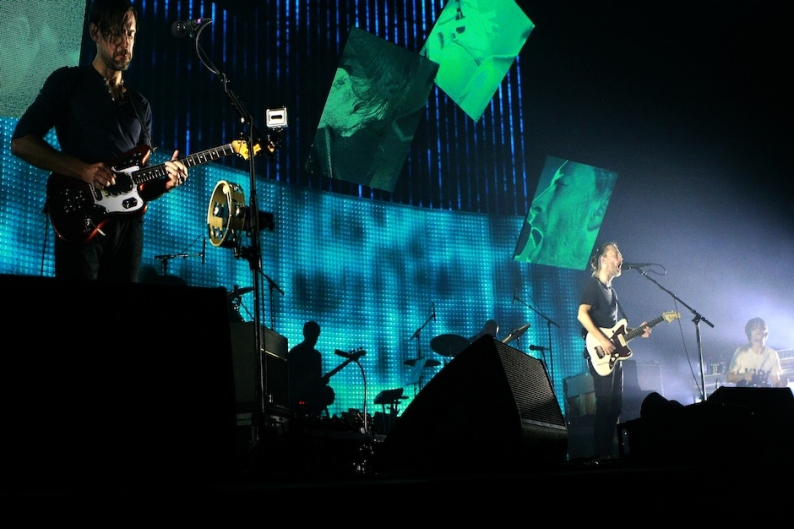 Frustrated at the time with the recording of what would be their seventh studio full-length, In Rainbows, Radiohead opted to spend much of the summer of 2006 on the road. In June of that year, the English arena-rock outliers played a seismic, 28-song set that — in addition to immediately becoming a favorite among fans and bandmembers alike — has long been rumored as the subject of an official live DVD/Blu-ray release. That disc has not yet come to pass, but, as Glide reports, an unofficial website named RadioheadBonnaroo.com has posted a free listen of that full set with soundboard audio from that night.

“It’s hard to believe this was over 5 years ago,” writes Paul Phipps, who also mastered the recording. “But a friend of mine was running sound that night. He snagged the 2-track master from the board and handed the raw WAV over to me. I felt like I scored the mix of a lifetime. I’ve spent twenty years behind mixing consoles and mastering is one of my fortes, so I couldn’t wait to pull the best out of this one. After two months of wrangling, I finally came up with a mix that I loved…After 5 years of keeping this to myself, I had a talk with my friend — and he gave me to the OK to go ahead and release this to the public on the 5th anniversary of this awesome show. Of course, they could tell me to take it down any moment, so I would download the files as soon as possible.” (You may want to hit up the alternate links Glide suggests if you’re going to grab it.)

Included in the set list that evening were several songs that would eventually appear again on In Rainbows (“15 Step,” “House of Cards,” “Weird Fishes/Arpeggio,” and “Bodysnatchers”) when, after a successful return to the studio in September of 2006, that album would finally a see its surprise, game-changing, pay-what-you-wish self-release the following year.