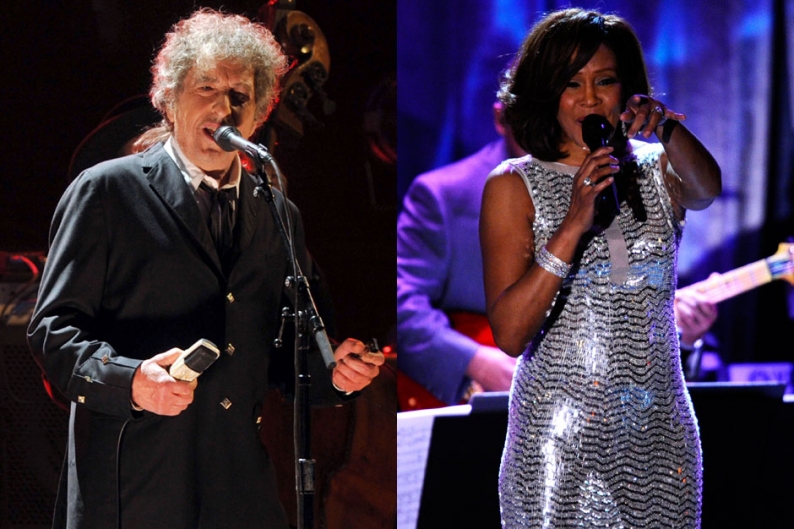 A total of 27 new recordings have been added to the Grammy Museum in Los Angeles, including Dylan’s landmark “The Times They Are A-Changin’,” from his 1964 album of the same name; Houston’s self-titled 1985 debut, the most recent of all the honorees; and AC/DC’s seminal 1980 album Back In Black, which features songs performed on the Australian rockers’ recent live album, Live At River Plate. Other important pop touchstones, such as Little Richard’s 1957 debut Here’s Little Richard, Billy Joel’s deathless 1973 single “Piano Man,” and Paul McCartney and Wings’ third album Band on the Run, have been immortalized as well. Chairman of the Board Frank Sinatra was acknowledged for his “Theme from New York, New York,” as was Elton John’s 1970 self-titled LP.

“With the Grammy Hall of Fame celebrating 40 years, it’s especially important to note that these entries continue the tradition of inducting a wide variety of recordings that have inspired and influenced both fans and music makers for generations,” said Neil Portnow, the Recording Academy’s President and CEO. “Memorable for being both culturally and historically significant, we are proud to add them to our growing catalog of outstanding recordings that have become part of our musical, social, and cultural history.”

With these new additions, the list of Grammy Hall of Fame inductees features 933 recordings, which have been reviewed by a special committee comprised of figures within all branches of the recording arts and given final approval by the Recording Academy’s National Board of Trustees. Last year’s honorees included Bruce Springsteen’s Born in the U.S.A., Dr. Martin Luther King, Jr.’s historic “I Have A Dream Speech,” and Bill Cosby’s 1964 comedy album I Started Out As A Child.

See the full list of 2013 Grammy Hall of Fame inductees below.