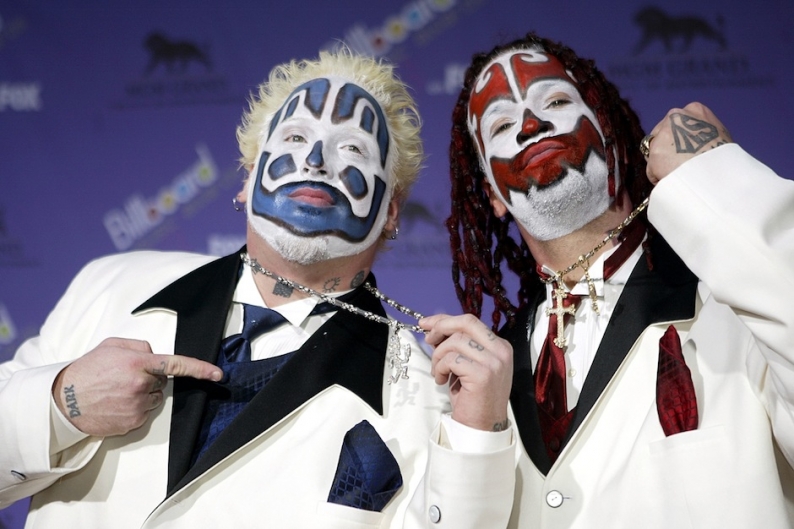 Pity the suburban Juggalo. The Insane Clown Posse were originally scheduled to play their Halloween concert at Royal Oak Music Theater in Royal Oak, Michigan, but now it’s set for the Fillmore theater in nearby Detroit. A rep for ICP says the band had no choice other than to move the show after Royal Oak police expressed worries, TMZ reports.

Tickets for the Royal Oak stop on ICP’s short Hallowicked tour had almost sold out when the venue abruptly canceled the date, according to the face-painted rap-rock duo. A post on ICP’s website says label Psychopathic Records learned a request from the police was behind the venue’s decision to cancel. Resistance from perplexed authority figures is nothing new for the posse: ICP recently sued the FBI for bafflingly classifying their Faygo-soaked following as a gang. That classification was one of the factors cited by police, according to the group.

The police explanation, at least as reported by TMZ, doesn’t exactly prove ICP wrong. The Royal Oak Police Department is quoted as saying it asked the venue to “reconsider” due to “the type of crowd they bring.” The cops also said they were “concerned about the amount of resources they had available that night.” But they reportedly said they didn’t force the venue to cancel the show — for whatever that technicality is worth.

So Juggalos looking to celebrate on Halloween night in the Detroit area will have to leave the suburbs and head into the city. But they probably shouldn’t fret too much. The post on ICP’s website vows, “NO ONE CAN KEEP THE JUGGALOS AND JUGGALETTES DOWN!”