The mysterious crew from Sweden runs the voodoo down 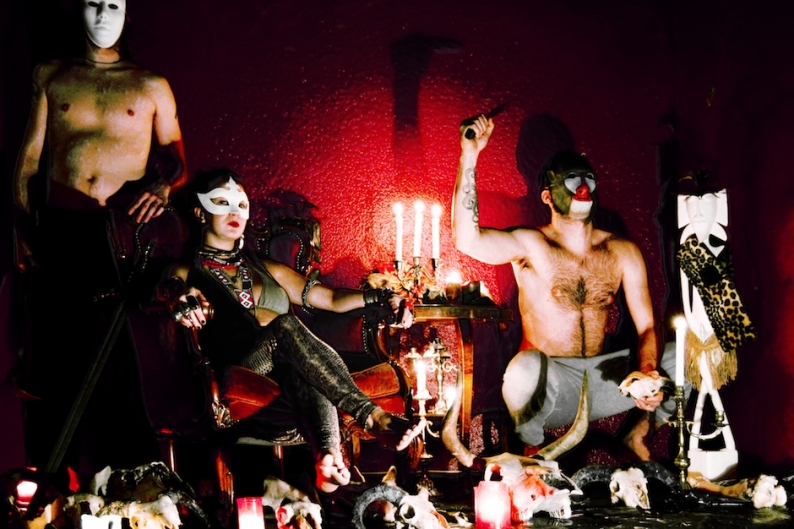 Mysterious collective Goat dropped one of 2012’s most coveted pieces of vinyl with World Music, a damn-near indescribable collision of searing psych-metal, trance-inducing Afrobeat congas, Krautrock infinity-gazing, and demonic disco. Recorded hot-as-hellfire to tape, this thing could be mistaken for a Now Again or Finders Keepers reissue from West-Africa (via Mars), but in fact the group hails from a small town in Sweden called Korpilombolo. The band claims this town runs deep with a history of practicing voodoo and ducking religious persecution, but this may just be another great backstory from a country filthy with genre-bending anonymous bands (holler at us, Ghost). Whatever the deal is, World Music is a delirious mix of brassy, hook-laden, royally thunderous heavy metal; fast-paced Nigerian disco; hypnotic African rhythms mutated through Cuba and Haiti; some accidental bhangra; and a full-on, rocked-out cover of Malian hit “Diarabi.” Hear the whole thing below with our Q&A with the mysterious Goatman!

You’ve talk about the “voodoo traditions” in Korpilombolo, Sweden. What about some of your earliest experiences with it?
The voodoo practiced in Korpilombolo are not the same version as the one practiced in Haiti. But we have thought, since we were small, to have a close relationship with the spirits of our ancestors. This we still have and we achieve this by making music or meditate until we reach a transcendental state of mind. Today it is natural for us to collectively tune in to other dimensions of being.

So, what does performing music mean to you from a spiritual or metaphysical perspective?
Making music is everything. It is where we rest in a way. When we play we normally don’t make “songs” and are only interested in reaching the state when you loose the concept of time and space. You feel drugged and you feel like you are lifted up from the ground. In that state you are completely free and you are connected to the universe. Everyone who has slipped into this state while making music knows what I talk about. But when you try and create albums out of this idea it often falls flat. So when we make recordings we work after other principles. We have never performed outside the commune before so that will be a new experience for us. We don´t know if we will enjoy it, despise it, or find some higher meaning with it.

Three of you form the “core” group. How did you meet and what did you originally bond over?
The core group consists of many more, it depends on how you see it. Three of us moved first to Gothenburg and regrouped Goat with musicians here. Then other early members have followed. The group is not constant or bound to a place. We can jam in Gothenburg and in Korpilombolo at the samt time if you understand what I mean. All members of Goat will never be seen at the same time. And some of us have played together since we were small children.

What type of music were you making as small children?
We were inspired of the older people making music in their versions of Goat. Rhythms have always been a big part of Goat’s music in every incarnation. It has to do with achieving a transcendental state of mind. Elderly people in the village where always playing a lot of drums. You always start with the drums. Later, we got inspired by metal and punk.

What’s up with this trippy album art?
That is actually made by Chris at Rocket Recordings. We gave him free hands, which was proved to be a good idea.

“Diarabi” was a Malian hit for a handful of artists. Where did you first hear it and what drew you to its melody?
We heard it some years ago by Boubacar Traoré. It doesn’t mean anything for us more then it is an incredible, beautiful song. And that is all a song needs to be.

How difficult is it to get African and Haitian records in Sweden?
People presume that we are big record collectors. This is a misunderstanding. We know a lot of music but we don’t collect it or travel over the world to find that missing album. That is a quite boring way to approach music, I think. If you stay open for all music, the music will find you sooner or later. But we love African music, lots of old stuff are rereleased on collections. There are many good ones easy to find. In Goat, everyone are into a lot of stuff at the same time so you get hold of a lot of music for sure.

If you know a lot about music but aren’t big record collectors, how do you discover it?
We have always bought and traded records and cassettes between ourselves. And now we also use internet as everyone else. But we don’t collect it. We are not interested in first pressings and searching around for a rare 7″. We are not professors of certain genres of music, we are just listeners. If you like to discover music, it will find its way into your ears.

Was “Run to Your Mama” influenced by bhangra?
Ha ha! Not by purpose, but we listen to bhangra sometimes and influences are finding its way into the music of course. Now that you mention it, it has kind of the same rhythmic…Funny, haven’t thought of it before at all. Cool.

What’s your favorite “world music” music release of 2012?
I have no idea!