A haunted folk tune from her Fol Chen-produced LP 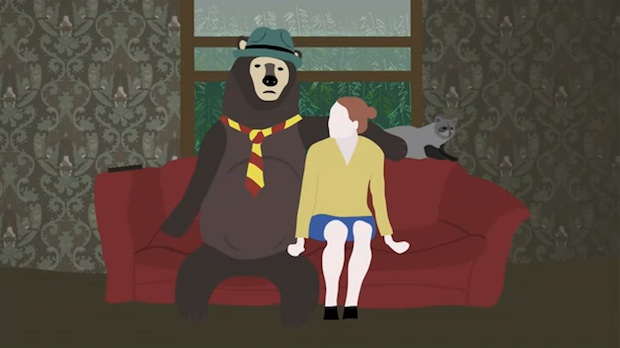 The heartbreaking animated video for Simone White’s “Never Be That Tough” is a classic tale, really: bear falls in love with woman, bear pretends he’s a man, woman teaches man-bear his true nature, bear-bear eats woman. There is a wistful twist, however, to the Nancy Jean Tucker-directed clip, which well matches the mood and message of the Los Angeles singer-songwriter’s lovely song.

We debuted White’s R&B-tinged “What the Devil Brings” back in April, but while this latest song hails from the same underrated Silver Silver album — produced by the odd-pop auteurs in Fol Chen and released on Damon Albarn-affiliated Honest Jon’s label — “Never Be Tough” is gentle and haunting, a minimal folk ditty about embracing those who would embrace you.

“At first I was struck by Simone’s beautiful voice and the sweetness of the song, but the more I listened, a dark almost foreboding quality emerged,” said Tucker, who’s directed videos for Fol Chen as well. “I tried to express this with my animation: a cute love story between a girl and a bear that quickly falls apart and becomes a tragedy. But the girl survives, transformed by the end. As the song says, ‘you could lose everything and it will still be alright.'”