Only Madonna has graced the awards show's stage more times than Billie Joe Armstrong and Co. 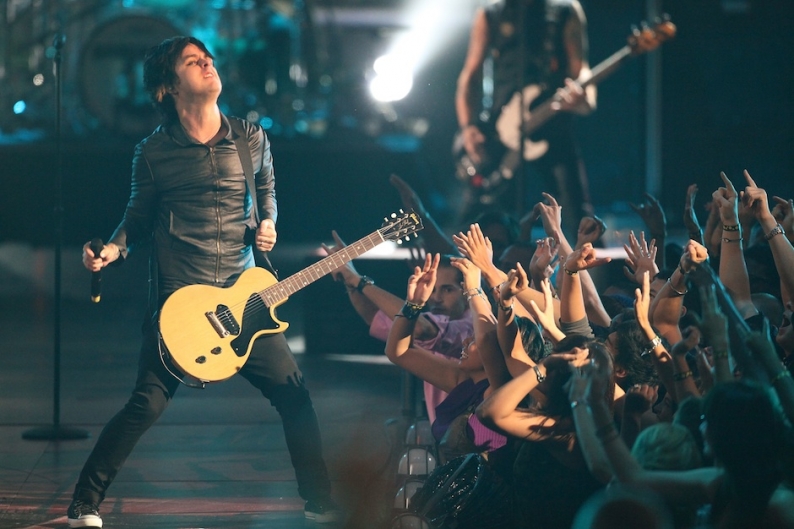 With five performances at the MTV Video Music Awards and 11 Moonmen under their studded belts, Green Day are VMA all-stars. In fact, only Madonna can claim more appearances on the awards show’s stage. Over the last two decades, the pop-punk trio has grown from camera-shy twenty-somethings to center-of-stage showmen asking spectators if they want to be on TV. But which version of the band put on the best show? With the lackluster 2012 awards show in the rear-view mirror, we took a look back:

Don’t be fooled by the song’s title — the band’s most recent turn on the VMAs stage is our least favorite because it felt restrained and by-the-numbers. Any MTV mosh pit is bound to be a faux one at this stage of the game, which makes Billie Joe Armstrong’s attempt to rile up a little anarchy in the Staples Center feel forced. As you’ll see below, he’s invited stage crashers to invade the band’s performances much more convincingly than this.

For their first VMA appearance, the then-fresh-faced trio decided to premiere a new track from their then-upcoming album, Insomniac. They ripped through a two-and-a-half minute rendition of “Armatage Shanks” with little fanfare and pretty much zero acknowledgement that anyone was watching. The pyrotechnics and the audience banter would come later. Here, it’s just a young band, very much in their “fame sucks” period, with just enough snarls to be obnoxious but remain fun. (And hey: a stage diver at the 2:20 mark!)

A hard-earned victory lap. This rendition of the American Idiot mega-hit is so earnestly delivered, it almost makes you forget you were probably tired of hearing it by the time the ’05 VMAs rolled around. Tré Cool and Mike Dirnt’s playing are locked in with Armstrong’s voice, which sounds clear, confident, and revitalized. The trio brought enough pyro to flatten a mini-mall, and the heavy, washed out guitar solo that closes this performance captures a band at the height of their second wind.

Green Day’s second turn on the VMA stage was executed with a better calibrated blend of energy, attitude, and hooks. They’re a tighter trio than they were in ’94, and one that was more aware of their audience (you’ll note they instruct fans to spit at the cameramen — charming!).

Fifteen years after barely glancing up on the VMAs stage, Armstrong demonstrates how well he’s mastered manipulating a crowd. The singer/guitarist is having a great time with this cut from 21st Century Breakdown, delivering an in-command, pitch-perfect performance in which he leaps from a whisper to marching orders in a flash. And, surprisingly, it’s thrilling when he crowd-surfs just before the camera pulls away. If you’re going to go big-budget blockbuster on the MTV stage, it doesn’t get much better than this.