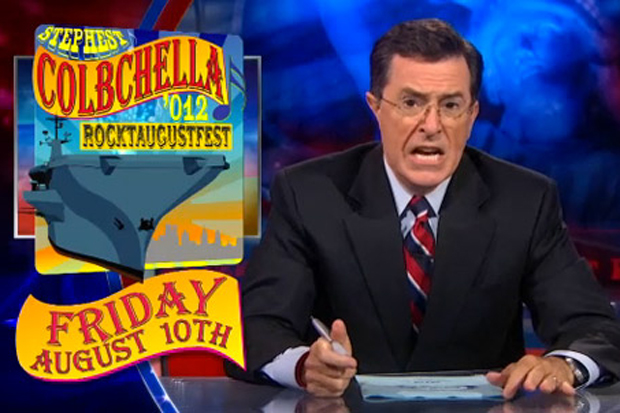 On last night’s Colbert Report, host and self-proclaimed “big player in the music biz” Stephen Colbert announced the lineup of StePhest Colbchella ‘012: Rockaugustfest — his second-annual music fest. The inaugural installment featured Talib Kweli, Jack White, Bon Iver and “Florence and Her Machine.” Artists scheduled to appear this year include Santigold, Grizzly Bear, the Flaming Lips and fun. “I love fun.,” Colbert said of the latter band during his announcement. “I hear their shows are a ton of band.” Grandmaster Flash will be DJing. The show will take place August 10, beginning at 7 p.m. on the USS Intrepid, a hulking World War II aircraft carrier that the U.S. Navy used in operations around the Marshall Islands and Okinawa, among other places, and serves as an air and space museum on New York City’s Hudson River.

“I know all the hottest, latest bands like Bonnaroo and Lollapalooza — those guys are great,” Colbert joked. “And now it’s summer and that means it’s time to remount my long-running, one-year tradition of throwing my own summer concert.” He later added, “In the ‘music biz,’ you’ve always got to reinvent yourself, like Madonna, David Bowie and Paul Simon after he got that weird growth removed,” deleting Art Garfunkel from a photo.

Watch the full announcement below, which features a (sort of uncomfortable) cameo by Michael Stipe. For more information on the festival and, as Colbert promises, chances to get free tickets, visit colbertnation.com. “This will be the greatest thing ever to happen on the Hudson River,” he said. “Suck it, Sullenberger.”