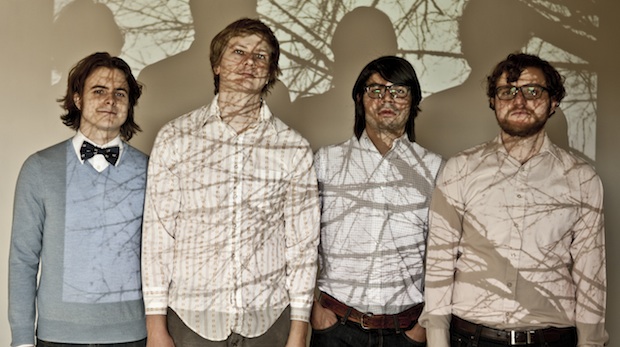 Louisiana quartet Brass Bed just announced they’ll kick off a new West Coast and Midwest tour on August 17 in Baton Rouge. The band’s late-2010 album, Melt White, showed a knack for catchy, guitar-driven, vaguely twangy psych-pop that showed a clear affinity for the Elephant 6 collective — just try and get “Bums on the Radio” out of your radio-filled ears — and they’ve since tackled a Harry Nilsson covers EP as well as a set of mutual covers with fellow Louisiana group Feufollet. “A Bullet for You,” the title track from Brass Bed’s new three-song 7″, is their best yet: a smoke-wreathed piece of pleading, romantic rock that explodes into a gnashing guitar solo redolent of post-Yankee Hotel Foxtrot Wilco. “I’ve been thinking I could quit this,” Christiaan Mader begins, his voice pinched and expressive. Despite the self-destructive conclusion, quitting clearly isn’t in the cards anytime soon: Brass Bed’s next album, The Secret Will Keep You is due out in 2013, and their new song shows they’d already do anything for you — yes, Meatloaf, even that.