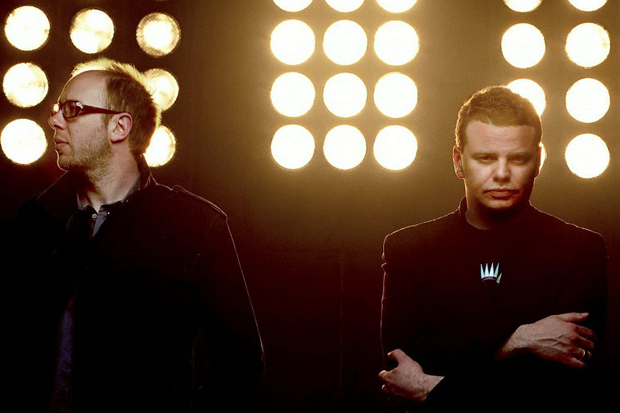 Daft Punk might get all the retroactive glory, but Chemical Brothers’ head-busting approach to electronic dance music remains as clear an heir as any for the recent North American block-rockin’ beats revolution. Ask anyone who’s seen them live. Given this increasingly global legacy, it’s only fitting that the Manchester duo contributed a track for the 2012 London Olympics — all the more so when considering their selection is tailored specifically for the Olympic cycling venue, evocatively known as the velodrome. Premiered last night on BBC Radio 1 (via 107.7 the End), the Chems’ “Theme From Velodrome” is more grandly orchestral than most of their best work, which SPIN contributor Chuck Eddy once described as “sounding like when you’re riding your bike and a car passes by really fast blasting hip-hop really loud,” but it’s no less appropriate for a techno-futuristic tour-de-synths. “Vel-o-drome,” a Kraftwerkian robot voice intones. Frenetic electronic rhythms convey a sense of perpetual motion. Other Olympic-themed tracks from Dizzee Rascal, Elton John, and Delphic are still to come, but compared with efforts so far from Muse and B.o.B./O.A.R., these Bros are the champions, friends.