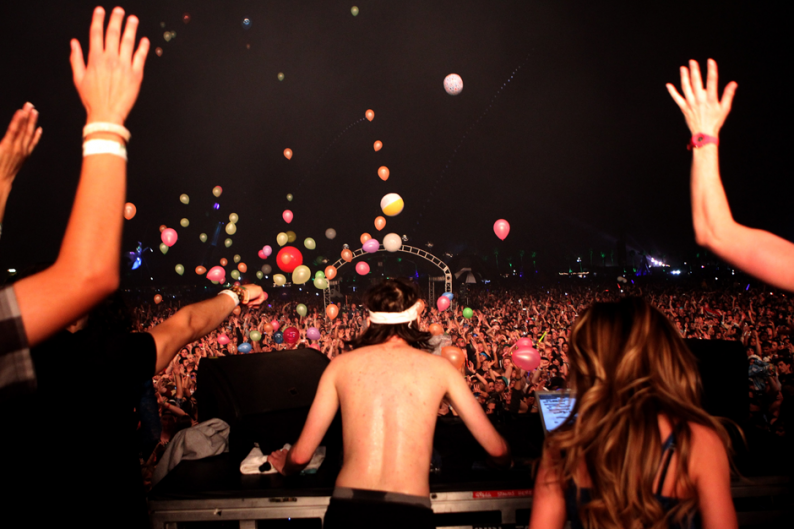 Girl Talk
Girl Talk should consider a fulltime job as a festival fluffer, as it were. Gregg Gillis’ omnivorous appetite for both nostalgia and upbeat pop makes him perfectly suited for channeling 80,000 music fans’ interests into one big hyper-color bouncy ball of sing-along bliss. Not to mention the fact that he’s always devising new supergroups: Bruce Springsteen fronting N.E.R.D., Elton John meets Notorious B.I.G., that Big Sean and Jimmy Eat World collabo we were all waiting for (and without relying upon holographic technology). He’s got something for everyone and he always keeps it moving — both metaphorically by never letting any one act overstay its welcome, and literally: He must lose 10 pounds up there with every performance, taking the stage in sweat pants and a hoodie, and running in place the entire time, taking breaks only to dance, head-bang or otherwise hype his loyally roiling audience. Taking the stage with 20-odd friends who simply partied the entire time, he worked in a handful of references to Coachella’s 2012 lineup (including “Forgot About Dre” and “Karma Police”), and finale’d under a rain of sparks and confetti. CHRIS MARTINS

Company Flow
While Coachella saw its share of firsts (the first Weeknd show, the first West Coast Jeff Mangum dates), Sunday’s Company Flow performance was its most famous last — the final reunion show for the pioneering alt-rap firebrands. Skipping the tears and emotion of their last farewell in 2001, the three members just ripped through a killer rap show: El-P keyed up, spilling his drinks and leading the crowd in shout-alongs; Big Juss double-fisting the mic and rocketing through flurries of words; and DJ Mr. Len tearing more than one Run-DMC record to shreds. “Ladies and gentlemen, a real DJ” beamed El-P, possibly some #shotsfired at the dudes in the Sahara Tent who had been hiding all their gear behind lights and podiums all weekend. All smiles and high fives, the two MCs ended up face-to-face with the audience at set’s end, and — refusing to look back completely — El-P dropped his new single “The Full Retard,” which got a ravenous response despite only existing as an MP3. CHRISTOPHER R. WEINGARTEN

Modeselektor With Thom Yorke
While the rest of the fest migrated to the main stage to party with Dre and Snoop, a small cadre of IDM loyalists were busy wilding out to Modeselektor, Berliners whose interest in electronics ranges as broadly as Basement Jaxx’s, even if they stay a little more strapped to the four-four pulse than that other duo. In truth, the majority of their set wasn’t standout. While Gernot Bronsert would tend to the machinery, Sebastian Szary would walk to the front of the stage and demand applause, even when there wasn’t a whole helluva lot to clap for. But he knew something the crowd didn’t. As the pair’s time wound down to the final five minutes and another layer of kids peeled away to go watch the headliners, Szary casually announced the big news: “Coachella … are you ready … for Thom Yorke?” Fans in egress made abrupt 180s, streaming back in as a compact giant of electronics-addled rock did his trademark bop and jitter to the suddenly hyperactive, soul-streaked beat. As he sung their collaborative song “Shipwrecked,” he kept up the convulsions, at one point playing peek-a-boo from behind Szary’s hulking form. And while those few who’d stuck around were handsomely rewarded for their patience and interest, Coachella’s masses missed out on one of the most intimate performances Yorke’s given in years. C.M.

Seun Kuti & Egypt 80
Coachella’s second weekend was so sweltering that it’s hard not to speak of the entire thing through a lens made of melted desert sand, but it’s worth mentioning with Seun Kuti and Egypt 80. The pedigreed Afrobeat collective (Seun’s the son of Fela, the band belonged to pops) played at the height of the heat at the painfully exposed Outdoor Theatre, but their unceasing rapid rhythms flagrantly defied the laconic mood elsewhere and even seemed to roll back the thermometer-busting degrees a couple of notches. That was a trick of the sweat they inspired, of course, and none was losing more electrolytes by the bucketful than Kuti himself, who spun his arms, shook his shoulders, strutted and stomped while backed by a flurry of brass notes. If he could do it — in slacks, no less! — than so could we. C.M.

Flux Pavillion & Dr. P
The first drop from these bleeding-edge bass addicts came at 2:54 p.m., a solid minute before their set was even supposed to start. In the 55 minutes that followed, they probably had more drops per square inch than any other artist rattling the Sahara Tent. Standing in the center was somewhere between euphoria and torture, every part of your body vibrating when they unleash their signature “Bass Cannon.” And every other part of their set was about big releases too — instead of opting for dubstep tweaks of big pop songs, they went with the even-more-infectious Tetris theme. It was pretty potent as dance music, pop music, mosh music, skank music or SunnO)))-level avant-garde full body massage. However, their visual aesthetic of wiggling Microsoft-Windows-level speakers could use an upgrade since they are getting all that Watch the Throne money. C.W.

Thundercat
We had to check out schedules to make sure the dude who made last years excellent The Golden Age of the Apocalpse was the same as the crew onstage at the Gobi Tent. Without the heavy production hand of Flying Lotus turning this into a post-modern chilltronic stew, this nine-piece band was almost straight jazz fusion. Aggressively mellow, Thundercat’s monster bassist Stephen Bruner full on King Crimson on his six-string bass, his band working out grooves in that magically broken space between funky and nauseous. All sexy sax solos, Herbie keyboard flurries and R&B-via-Beefheart, they’re the world’s weirdest jam band. No highs or lows in sight — best seen through the crowd misters. C.W.

Growlers
From Feist’s elaborate orchestra to Dre and Snoop’s scripted spectacular, Coachella 2012 has been a constant source of performance professionalism. Which is why it’s all the more important that someone put it down for the wastetoids, beach bums and total shitheads among us. Leave that task to the Growlers, a Costa Mesa quintet of acid burnouts waiting to happen whose sloppy psych-pop makes like a mash-up of the Doors and the Grateful Dead, even if they sometimes end up sounding like a West Coast Woods, or a completely sloshed version of the Strokes. Leader Brooks Nielsen sported a fluorescent floral muumuu and clung to a beer can in between slurred lines of song and barely intelligible banter. (One lucid moment had him directing the crowd to “pull out a titty.”) But despite the fact that he couldn’t seem to stay vertical without leaning heavy on the mike stand, the mustachioed sleazeball was the perfect frontman — endlessly entertaining and oddly charming all the way to the end, where he seemed to slip off the edge of the stage and into the waiting arms of security, who no doubt saw that coming from the beginning. C.M.