‘The Killing’ Debated by a Fan and a Hater

AMC's controversial series returns this Sunday. But should you care? 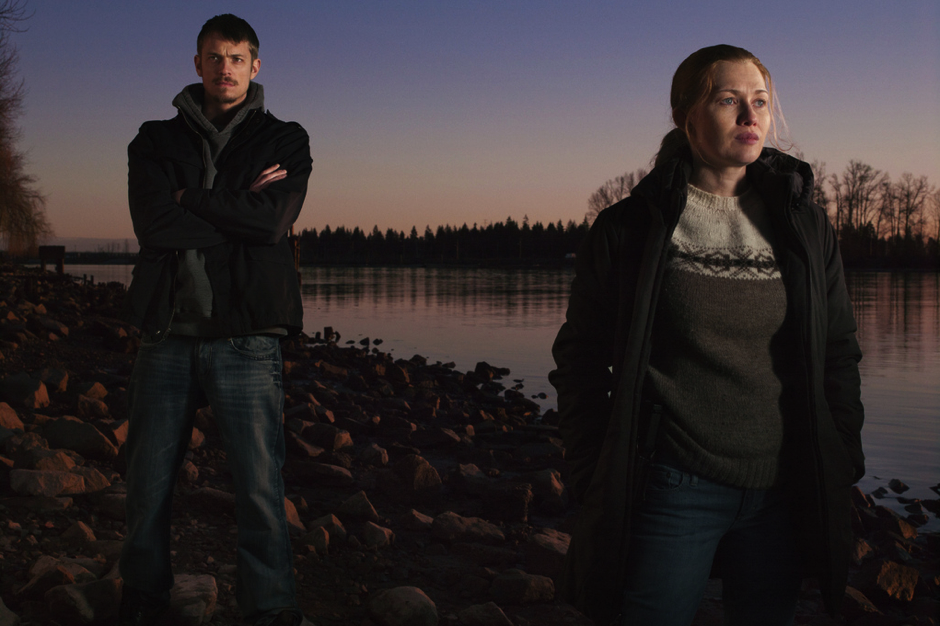 When the season one finale of AMC’s crime drama The Killing aired last June, it was met with outrage from fans and critics alike: Seething tweets, bilious recaps, and several demands for the head of showrunner Veena Sud. The network’s “Who Killed Rosie Larsen?” campaign had, with this question, implied that audiences would actually know who killed the teenage girl by the end of the first 13 episodes (although the Danish television show that the series is based on unfolded in 20). But a last minute twist left the mystery intact: Lead detective Sarah Linden (Mireille Enos) was sorta double-crossed by her down-with-the-lingo-yo partner Stephen Holder (Joel Kinnaman), who provided false evidence framing prime suspect, mayoral candidate Darren Richmond. (Actually, when we put it like that, it does sound pretty intriguing.) A lot of people were pissed. Others, like SPIN’s Joe Gross, thought those people were overreacting as well as overlooking the finer qualities of the series. Sud was obviously chastened — a note accompanying the press screeners said Sud and AMC “learned a lot” from the reaction to the finale and promised that the killer would be revealed by the end of the season. In preparation for this Sunday’s two-hour premiere, SPIN debated the merits of season one and discussed season two.

Phoebe: Okay, let me start by saying that I was squarely in the enraged camp at the end of last season. I felt like we’d been promised an answer to a question, we’d been jerked around all season with deliberately false leads, and by the end of it, I was really frustrated.

Joe: I think all you people need to calm the fuck down. Yes, you were maybe sold a false bill of goods. AMC was well aware that Rosie’s killer wasn’t going to be found and yet did the whole “Who Killed Rosie Larsen?” campaign anyway. A much better model is Homicide: Life on the Street. Remember Adina Watson? That case wasn’t solved for years and nobody minded. Why? They had other things going on, yes, but they also said up front, “Some cases will be solved. Other will not.” AMC should have just said, “Look, this is a show about the journey, not the destination.”

Phoebe: So how enjoyable did you find the journey last season?

Joe: I quite liked it. Based on the intensity of the first few episodes, I thought it would actually get MUCH darker than it ultimately did. I think Mireille Enos is doing a bang up job. And, in slightly better hands, her Detective Linden could be Jane Tennison-good. [The original Prime Suspect’s] Tennison is of the most interesting female detectives of all time.

Phoebe: I feel ambivalent about Linden. The gum-chewing drives me nuts.

Phoebe: Yeah, but it’s so clearly an affectation because every cop needs an affectation. She also stares into the distance and solves things. Does that ever actually happen? I think Sud is out of her league.

Joe: I agree. Sud came from a more conventional procedural — Cold Case, for those playing at home. Here’s my theory: the Danish version was 20 episodes. They had two choices: Compress or expand. They chose the latter while implying the former and that was a HUGE mistake. But I am also a big fan of ambiguity. I don’t necessarily mind if the killer is never caught.

Phoebe: I think the ONLY reason people were watching was to find out who the killer was! What else is there? Who cared about the mayoral election?

Joe: That was the most cliché aspect of the series. I think the premise of the show was solid. Here is a murder and here is the aftermath: The police side, the family side. I like the leads. I like the mood and the northwestern noir vibe. I am even okay with a few of the subplots. I thought the grief-sploitation in the first half of the season was quite good.

Phoebe: I’m not sure how interested I am in watching people grieve for a character we don’t know. Laura Palmer was in Twin Peaks. Rosie has been mostly absent. We have no sense of who she was when she was alive.

Phoebe: When you think about it, the night Rosie Larsen was murdered was a BUSY night for all the suspects involved. The skater kids were having lots of sex, the teacher was helping teen girls escape genital mutilation, and, as we learn in season two, Darren Richmond was also up to something pretty big. It’s far-fetched. What separates this from Leverage or Burn Notice?

Joe: USA, TNT, those shows know exactly what they are. The cheapest thing on The Killing is the routine cliffhanger/dismissal. It’s like flop sweat.

Phoebe: The plot points seemed desperate, like they’re plugging holes in their own story every time they sit down to write an episode.

Joe: How did you feel about Lost?

Phoebe: Angry! Like I was lied to. I totally regret going past season three.

Joe: But the finale for season three (“We have to go back!”) was one of the most amazing episodes of television I have ever seen.

Phoebe: The Killing hasn’t had one episode where I’ve thought: That was amazing.

Joe: See, I disagree. I think the mood and pace is quite good. I loved “Missing,” the bottle episode where Holder and Linden are riding around, thinking her son might be dead.

Phoebe: They have good chemistry. But I think the writers are stalling. How many scenes do we need to see of Linden missing a plane to Sonoma? She needs to think before rebooking a flight.

Joe: That’s pretty silly. Like I said, it should have been a one season, 16-episode story arc.

Phoebe: Or it could have been a six-episode mini-series. How satisfied are you with the first two episodes of the new season?

Phoebe: Do you think we’ve met the killer yet?

Joe: Man, we better have. THAT would turn me into a hater. That’s my point about the long season. You can meet the killer late in season one, but season two? That’s just rude.

Joe: Yeah, she is looking a little sketchy.

Phoebe: Although who hasn’t looked sketchy at this point?

Joe: I was just gonna say that.

Phoebe: So you’re excited to watch every week?

Joe: Yes. I like the depressive noir aspect — this show makes the Seattle of Se7en look like San Diego — and the performance of the leads keeps me coming back.

Joe: I am rooting for something either truly fucked up at the center or something so banal that it emphasizes the sheer waste that killing this kid represents.