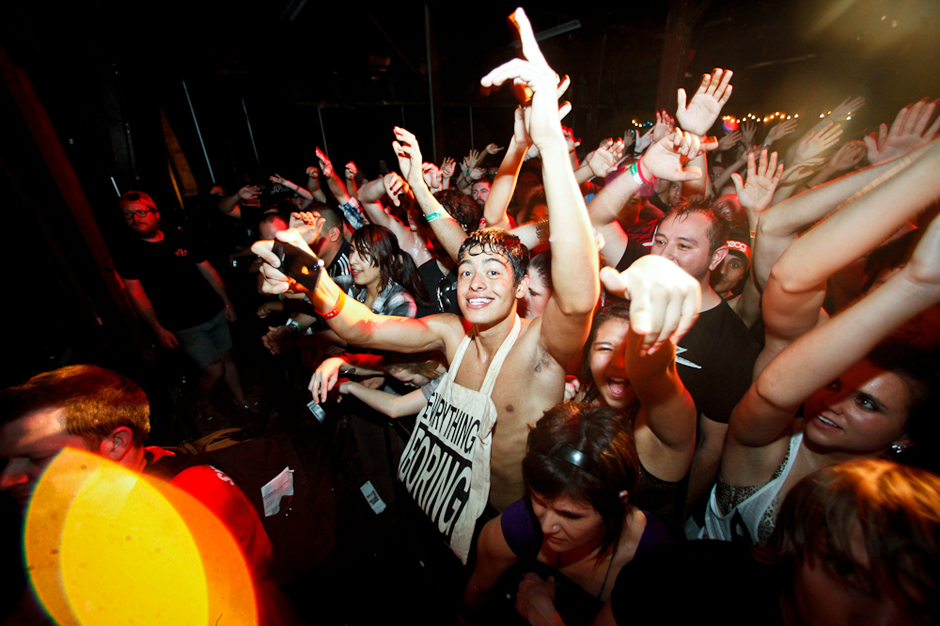 SXSW is undoubtedly the music industry's Spring Break: a five-day bacchanal of bleary-eyed nights, hard drinking, spicy Tex-Mex food and possibly seeing a band or two. Unfortunately what goes down must come up. We caught up with 19 of our favorite artists — including Charli XCX, Cloud Nothings, Ceremony, El-P, and Andrew W.K. — and found out exactly who parties til they puke. This one's for you, bold college-student-party nation!

SXSW is undoubtedly the music industry's Spring Break: a five-day bacchanal of bleary-eyed nights, hard drinking, spicy Tex-Mex food and possibly seeing a band or two. Unfortunately what goes down must come up. We caught up with 19 of our favorite artists — including Charli XCX, Cloud Nothings, Ceremony, El-P, and Andrew W.K. — and found out exactly who parties til they puke. This one's for you, bold college-student-party nation! 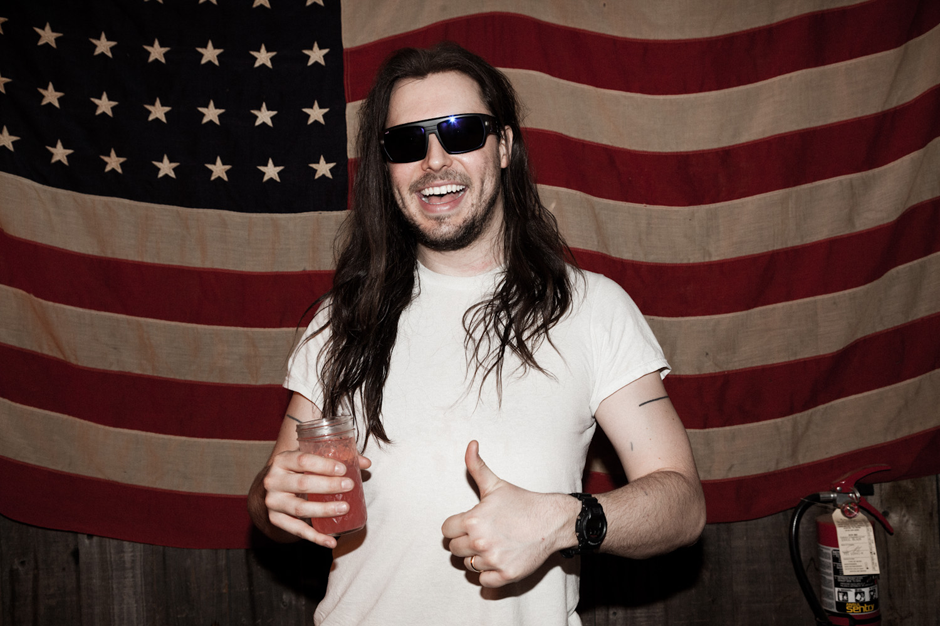 Actually, it was last night and this was quite frightening to me. I had eaten quite a bit of food throughout the whole day, starting with a Waffle House breakfast, then Cracker Barrel like less than three hours later, then a huge San Antonio Mexican dinner. And I actually never went to the bathroom the whole day, not to be too graphic. So the food was really piling up inside of me; and a lot of the Mexican food had a lot of spicy jalapenos, hot sauce. And I was burping all night in my sleep to the extent that it would wake me up out of a deep sleep. One of the burps was actually puking and I managed to catch it my mouth before it spilled out into the bed and onto my wife. Then I went to the bathroom and swallowed it back down and used it as an acidic lubricant to push out solid waste from the other end. If you don't have coffee, you can always puke and use that as a stimulant and a digestive. 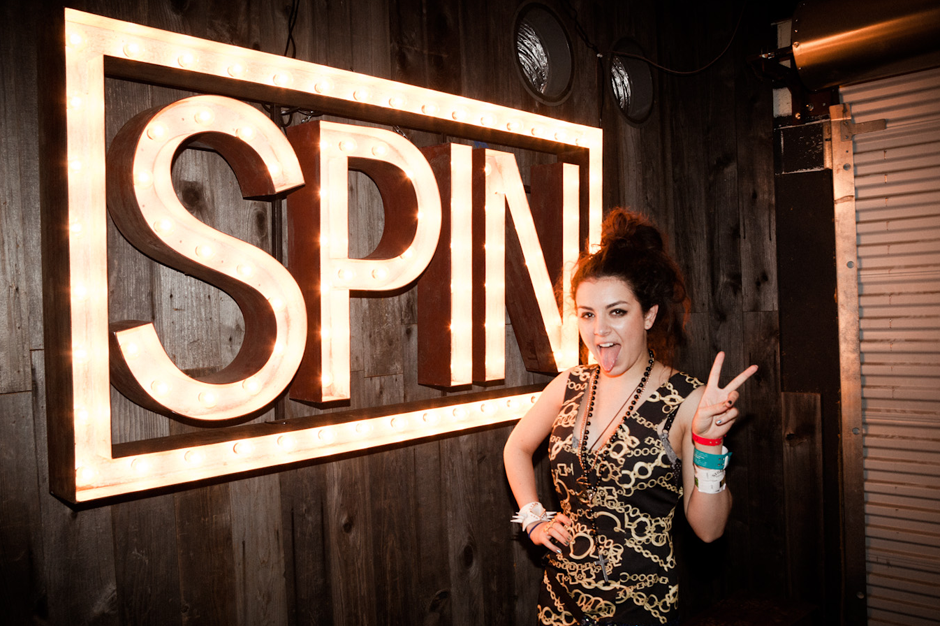 It was actually the morning before we went away on tour. We had a big party and my friends brought me over like British souvenirs and we got really drunk, but I had a shoot with Wonderland magazine the next day. So I rocked up with puke in my hair looking like an absolute tramp. They weren't very happy. 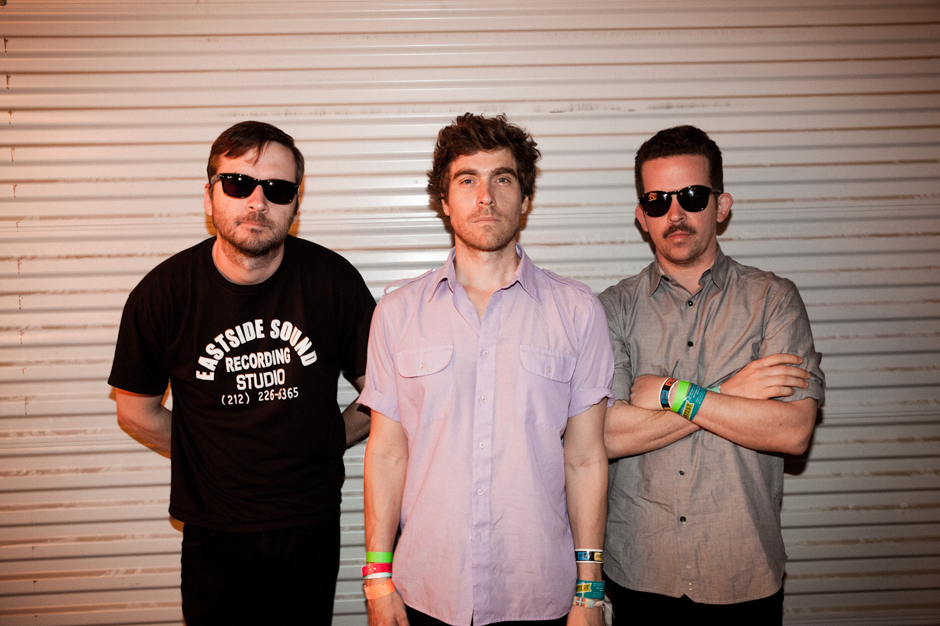 Jon Philpot, frontman: Airplane coming home from our last show in Mexico. Thankfully we were seated right next to the bathroom. And then these guys didn't even know I threw up too. I was really discreet about it.
Joe Stickney, drummer: Which is great because out of the three of us you do like the least amount of quote unquote "rock star things." Like he's the first to bed, first to wake, but you just did our most awesome thing: puking on a plane on the way back from Mexico. 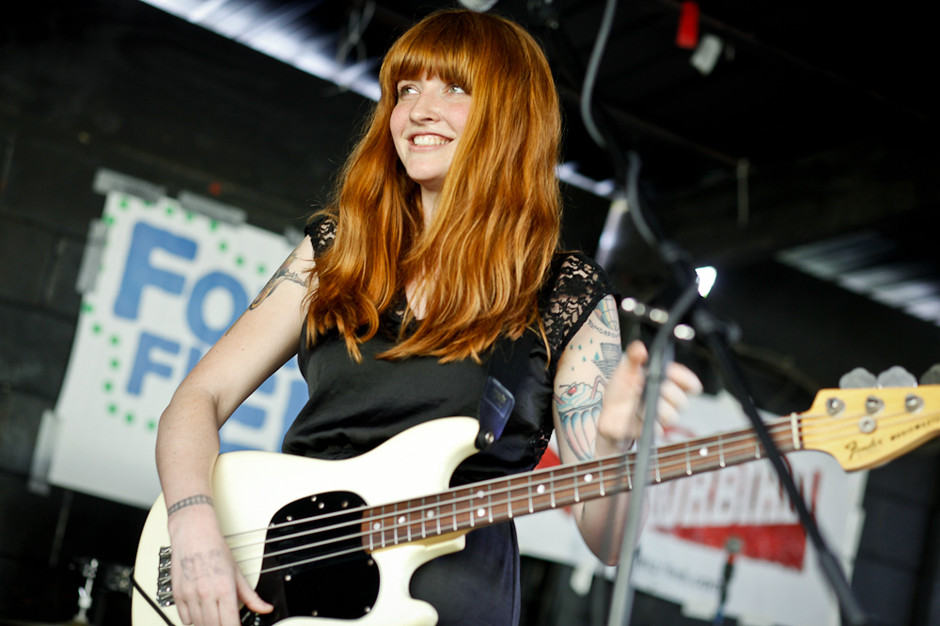 Katy Goodman: I have emetophobia, that's a fear of vomiting. I don't vomit. And no one else does either. Okay, I don't really have that, but I don't like vomiting. I know no one does, but I really don't like it. Last time was 2004 or 2005 — I took a pill that made me throw up and I could not do anything about it. 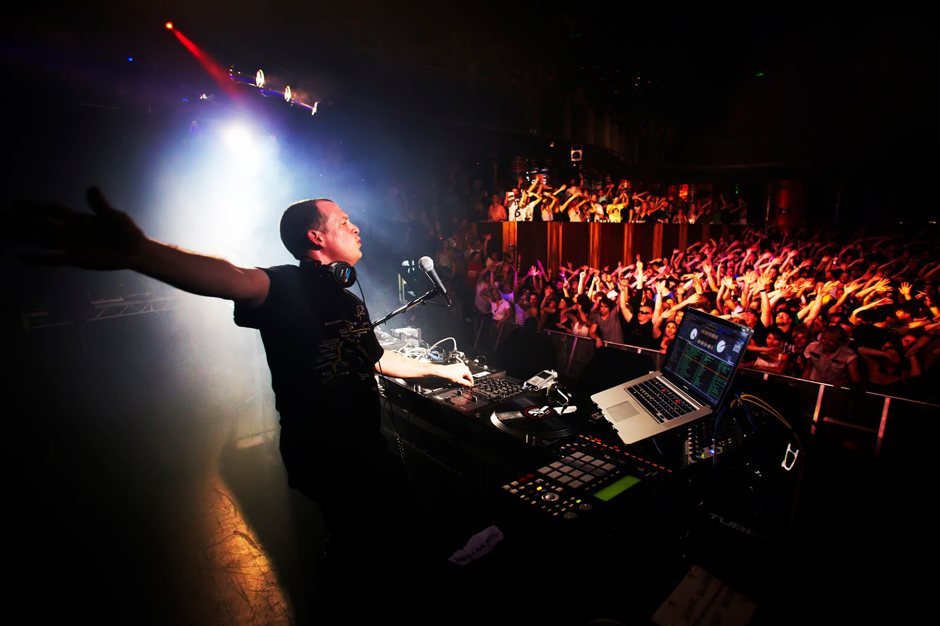 Oh my God. I think it had something to do with tequila. The last memorable puke I think was San Francisco while I was DJing. People were handing me shots and my body doesn't react to tequila at all. I can drink anything else, tequila just doesn't work. And someone handed me a shot of tequila and I didn't realize it was tequila. I took it all the way back and like, mid-set I just turned right around. I had to throw up wherever I was at. I just kept spinning. No one ever saw, nobody knew, but I knew and it sucked. Whoever [cleaned it], I apologize profusely right now. That was me, that was my bad. But blame the guy that got me the tequila shot. 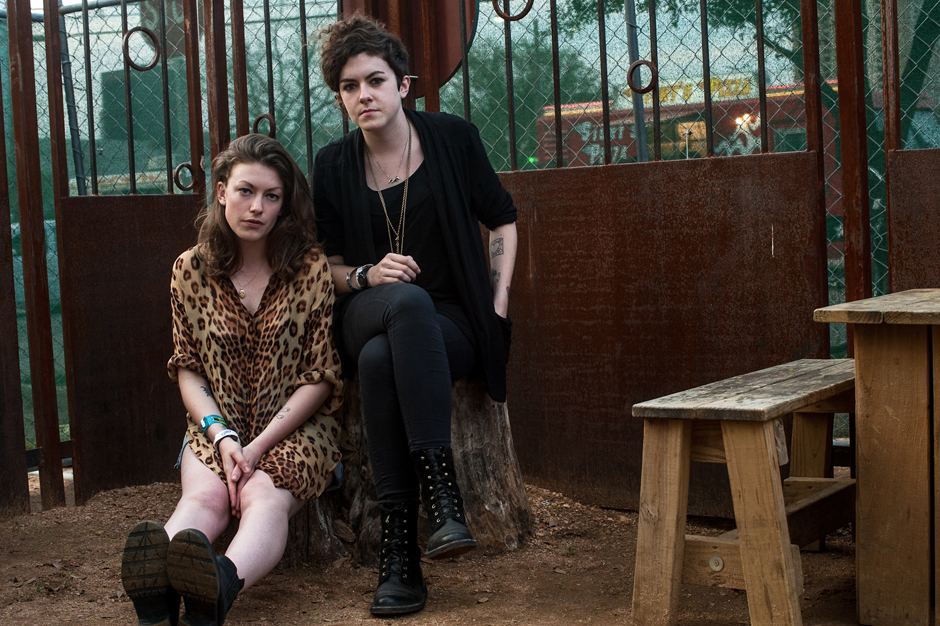 Colette Thurlow: Definitely tour-related. On the Big Pink tour. One of those delightful Travelodge moments of a morning.
Hannah Thurlow: I get travel sick. 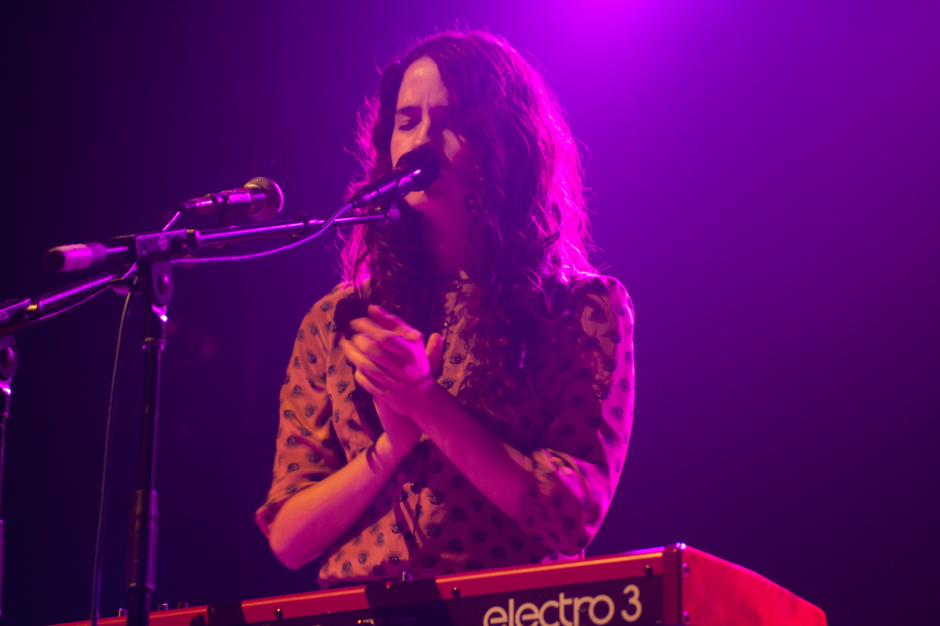 I really don't remember. Thank God, because I been super drunk and hung over. 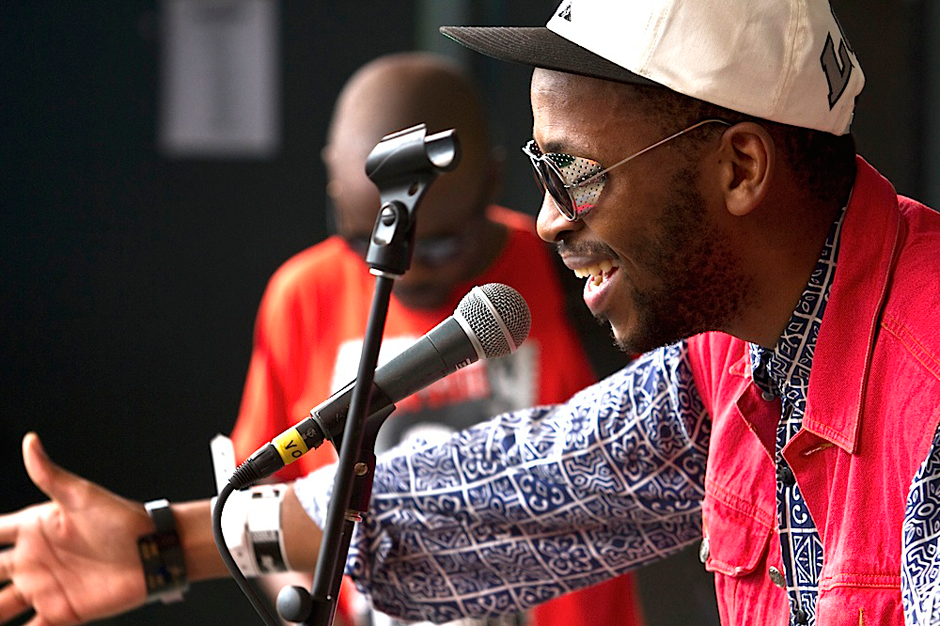 Theo Tuge, pianist: I went on this tour like a theater group and this girl disappointed me. I was talking with some other German dude and I just drank myself crazy with beers I didn't know and like, whiskeys and stuff. And yeah, I went to the bathroom and was not nice. 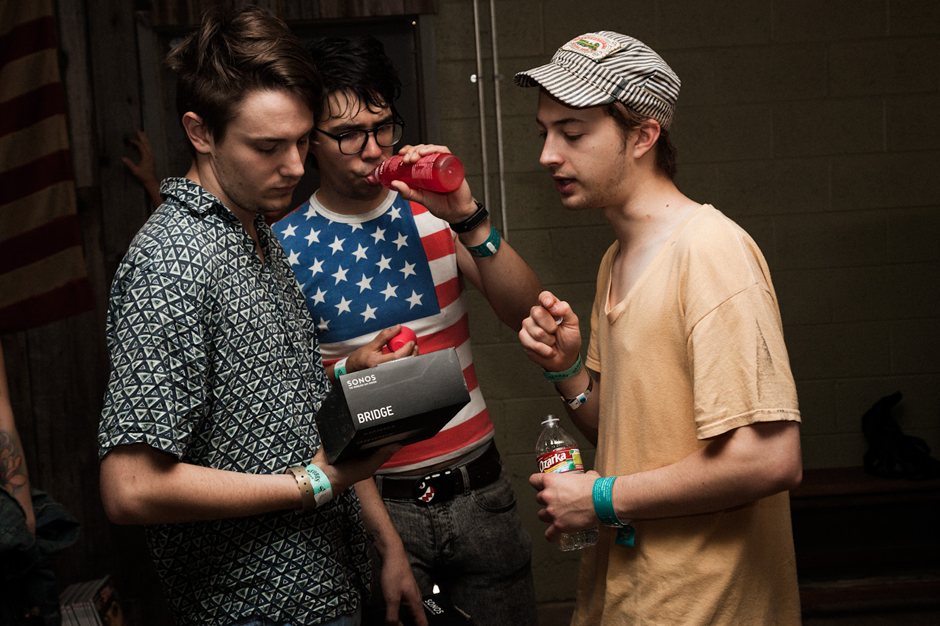 Ryan Engelberger, bass: I had just gotten mono and we were playing this show in Gainesville. But I think it was just because my body was sick and had a drink — maybe two drinks that night. We played and then I felt really shitty for no reason. I felt like I had been roofied and I ran to the bathroom and I threw up. Then I couldn't move for the rest of the night and sat in the back of the bus. So I either got roofied or my body just shut down. You just went on tour with mono, you retard. 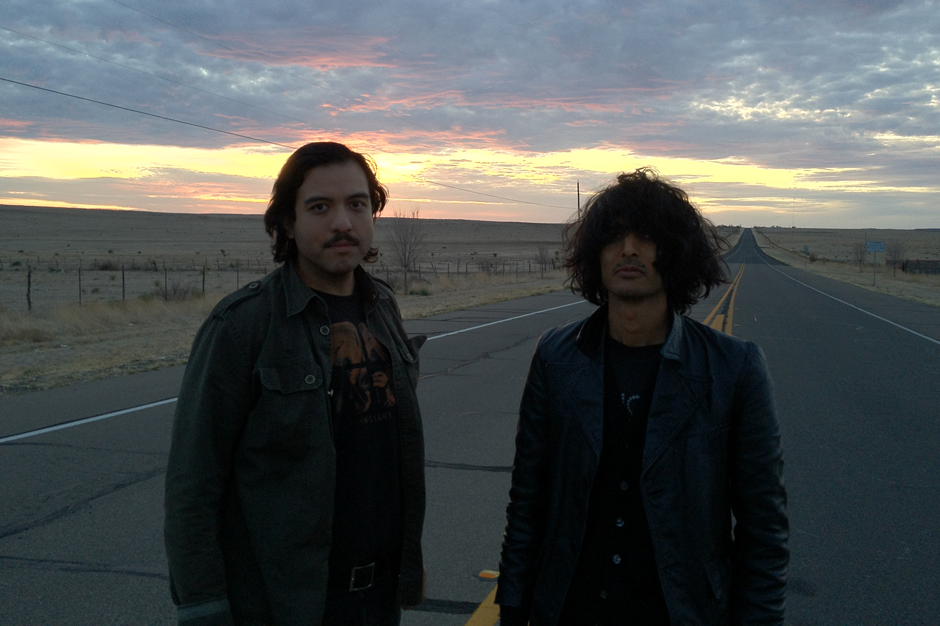 Josh Garza: Last time I was hungover. Do you want a date? 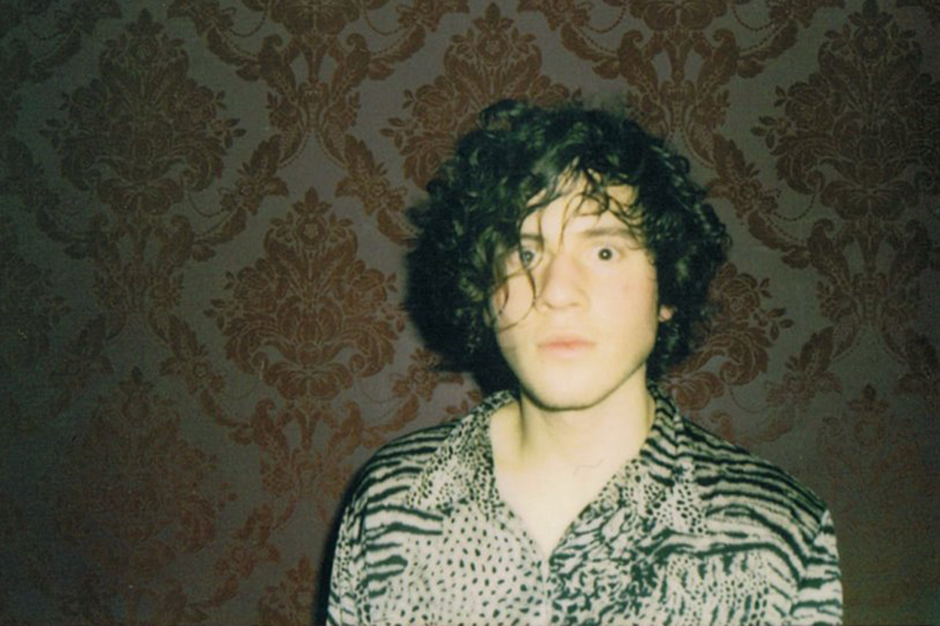 Brad Oberhofer: We got in the van and we were driving to Connecticut and I couldn't handle it and I puked in a big paper bag. Everybody got really scared and thought it was gonna get on them or get on the van. It didn't, I kept it contained. But I cry more than I puke usually. 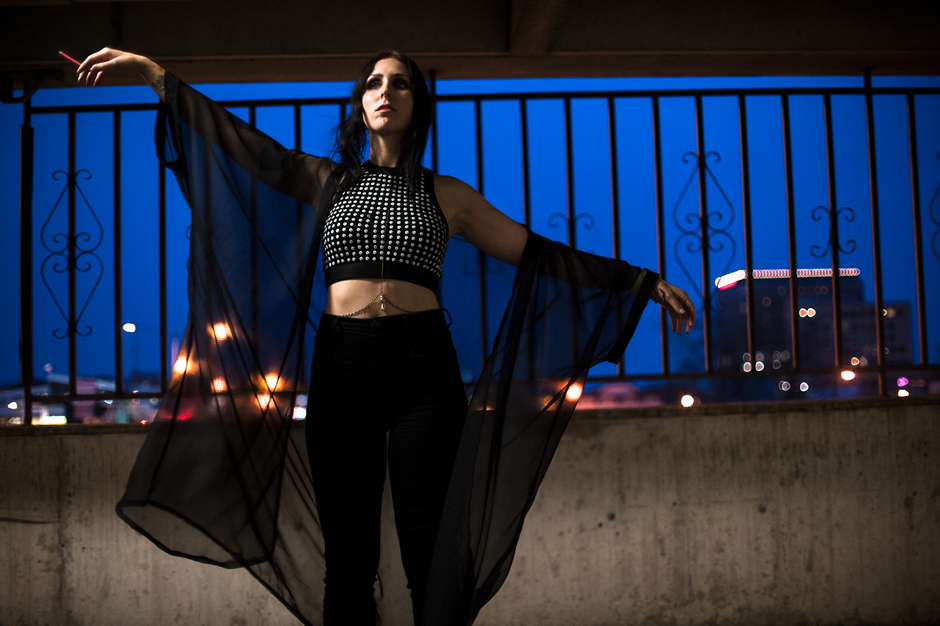 Oh my God, I never vomit. 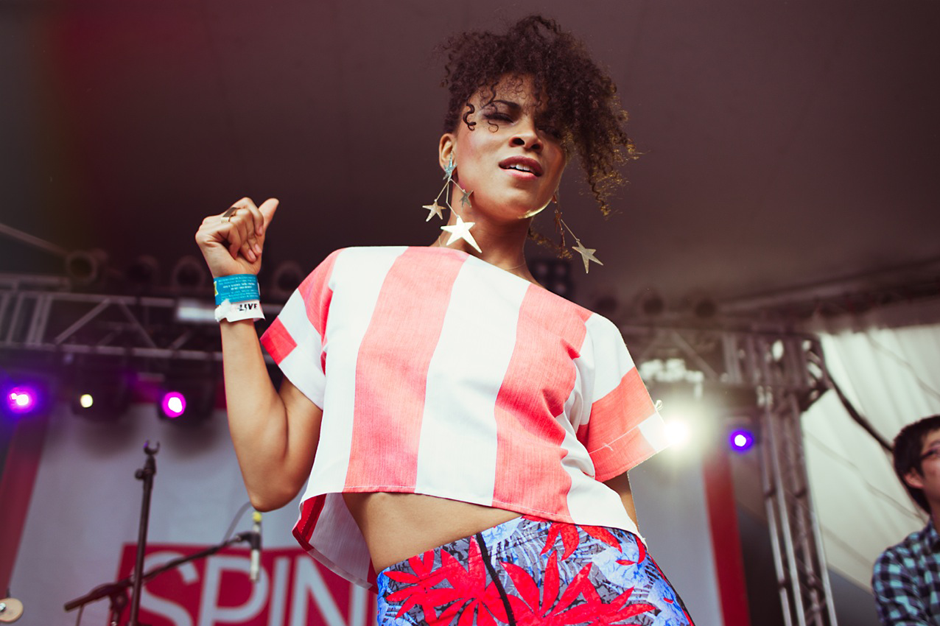 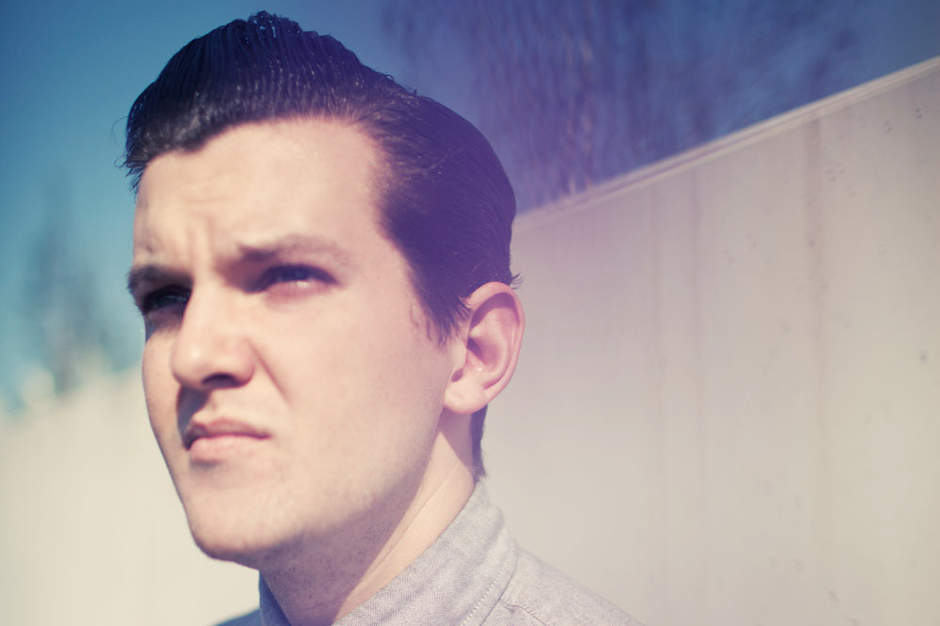 Oh my God I have the best [story]. I was at my friend Conway's house. I think I was 15, we were drinking wine and whiskey, just the worst stuff. Mixing everything together. I remember my friend had a bottle of wine really slowly and I was like, "No man you gotta drink it like this," and I ended up chugging the bottle of wine. He was like, "You know there is a cab coming in five minutes?" I think it was five girls in this van cab. I'm sitting in the back like swaying. I remember kind of just blacking out, not blacking out but falling asleep. I woke up and as I woke up I was throwing up on all these girls. I had my eyes closed and I remember hearing, "Oh my god he's throwing up on himself." My friend Dean goes like, "Yo dude, thanks, all the girls are sitting with me now. I love you." 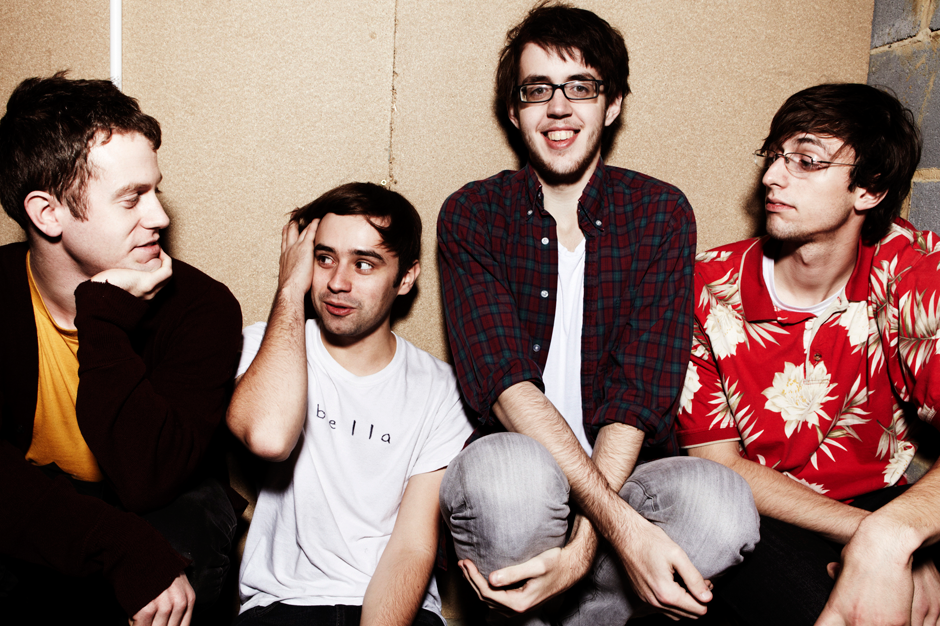 Dylan Baldi, frontman: Our bassist puked yesterday right before we played. He does that almost all the time. I don't know why he does that. It might be anxiety mixed with horrible, horrible stomach problems. 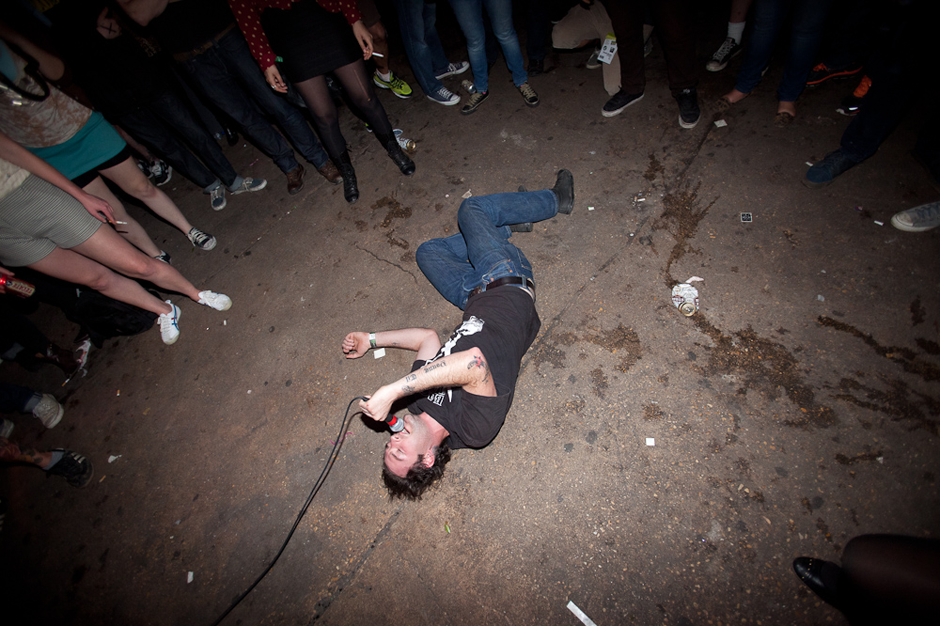 Ross Farrar, vocals: I puked the last time we were in New York. I was like walk-puking over some fence. We were at this bar and I just took a bad sip of beer that went down the wrong pipe and then just [puke sound]. When I puke it's from deep in my guts and sometimes I break a bunch of blood vessels in my eyes. 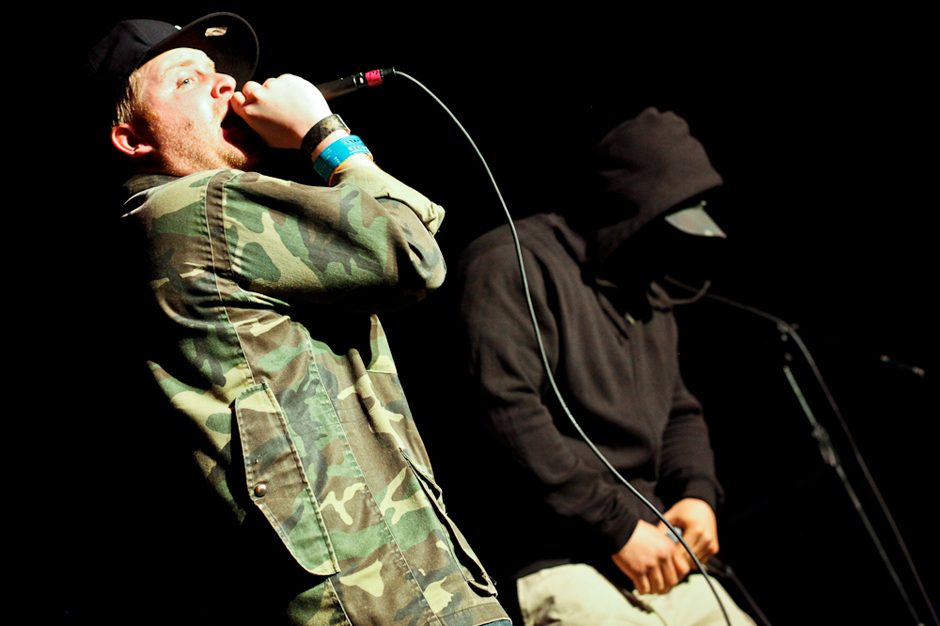 It must have been ten years ago. It was from some bad chicken. I don't puke when I drink. I can't do it. I have envy of people who can do that. It never happened for me. There's still hope. 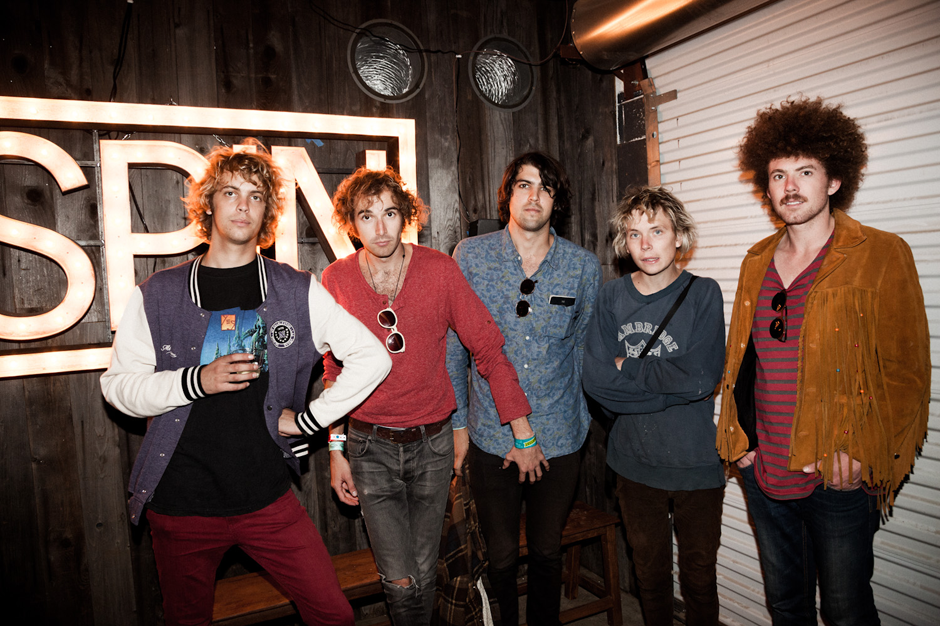 Cameron Avery: I threw up in Jamie's sink the other — a couple of weeks ago, yeah.
Jamie Terry: Left all the chunky bits in there. I was pulling them out with my fucking hand.
Jay Watson: Swimming pool, underwater. A few weeks ago and it was like four in the morning. I didn't want any of other people that were in there to see it, so I am over there hiding it with my body trying to scoop the chunks out. I was swimming on the bottom of the pool, that's when [puke sound].
Avery: We have this hot sauce called Ghost Pepper. It's like hottest shit I ever had. He had a little spoonful, he was really drunk. And then he lost his shit for about an hour. Jumped in the swimming pool and was like cruising around with his mouth open trying to cool it off. But the next day our pool was green and shit so I think it was on the way there before this. 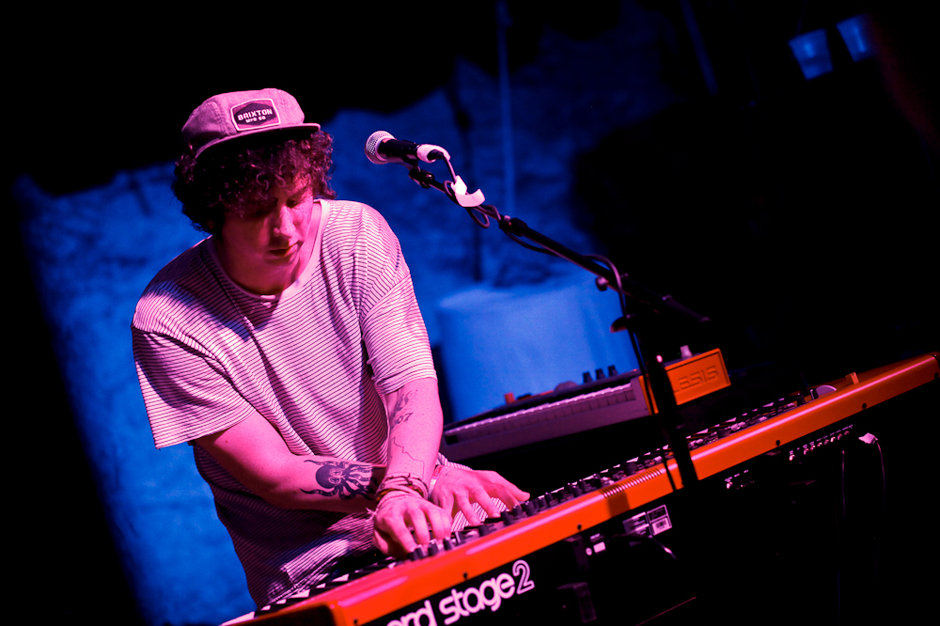 Yesterday! South By started catching up with me and I was feeling sick. So yesterday I showed up to the Brooklyn Vegan showcase and didn't get any sleep. I threw up down some alley and then I played the show. I'm happy to answer that question!