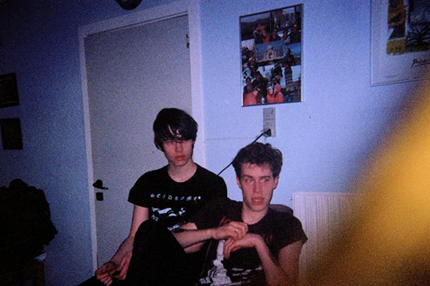 “We just woke up one day and decided to film a video,” says Elias Bender Rønnenfelt, one-half of Danish post-punk project War. “We didn’t know what to do or what to film. So we drove away as fast as we could until we found something that seemed good.”

Where Rønnenfelt and collaborator Loke Rahbek landed was Brøndby, a sort of suburb to their native Copenhagen and languid setting to self-directed visual below for “Brodermordet,” a four-track house cut and underwater B-side to their forthcoming At War for Youth 7”. Rønnenfelt (who also fronts Iceage) and Rahbek (frontman for Sexdrome who also co-runs the Danish label Posh Isolation) started working together two years ago, sneaking out of school on Thursdays to work on songs in Rahbek’s nearby rehearsal space.

“It feels like a distant world in the sense that none of us have ever really been part of a club scene,” Rahbek says of “Brodermordet,” which also doubles as a comment on fratricide as inspired by the story of Cain and Abel. “The idea was to make something that sounds like standing outside of the club while music is playing inside.” It’s due February 21 from Sacred Bones, with more music from War still to come.