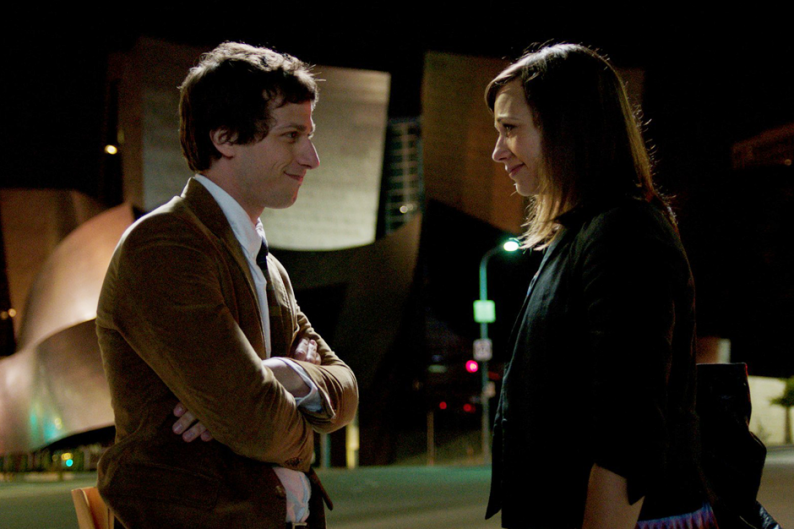 Heat, the Sundance buzzword invoked on behalf of any film attracting buyers and bidding wars, didn’t seem appropriate yesterday thanks to the friggin’ blizzard in Park City, but there was still no shortage of it. Celeste and Jesse Forever drew a huge crowd, including former SNL cast member and current Enlightened/New Girl costar Michaela Watkins, and it was great to see Rashida Jones promoting a movie that she cowrote and starred in and which she described as a professional “pinnacle.” Jones is lovable as Ann on Parks and Recreation, but her role is so undefined that she often fades into the scenery. On film, she often gets to be the girlfriend of the funny guy — cool enough to get the jokes, but rarely to make them (see: I Love You, Man). Presumably she had no choice but to write a decent part for herself, and it’s an auspicious if far from perfect debut. Jones and Andy Samberg play the title characters, separated exes who befuddle their friends (Ari Graynor among them) by remaining extremely close after ending their six-year marriage. Strangely, this sounds like it should have and would have been done a million times before, but actually, the idea to approach a former relationship without bitterness isn’t all that common, at least on film. The frustration of not being able to be with the person one considers his or her best friend is a finer, more sophisticated emotion and possibly, in the end, more relatable. As Samberg said after the screening, “Who hasn’t had a long, meaningful relationship with someone else before being with the person you’re meant to be with? I have.” Yeah, and the teariness of the audience suggested he wasn’t alone.

Of course, Celeste and Jesse’s maturity only lasts so long and it’s when they move beyond a shared loved of “masturbating” small objects like Vaseline tubes (a quirk that Jones borrowed from her own repertoire) that both they and the film run into trouble. Samberg, for all his viral likability, is not especially suited to a dramatic role. Even he admitted that it took some getting used to “feeling like he wasn’t supposed to be funny,” although he added that “it was cool not to be rapping or wearing a bird suit.” (There is a little bit of rapping, actually). He never looked totally comfortable, though, and when asked what drew him to the project, he naturally deflected with a joke: “I just did it for the paycheck. Peace out, you indie freaks.”

Jones has more to work with. Her character cycles through a believable range of emotions, at one point throwing herself into her job as a trend forecaster by re-branding a pop brat (Emma Roberts) alongside her gay work husband (Elijah Wood). Her mixed reactions to Jesse sometimes translate abruptly, but there’s never any doubt that these two belong together, and maybe there should have been more doubt. Also, minor point, but what’s with picking Ari Graynor for the chide-y marrying kind, both here and in last year’s What’s Your Number? She has too much comic potential for that and it’s too soon for her to already break with the lushier, single stereotype she established for herself in Nick & Norah’s Infinite Playlist. Anyway, this feels very much like a first film — disjointed, but earnest. There’s a sense that it comes from a very honest place and that everyone involved was trying something new — Wood was awkwardly questioned about how he found his inner gay, but he politely deferred to the script. Anyway, it was worth watching just to see Jones finally get the chance to express herself.

For Ellen is a harder film to define. Mainly, it’s a showcase for Paul Dano (There Will Be Blood, Little Miss Sunshine), who plays Joby, a middling musician about to lose custody of his five-year-old daughter. Working from a scant, 70-page script, Dano’s performance is all about the interstitials — the cigarette breaks, the guitar-noodling, and the one-sided cell phone calls he makes to his bandmate, his lawyer (Napoleon Dynamite’s Jon Heder) and his ex-wife. (It was too solitary for some of the audience, several of whom walked out.) At first, Joby comes off like a feckless, but not indecent guy — that is, until you realize he’s one of those deadbeat dads who doesn’t pay child support and never visits his daughter, but still thinks he has a God-given right to her.

This may sound similar to our compliant from yesterday regarding This Must Be the Place, but Dano is so impeccably styled (he and director So Yong Kim chose the clothes for the character during a trip to New York) and prone to such mesmerizing rock star mimicry as he dances around his hotel room that we craved his stage presence. The closest we get is an extended scene that almost couldn’t happen: On the dance floor of an empty dive bar, Dano breaks out choreographed, practically rapturous moves to Whitesnakes’ “Still of the Night” and there’s a glimpse of the frontman he might be. Anyway, clearing the song became a problem so this not exactly pivotal, but engaging moment took place on the very last day of the shoot. Dano tapped into his love for AC/DC and GN’R while imaging Joby, but he said it was driving around L.A. and listening to Buckcherry for the first time that made him finally understand what kind of musician Joby might be or like. Anyway, For Ellen is an acquired taste, but a slow, beautiful movie — a National song plays during the credits so you get the picture.

Speaking of acquired tastes: The Comedy. Fewer people walked out of Rick Alverson’s deliberately controversial film, which was totally shocking. Tim Heidecker stars as Swanson, a truly contemptible Williamsburg hipster about to inherit his dying father’s estate. He dons blue Wayfarers and sits by his dad’s deathbed, badgering the male nurse with details of prolapsed anuses. He tells his female coworker that he “rapes everything” and watches idly when she later has a seizure. He says Hitler minus the Holocaust wasn’t so bad after all. He and his beer-bellied friends, including Eric Wareheim and LCD Soundsystem’s James Murphy, play ironic games of wiffle ball, harass cab drivers, and blow out the prayer candles at a Catholic church. Swanson buys a beer at a predominantly African-American bar and warns him to diversify, telling him that people like Swanson need to safe in a place like this in order for it to succeed. In scene after scene, Alverson and this gang attempt to be as alienating as possible.

So, yeah, The Comedy could attract heat of a different kind and don’t make the mistake, like one female audience member did, of wondering why it’s called what it is when the material is borderline nihilistic. “Ever hear of the term ‘irony’?” Heidecker shot back from the stage after the screening. Alverson said he was prompted to make this movie after so many years of seeing “Hipsters in Williamsburg who shouldn’t live there anymore.” And Heidecker added, “It’s very much intended to make you feel uncomfortable.” Well, duh. The question is: Is that an arrogant pursuit? Are these guys actually going to make you squirm with their fearless vulgarity, or will it be an absolute bore? One thing is for sure: Hipsters will probably love it! Definitely check back tomorrow for our interview with this cast and more.