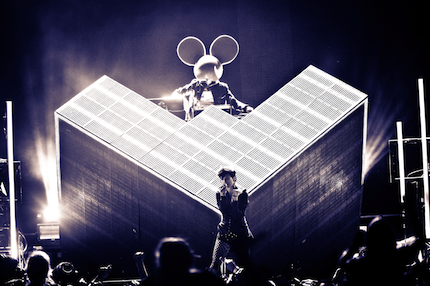 Joel Thomas Zimmerman begins the year looking down from rarefied heights. Better known as Deadmau5, the electronic dance musician had his own day declared in Las Vegas and was, along with Skrillex and Avicii, a major subject of a piece on EDM in the tony New Yorker. Sure, he did take 12 minutes to rant on YouTube about what he saw as the flaws of Miami’s Ultra Music Festival, but now he has taken to social media again to share a slow-building new track.

Seemingly a sequel to the 2011 self-titled album’s “Cthulhu Sleeps,” “Cthulhu Dreams” ventures into vaguely sinister synths and its predecessor track’s clock-like ticking before settling into pounding four-on-the-floor aggression. “so, i made an angry song,’ DeadMau5 explained via Facebook. “cthulhu’s been sleeping for a while, so i woke him up… just a small iteration of the track i love so much.” When Cthulhu wakes up, all hell breaks loose.