Look! We made you an awesome mixtape! Featuring M83, the Rapture, and, of course, Adele. 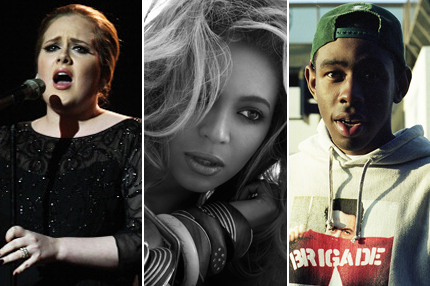 19. ERIC CHURCH, “Homeboy”
The gut-ripping, country-rock saga of a small-town family hysterically projecting their fears onto a lone Yelawolf fan with a neck tat. Unfair, but plausible.

16. BRAD PAISLEY, FEAT. CARRIE UNDERWOOD, “Remind Me”
Treating marriage’s dying passion like an apocalyptic event — which it is — Paisley launches a melodic warhead that Underwood rides like Slim Pickens in a print dress and spray tan. Sizzle-lean guitar solo, too.

14. THE WEEKND, “Wicked Games”
Pop culture’s treatment of women as literal chickens in a neon-lit, two-drink-minimum “VIP” coop comes home to roost on this stupefying R&B creepfest. Alternate title: “Only Happy When I Make It Rain.”

13. BRITNEY SPEARS, “Till the World Ends”
Team Britney unleashes the electro-house hounds on TMZ’s hater brigades and she emerges from the fray, extensions askew, with exactly one pound of flesh!

12. M83, “Midnight City”; COLLEGE, FEAT. ELECTRIC YOUTH, “A Real Hero”
Ah, the ’80s, the last decade when we were willfully naive enough to expect technology to ravage us gently. And our childlike delusions sounded just like this — Korg synths set to “stunned.”

10. TV ON THE RADIO, “You”
Perhaps it got eclipsed in the pall cast by bassist ?Gerard Smith’s tragic death, but this is TVOTR’s loveliest recorded moment.

8. LYKKE LI, “Get Some”
The Swedish synth-pop Darla suddenly decides to shimmy and gyrate like a polyrhythmic cult leader. Don’t blame us if you wake up in a puddle surrounded by candles and John the Conqueror root.

6. TYLER, THE CREATOR, “Yonkers”
Older rappers should be baffled, appalled, and frightened — that horror-flick synth loop is the sound of your style being repeatedly stabbed to death.

5. FRANK OCEAN, “Novacane”
Imagine, if you will, a fully evolved Drake song, where you’re slyly immersed in youthful, aww-shit decadence, while simultaneously watching your dreams of recreational stripper booty and complimentary cocaine breakfasts get methodically dismantled.

4. THE RAPTURE, “How Deep Is Your Love”
The closest pop music got to real church in 2011. Still waiting for the Tony Humphries, Club Zanzibar, New Jerseyï¿½style, ’80s house remix with spine-tingling, MLK “I Have a Dream” breakdown.

3. EMA, “California”
EMA dubbed her signature song a “rap ballad” and she performs it like a time-lapse corner-boy soliloquy, squinting through a 3 a.m. hangover haze, theatrically summoning Tupac’s out-on-bail-fresh-outta-jail compulsion as much as PJ Harvey’s mystical swagger. No California love here, though, homie.

2. BEYONCÉ, “Countdown”
The sort of aggressively and joyously avant pop production that rearranges your sense of time and space with an effortless hair flip (which is obviously the product of Olympian training and skill). “Countdown” is Beyoncé’s gangsta throwdown as an artiste, bumping and grinding and skipping and skating and caressing and catcalling and bearing witness all over the beat like nobody since MJ — full stop. The Afro brass blasts, the minimalist synth boop boop, the jazzy Boyz II Men breakdown, the syncopated shiftiness back-to-front. A masterpiece, with legs for days.

1. ADELE, “Rolling in the Deep”
The young Ms. Adkins’ ex-b’friend is transformed into the accursed Jericho and she’s the Israelites blowing his shit apart with the wind of a higher power at her back, a.k.a. cowriter-producer Paul Epworth’s holy-moly arrangement, a meticulous groundswell that left cubicles quaking not weeping. All together, now, children: “Fuuuck that dude!”