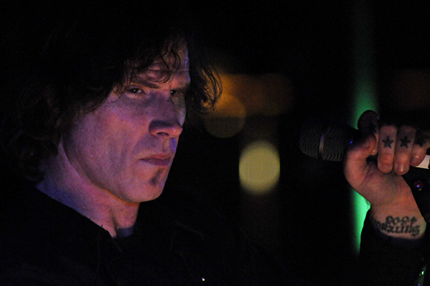 It’s been seven years since Mark Lanegan released an album without the aid of Isobel Campbell, but that long stretch of not hearing Lanegan’s moonshine-drenched voice in a solo setting will end February 7 when the former Screaming Trees singer unleashes his Blues Funeral. Funeral’s opening track, appropriately, is “The Gravedigger’s Song,” which Lanegan unveiled earlier today.

Lanegan’s ’90s solo albums were bluesy, forlorn affairs steeped in the rainy grey ambiance of the Pacific Northwest, but for his second album under the moniker “Mark Lanegan Band,” he trades in his one-man-growling-in-the-studio motif for a full-flavored sound similar to the bands he’s buds with, namely Queens of the Stone Age and the Gutter Twins. In fact, Josh Homme, Greg Dulli, and former Peppers/Pearl Jam drummer Jack Irons all appear throughout Blues Funeral’s 12 tracks.

Lanegan might have changed his musical style, but his gloomy lyrics are as feel-good as ever: “Love is a medicine, girl, like a crow flying eight miles high over wire and wood,” he sings on “Gravedigger’s.” The NBA lockout really took its toll on this diehard Los Angeles Clippers fan. Check it: