Your favorite indie-rock twins remind you to iron! 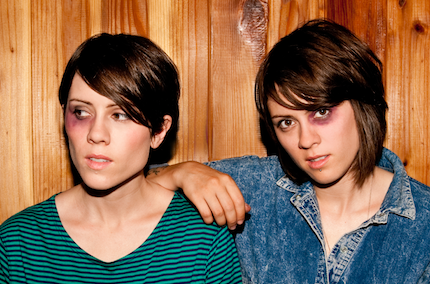 Tegan and Sara have been touring nearly half their lives — they started shortly after graduating from high school in 1998 — so it makes sense that the indie-rock sister act’s latest project is a CD/DVD set that chronicles life on the road. On November 15, the duo will release Get Along, a four-disc package that includes tour documentaries States (which touches on the band’s early days) and India (which traces the pair’s trip to the country last year). The package also features For the Most Part, a 2010 concert film shot in Vancouver, and a 15-track recording from the gig.

“When I look at the volume of shit we’ve done, it can be daunting,” says Sara Quin, who’s currently writing songs for the band’s seventh LP. “But I can see what we’ve accomplished in a real way. In a weird way, Get Along allows us to put a cap on our past; there’s a checkmark-y, completing feeling, like, okay, that was that decade. And now we’re going to start fresh.”

In the spirit of looking back — and the tour-heavy Get Along — Sara provided SPIN with five tips for surviving life on the road:

Take the Bus
“When it comes to touring, Tegan and I are sluts. Not physically, like we have sex with a lot of people, but we’ve ‘done it’ with every travel vehicle you can imagine: a Greyhound, a car, a minivan, a 15-passenger van with a trailer. Once we got our own bus, I really started to commit to my career. Which sounds absurd, because we’d been touring for six years at that point. But pre-bus, I was always one foot out the door, thinking, ‘This is crazy, how much longer can I do this? I’ll be 1,000 by the time I’m 25.’ Then we turned 25 and got a tour bus and I was like, ‘I can definitely do this.’ “

Keep It Clean
“If you’re going to live on a bus RV with 10 grownup men 200 days a year, shit has to run strict. Good thing Tegan and I are obsessively clean and organized. You’d think we were raised in the military. If your belonging isn’t where it belongs, it goes into what we call lost and found, which is the garbage.”

Be a Party Pooper
“I know there are artists who can put on a fantastic show drunk, or with acid in their headband, but that doesn’t happen on the OCD bus. We even have a no-hard-liquor-on-the-bus policy. I’m outing us as giant nerds, but Tegan and I give our best performances when we’re sober and sleeping well. But we’re not the most un-fun people alive: Every once in a while we’ll dip into a drink or four before the show. We enjoy the occasional hangover.”

Go to the Dentist
“There were a lot of years where taking days off wasn’t a priority — it was all about momentum, and I almost got addicted to being on the road. But part of survival on the road is having a plentiful home life. Sometimes I worry obsessively that people won’t be able to relate to me and Tegan, but we’ve stayed ‘normal’ because we’re surrounded by normal people. We go home, have plans, pay taxes, go to the dentist…you have to live like a regular human to write about life.”

Iron!
“A couple years ago, someone said to me, ‘I can’t believe you don’t iron your clothes, and that you have a suitcase instead of a garment bag.’ I was like, ‘Who has a fucking iron and a garment bag?’ Now, the iron is my best friend. I even iron my T-shirts! Let’s say you’re in Hamburg, Germany, and you have to drag your suitcase up a cobblestone mountain and squeeze into a hotel room with eight guys and everyone’s showering and it’s all steamy and your clothes are all gross and ragged…you just pop out the iron and stiffen up your shirt and pants, and you feel like a million bucks. All those years I spent wearing hole-y jeans and a hoodie…I looked like a hobo. Now that I’m 31, I’m trying to dress like a grownup. My grandmother was a very well-dressed, put-together woman, and I feel like I’m channeling her on a daily basis.”