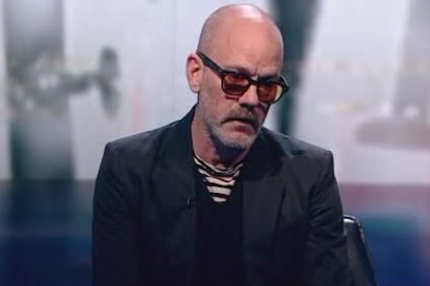 Don’t count on an R.E.M. cash-in reunion tour a decade from now. The alternative rock trailblazers will not be getting back together, Michael Stipe told British TV on Wednesday night. “It’s over,” Stipe said of the band’s split. “It’s done.”

There will be no R.E.M. equivalent to the Eagles’ Hell Freezes Over rapprochement, the Athens, Georgia-based band’s former frontman confirmed, calling the decision “bittersweet” and “strangely liberating.” Appearing on BBC political show Newsnight, Stipe and former R.E.M. bassist Mike Mills also discussed their reasons for the breakup and their feelings on contemporary politics.

Asked why R.E.M. chose not just to get back together every few years, as the Rolling Stones and other bands do, Mills explained, “It was an opportunity for us to walk away on our own terms … There are no external forces making us do this. We have no problems. We can walk away as friends and feel like we’ve accomplished everything we wanted to accomplish.”

In addition, Stipe and Mills weighed in on the recent Occupy Wall Street protests. Asked if they were “fans” of the demonstrations, the two former R.E.M. members replied, almost in unison, “Absolutely!” Man, these guys are so in sync — they should form a band together.