Cory Smoot, a.k.a. Flattus Maximus, was found Thursday morning as the metal band prepared to cross the Canadian border 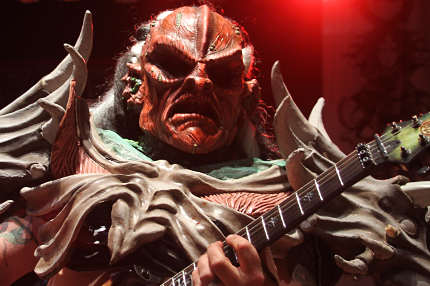 Cory Smoot, a.k.a. Flattus Maximus, the longtime guitarist for Richmond, Virginia, metal band GWAR, was discovered dead by his bandmates on Thursday morning as the six-piece prepared to cross the border into Canada on tour. No cause of death has yet been identified; a spokesperson was unavailable for comment as of press time.

“It is with a sense of profound loss and tragedy that the members of GWAR must announce the passing of their long time guitarist and beloved friend Cory Smoot… The members of GWAR are completely shocked and devastated… At this point there is no word on arrangements and the disposition of the remainder of GWAR’s current North American tour, nor are there any details regarding long term plans.At this point we are just dealing with the loss of our dear friend and brother, one of the most talented guitar players in metal today. We ask that our fans and the media be respectful of our request for privacy for those that have suffered this terrible loss. A full statement will be coming in the next day or so, in the meantime please give your thoughts and your prayers to Cory, his family, and all the people that love him.”

Smoot joined GWAR in 2002, nearly 20 years after the band’s original formation in ’84. He co-produced GWAR’s 2006 effort Beyond Hell and its follow up Lust In Space, and was the longest serving member to portray the Flattus Maximus character in the band’s history.

In 2009, SPIN visited GWAR’s Richmond HQ. Go for a video tour you can watch here. The band’s current trek also made our list of 30 Best Fall Tours this year.