First Spin: The Tales Behind Pterodactyl’s ‘Spills Out’ 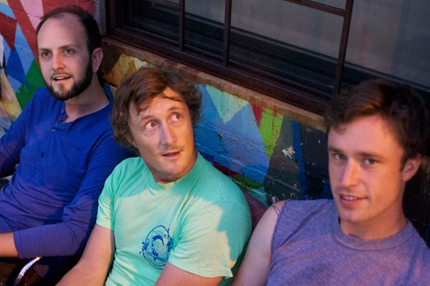 On November 15, Brooklyn art-rock brohams Pterodactyl will uncage Spills Out, their finest and most deliciously schizophrenic full-length to date. Check out the album in its pinballing entirety while reading choice words from guitarist/vocalist Joe Kremer on a few of his favorite songs on the disc:

“The Break”
“This one is very, very directly about leaving my job and embracing this, like, surf song thing with open arms. It’s the song that fits in that sort of history, just because surfing is what I imagine when I think of being totally free. I was a physics teacher for a long-ass time. I was good at my job and I worked really hard at it. You can always do more to make it better and music works the same way, but basically, looking to my job to validate myself was a source of constant stress, where with surfing I know I’m not very good at it. And for me it’s more of a matter of just sitting out there trying to like get up on a wave now and then and falling off that just absolutely has to be okay. But it’s just like the main reasons for quitting my job was to give myself time to kind of take everything in and collect myself. I was thinking when I first stopped working like, ‘Oh I’ll just do this for awhile. I’ll get good and feeling good and I’ll go back to like doing things the way I used to do them and feel good.’ And that’s definitely not how it’s gone down, but I’ve definitely like made the message of that song more relevant.”

“Zombies”
“The moment we played it for the first time together it was just like cohesive and awesome and we all thought it was a song already. We spent months trying to figure out who had written this song that we had started playing in practice, but we ended up deciding no one had written it yet so we just went ahead and wrote it. A friend of ours from college died last year in a hit and run accident. He was just walking across the street on McGuinness in Greenpoint and was hit by a car at like 2 or 3 in the morning. This was like really big event for both of us, but Matt [Marlin] had seen him earlier that night and that made a big, big impact on him. He went into the process of writing this record, not fully realizing maybe, but wanting to write a song for Neil and that goal got caught up in the process of writing ‘Zombies,’ but it was just sort of too much for that song to take on. So it ended up not being about that, and ‘The Whole Night’ ended up taking on that meaning. But ‘Zombie’ went through so many identities. Trying to fit all these pieces together was a real tough one.”

“School Glue”
“I think it fits nicely with the Pterodactyl canon. ‘School Glue’ just sort of rolls off the tongue with the stuff we’ve been doing forever. We struggled for a while because the sound in the beginning of the song is this shitty plastic toy keyboard that folds in half. It’s called the Kawasaki Dual-Coolkeys. On tour, we were like, ‘If we’re going to travel with a little toy keyboard we better have a spare.’ And both of them were broken by the end of that trip [to SXSW]. So we decided that was unfortunately not a viable instrument for our group. It’s not the same kind of quirky weird about to fall apart sound of the toy, but it’s just like in all the songs censors it and it’s something that sounds pretty classic. But it’s trying to come to terms with sticky, bland, day-to-day stuff. So at the end of the song it turns it around, ‘Hey, it’s not so bad. This stuff is essential to life.’ Matt came up with the outro line, ‘House paint, school glue, how safe are you?’ Which I think tries to throw like a monkey wrench into the ‘everything’s okay in the end’ conclusion. Makes it really, really biting, though it depends on your reading of it.”

Also of note, this recent Panopticon session with Pterodactyl:

The xx Share the Secrets Behind the Songs on ‘Coexist’