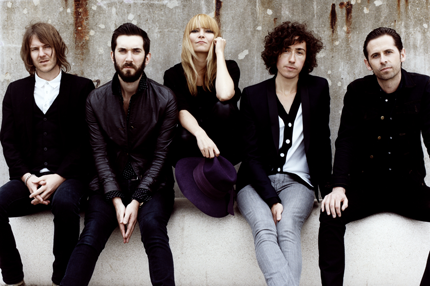 “It’s a bit like being an impressionist: You paint and re-paint and go back to the same spot, just to look at it in different light.” That’s Liela Moss, frontwoman for the Duke Spirit, speaking on the very studied approach her band took to recording their latest LP, Bruiser, due digitally this week.

Written and recorded over the past year, the London band’s third LP is a muscular yet elegant offering that almost sounded completely different from what you’ll hear below via SPIN’s exclusive debut. The group opted to record as a quartet after the departure of guitarist Dan Higgins and put in time with producer Richard File (formerly of U.N.K.L.E.) whose outside influence and dance background had a considerable effect. “We found ourselves working to a grid, putting things down metronomically,” Moss says. “Bass and drums so tight you could chop them on a computer.”

They wound up scrapping that work, but didn’t ditch their new rhythmic education. “We learned so much but it just didn’t suit us,” Moss laughs. “I think on this record you get plenty of time to hear that more delicate side of us and yet, if there was too much of that I would worry that the record was extraordinarily slow. It’s not — there’s more depth but you still get some abrasive moments as well. All of this is a lot like trying on different outfits, too. Sometime all the pieces don’t work together, but you can still find ways to keep those pieces you want. In this case, it was like ‘We’ll keep the jacket.’ ” Spoken like a true muse of the late Alexander McQueen.