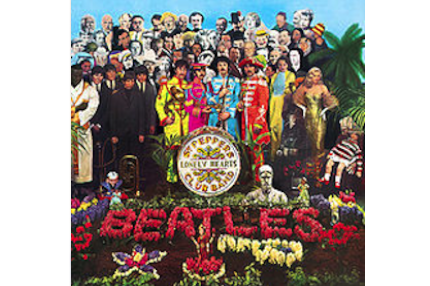 Why would you want to own a record with a bunch of label honchos on the cover? We can think of about 70,000 reasons. An adapted sleeve for the Beatles’ Sgt. Pepper’s Lonely Hearts Club Band that puts the faces of Capitol Records executives on the Fab Four members is worth roughly £70,000, or almost $112,000, according to Record Collector magazine. The artwork tops the magazine’s list of the rarest album covers, the BBC reports.

Only about 100 copies of the Capitol-exec Sgt. Pepper’s sleeve are reportedly believed to exist. The artwork was made ahead of Christmas 1967 to commemorate the success of the album, which came out in June. Sir Peter Blake designed the original Sgt. Pepper’s collage, but the article doesn’t specify who made these ultra-rare alterations.

Five other Beatles records landed in Record Collector’s Top 10, led by the first 10 numbered copies of 1968’s self-titled double-LP, “The White Album,” which came in second place at a £7,000 value, or almost $11,200. Andy Warhol reportedly nabbed the next spot, with his covers for 1953 Spanish lesson disc Madrigals’ Magic Key to Spanish Volumes 1 and 2 (£3,500, or $5,600) and 1951 spoken-word album The Nation’s Nightmare (£3,000, or $4800). Close behind was 1964 U.S.-released compilation Jolly What! England’s Greatest Recording Stars: The Beatles and Frank Ifield on Stage, with songs by the Beatles and easy-listening singer Ifield (also £3,000). That early-1990s pog collection, however, remains worthless.