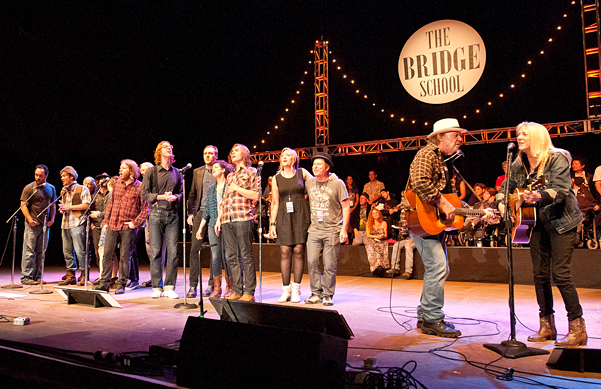 Neil Young's annual Bridge School Benefit — a two-day concert that raises funds to help teach students with severe learning and communication challenges — celebrated its 25th anniversary this weekend at San Francisco's Shoreline Amphitheatre, and music's elite came out to help: Arcade Fire, Eddie Vedder, Beck, Foo Fighters, Tony Bennett, Norah Jones, Mumford & Sons, Devendra Banhart, and others all performed to more than 45,000 fans over two days. And, of course, Young and his wife Pegi joined for a few songs. Neil rocked out with many of the performers, and led a sing-along of the Youngbloods' classic "Get Together."

See photos and read about each performer's set right now!.

Neil Young's annual Bridge School Benefit — a two-day concert that raises funds to help teach students with severe learning and communication challenges — celebrated its 25th anniversary this weekend at San Francisco's Shoreline Amphitheatre, and music's elite came out to help: Arcade Fire, Eddie Vedder, Beck, Foo Fighters, Tony Bennett, Norah Jones, Mumford & Sons, Devendra Banhart, and others all performed to more than 45,000 fans over two days. And, of course, Young and his wife Pegi joined for a few songs. Neil rocked out with many of the performers, and led a sing-along of the Youngbloods' classic "Get Together."

See photos and read about each performer's set right now!. 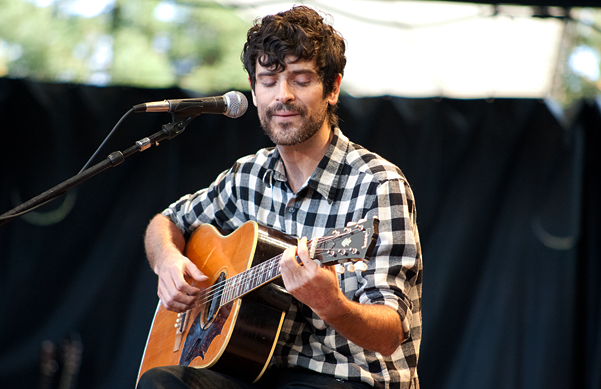 Following a two-song intro from host Neil Young ("I Am a Child" and a cover of the Youngbloods' "Get Together" with help from Pegi), Devendra Banhart gave the 25th edition of the Bridge School Benefit a gentle solo-acoustic opening. The bilingual set opened with a cover of "Tell Me What Is True Love" by the late influential British songwriter Bert Jansch, Banhart's friend who joined him onstage at the Bridge School show in 2006. Banhart was a last-minute addition after Jenny Lewis and Diana Krall were forced to pull out.

4. Norah Jones and the Little Willies 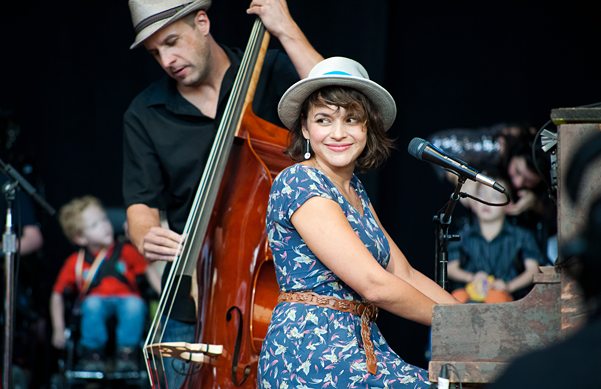 Like Banhart, Norah Jones was a surprise addition to the bill, and like Banhart, she's been here before. But for her third Bridge School appearance, she brought along her country partners the Little Willies and shared vocal duties with Richard Julian. The playful set included a pair of Hank Williams covers, Dolly Parton's "Jolene," and "Lou Reed," a song about seeing the Velvet Underground rocker tipping cows in Texas. 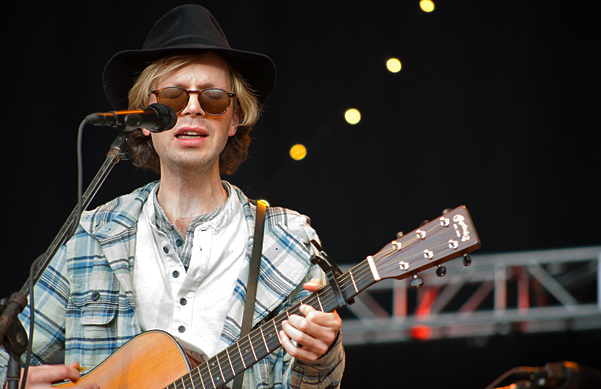 Performing for the first time in 10 years with the musicians that helped him record Sea Change, Beck kept the beginning of his set focused on that LP's melancholy tunes like "Golden Age," "End of the Day" and "Lost Cause." But things turned celebratory when he thanked Neil Young for helping him early in his career, then handed his son Cosimo a tambourine and launched into Young's "Pocahontas." The sold-out Shoreline crowd was elated when Young himself came out to assist on vocals, but the party truly began when Beck and his band busted out "Where It's At," sans the turntables, but played with enough energy to get most of the audience clapping along with the 1996 hit. 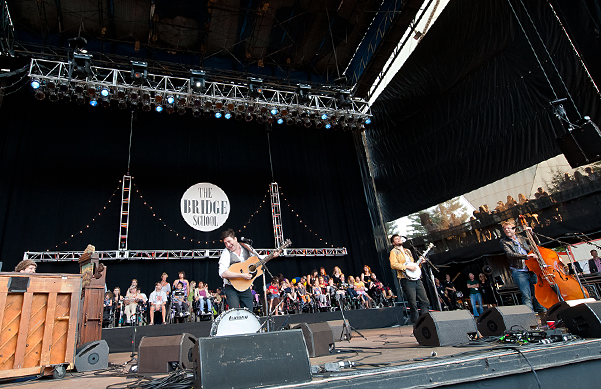 English quartet Mumford & Sons quickly got the audience riled up with their rousing, rollicking folk-pop, playing songs like "Roll Away the Stone" from their hit debut album, Sigh No More. The band's cover of "Dance, Dance, Dance" brought out Young, who assisted on vocals, harmonica, and guitar. Sarah Neufeld and Marika Shaw from Arcade Fire then came out to play violins on "Awake My Soul." Frontman Marcus Mumford played a mean bass drum throughout the set, which closed with a fiery take on "The Cave." 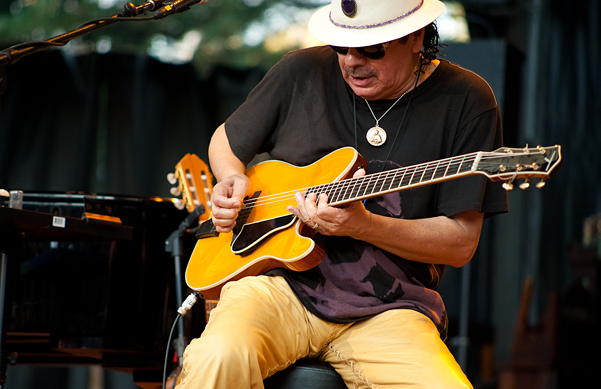 Los Invisibles, led by Carlos Santana and his new drummer wife Cindy Blackman, gave the proceedings a couple of curve balls, offering the first electric guitar of the day and adding some salsa to a plate filled predominantly with rock and folk. In addition to solos from both Santanas, Carlos brought out Dave Matthews for their collaboration "Love of My Life." The set ended with a couple of Santana's best-known tunes, "Maria Maria" and "Smooth." 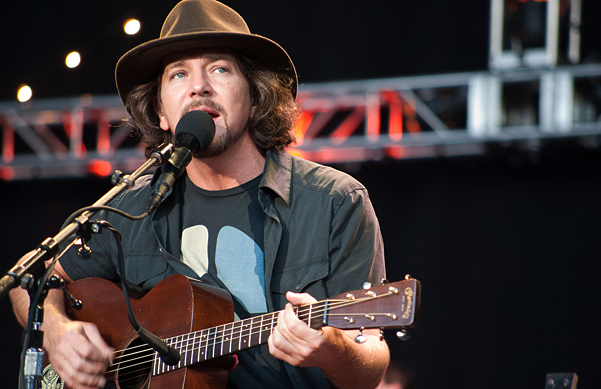 It's never good to apologize before you've even performed a song, but Eddie Vedder did it twice, first for dropping an F-bomb while talking about screwing up a Neil Young cover the night before, and then for cussing in front of the Bridge School kids. But the Pearl Jam frontman ended up turning in a pro set on Sunday night, opening with PJ's "Elderly Woman Behind the Counter in a Small Town" and the band's cover of "Last Kiss." He also dedicated a version of Little Steven's "I Am a Patriot" to all of the "99 percenters" in the audience. But it was Vedder's parade of guests towards the set's end that highlighted his show: First up was local boy Jerry Hannan, who wrote "Society" from the Into The Wild soundtrack. Next was Regine Chassange from Arcade Fire singing on the ukulele song "Tonight You Belong to Me," followed by Beck for "Sleepless Nights" (both from Vedder's Ukulele Songs). Finally, "Uncle Neil," as Vedder called him, came out to sing and play on "Don't Cry No Tears." How can you go wrong with the godfather of grunge playing with grunge's most enduring voice? 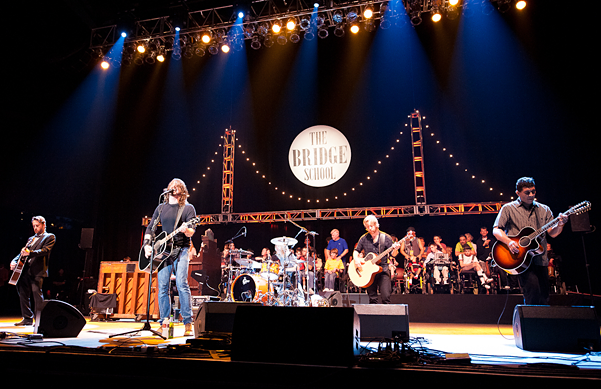 EdVed may be grunge's most enduring voice, but the award for Seattle's most resounding beat will always go to Dave Grohl. But, of course, it's now Taylor Hawkins hitting the skins for the Foo Fighters, who followed their two-and-a-half-hour set in Oakland four nights earlier with a relatively more subdued 30-minute showing on Sunday. But "relatively" is the key word there, since Grohl and Co. can still rock with the best of them, even when they're playing acoustic. The powerful set included "My Hero," and Wasting Light's "These Days" (which, in Oakland, Grohl said was his favorite song that he's written), and "Times Like These." Then Grohl was left on his own to raise the night's bar with an outstanding rendition of the amazing "Everlong." 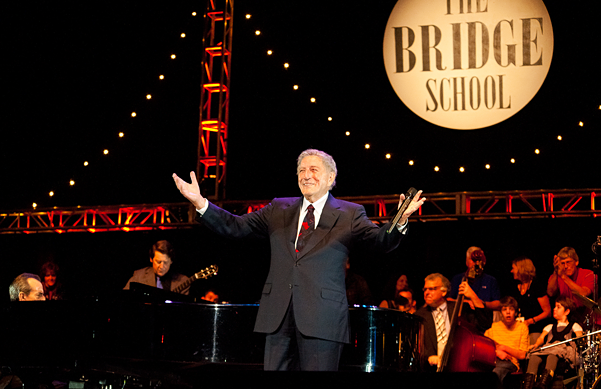 Everyone brings a touch of class to their Bridge School performances, but it's fair to say that Tony Bennett landed the knockout punch on Sunday when it came to being the consummate professional. With pipes from the heavens and a crack band decked out in suits, Bennett turned the cavernous Shoreline Amphitheatre into a swanky jazz lounge with tremendous renditions of "Just In Time," "I Wanna Be Around," and "Who's Got the Last Laugh Now?" Bennett dedicated "The Good Life" to Lady Gaga, and eventually gave the Bay Area crowd the gift it was waiting for, "I Left My Heart In San Francisco," and he was rewarded with a thunderous standing ovation. 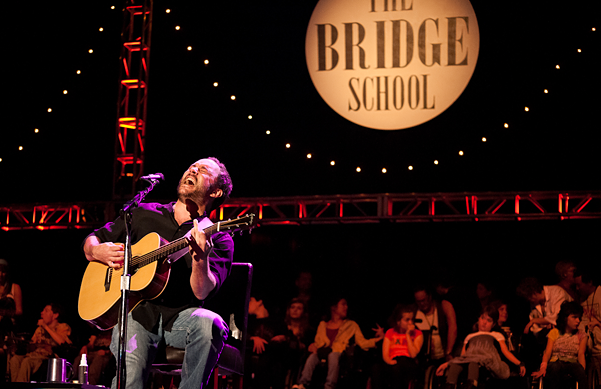 Though his name didn't appear on the official list of artists playing this year's Bridge School Benefit, Tim Reynolds was Dave Matthews' secret weapon on Sunday evening. Matthews' regular collaborator turned his guitar into a sound manipulator, which helped make songs like "Bartender," "Stay or Leave," and "You and Me" sound massive and grand. Marcus Mumford was invited onstage and the trio turned "All Along The Watchtower" into a rock'n'roll jamboree, and then Neil Young took the third spot to dig into a remake of "Oh! Susanna." 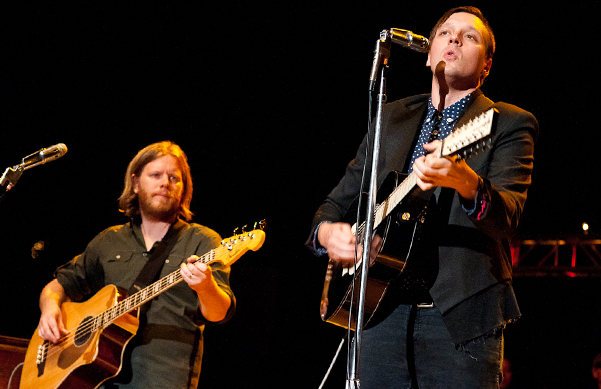 Arcade Fire frontman Win Butler joked that his band didn't have a hard time coming up with their set list since they don't have any hits to choose from, but the band still proved it deserved to have the penultimate spot on Sunday's bill. The epic tunes poured out starting with "Intervention" and ending with "Wake Up." In between they recruited Young for a cover of his "Helpless," and even played "Half Light II (No Celebration)" from their Grammy-winning The Suburbs due to its San Francisco connection. "There's no other place we'd rather be than right here, right now," Butler noted. Arcade Fire's performance backed up that proclamation. 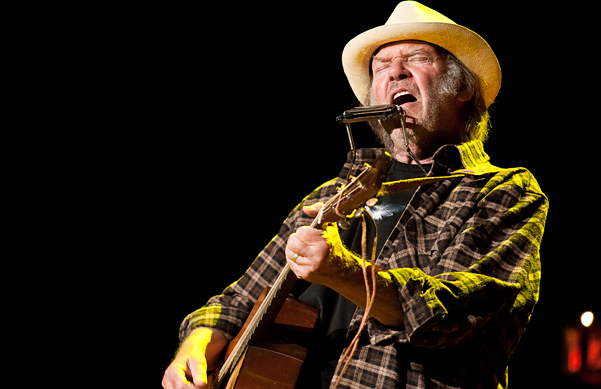 The 25th edition of the Bridge School Benefit ended the way it began nearly nine hours earlier — Neil and Pegi Young celebrated the school for disabled children that they helped establish and maintain (students from the school watched the show from the stage) and played '60s anthem "Get Together." The second version, which came at the end of Young's short three-song headlining set, included many of the artists who had performed earlier. The idea of smiling on your brother and loving each other was a fitting end to the night, as was Pegi's comment to the crowd that "Bridge School loves you."