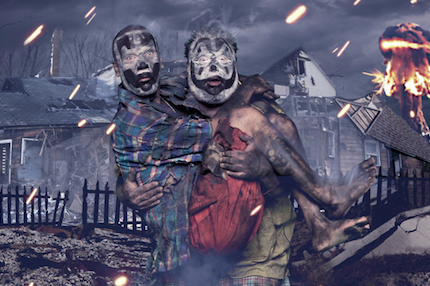 Halloween is obviously a very important time of year for the greasepainted gorehounds in the Insane Clown Posse. “Of course, it’s the only day of the year where we seem to make sense,” says Violent J. “We have a license to be us and not get as many stares and double takes. There is no holiday anything like Halloween. How is it OK to have a guy’s head stuck to your fence? You go to the doctor’s office, they got a Frankenstein with blood coming out of his head — really?”

Beyond their undying love for the haunted holiday, the duo always rocks Hallowicked, their annual October 31 homecoming show in Detroit, dousing their hometown faithful with gallons of sticky Faygo for 17 years running. To mark the occasion, we traded goodie bags with Violent J, avowed hip-hop geek and wicked shit historian, and learned about 11 of his favorite horrorcore classics, sure to juice your Halloween party playlist if you want something a little bloodier than Monster Mash. “Wicked shit, or horrorcore, is very near and dear to my heart, so I want to do it justice,” says J. “These are 11 really bomb-ass horrorcore songs. They’re not the best, they’re not the most influential. They’re 11 of my favorite, and that’s it.”

“Later in their career they went more toward gangster shit, more selling cocaine… but when they first came out in Flint they were straight wicked shit, straight horrorcore. Up in Flint, about an hour north of Detroit, I’d be bringing our cassettes up there to put ‘em on consignment in record stores. I’d go up there and ask, ‘What do you have locally from Flint?’ The Dayton Family was sold behind the glass, under the counter. It was like, this shit is the hottest shit in Flint. It’s so hot, it’s hard to keep your hands on it. It’s magic. They had an EP album, about five songs, and it’s called What’s on My Mind? What I ended up doing was trade the guy $150 worth of ICP cassettes and CDs for this one EP he had under the glass. He had one EP left and it was sold out everywhere. I remember putting it on on the way home and there it was, What’s on my mind is the muthafuckin murder. And it’s just so ruthless! The beat is so haunting and heavy, and they were singing straight wicked shit. I fell in love with it on that hour drive home. Of course they reprinted it on CD and years later now they’re on Psychopathic Records, yo. They were just magic to me, man.”

“Next on my list are guys that many people don’t consider horrorcore at all, but their first record is easily what I consider horrorcore. It was their EP. And before that they had an album called Faces of Death and it was all horrorcore. They did like a chant, almost like a Motown, harmonics, falsetto-type singing skit and under it is some wind blowing, and it’s this long song where all of them are singing in harmony, and they’re singing about the fuckin’ Ouija board, you know what I mean? Of course later they became huge famous and stopped doing the wicked shit, but I’ll always love ‘Ouija.’ “

“He’s from Covington, Georgia. I discovered him on a demo he sent in. He had a super Southern twang to his throat and he raps about being the scarecrow from the middle of nowhere, you know? Instead of coming from the city or coming from the ‘hood he comes from the boonies. He comes from the barn, Texas Chainsaw Massacre style, you know, or Wrong Turn, style. And for people from the city, that shit’s scary, you know? So, I don’t know if you saw a documentary about this, but way down in the South they have these crazy churches where they pray with snakes. They bring the snakes into the church-house and they put snakes all over their body and they’re praying and they’re speaking in tongues with snakes crawling all over them and shit… I drove down to Atlanta in a van with two of my camera guys from our company and we shot this video and I directed it. We were knee-deep in the swamp.”